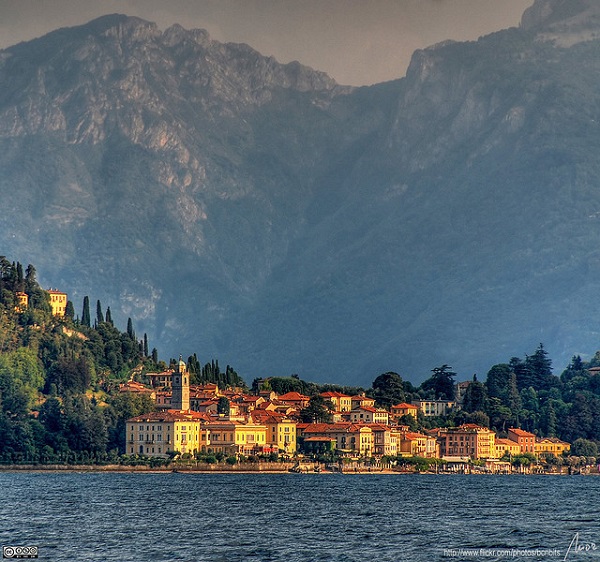 Somewhere into the sixties Como was a bustling city as bedeviled by traffic as any North American town of its size. Funny thing is, is that it retained much of its charm and charismatic air.

Way before this, it was a mere lump of ice, melting and changing form. The final results attracted an array of famous poets- so inspired by its natural beauty.

Romans relaxed in Como, Dante (Tuscan Poet),Virgil and Catullus, the genius Goethe, Longfellow. Poetry may have elegantly expressed the true beauty of Lake Como, but to only describe its beauty vaguely. Ice gouging Southward millions of years ago, scooped out their valleys. The region blends soaring peaks with lush Mediterranean vegetation.

And how right was William Talbot in 1833 as he reflected upon this glorious splendor- he said; “it was during these thoughts that the idea occurred to me if it were possible to cause these natural images to imprint themselves durably, and remain fixed upon paper!”. And a year later he was at work on his idea that today shares the honor of inventing photography along with Frenchman Louis Daguerre.

Invasions of Como were marked on paper throughout history, but nothing compared to the one summer it was invaded by the hippies. Hippies came in, from all over, in turn halting and shattering the village peace with exploding music on transistor radios. The long-hairs hung around monuments looking ever so tousled, and interrupted diners in open-air cafes. Hippies dug their way into Como from Germany, England, France and the United States. They were pests everywhere, but in Como they were a catastrophe.

In post offices and telephone exchanges around Como, clock times differ as much as 15 minutes. Forty years ago an Italian’s response to this was: “Why worry about such a little matter? We are going to be late anyhow”. After a while people learned to accept such casualness towards time.

Como had been a dream as much as it was a nightmare, some centuries ago. It was ruled by Romans, Etruscans and Celts. It was colonized by Caesar (then decayed), it was vandalized by Goths and Ostrogoths. Como was a merry-go-round of French, Austrian and Spanish rule until the middle of the 19th century when it became Italian.

Today the cathedral of Santa Maria Maggiore over stands the city; its entrance doors are flanked in statues of Pliny and the younger Pliny, Roman statesmen owning properties on Como. It was a fine blending of Gothic and Renaissance architecture started in the 14th century.

This cathedral is fascinating with its “Door of the Frog”, in Italian “Porta della Rana,” an intricately carved frog decoration chiseled on by the Como masons and slyly unhinged by vandals. In the 18th century a priest was notified of a treasure of silver and gold which had been buried beneath this frog door. After Como had approved a treasure hunt, they hunted for a week, unfortunately no treasure was found there.

Como’s lake front was lined with a boatman’s heaven specked in hydrofoils, ferries, steamers, sailboats, and the local “Lucias” a rowboat with standing rowers.

One of Como’s best known silk firms was the establishment of Antonio Ratti who’s been established since 1945. He produces silk ties, scarves and rich silk materials. Silk has been grown and woven in Como since the 16th century; it used to be a large part of the economy. At one time a member of the Sforza family, a ruler, required every family living in Como to produce a certain number of silk worm cocoons each year.

Como’s eastern shore was dotted with resorts and Varenna was a favorite with tourists. It was here that in the 6th century lived Queen Theodolinda who once possessed the Iron Crown of the Lombardy Region, one of the most history-laden royal headdress’s in the world.

She was the daughter of the King of Bavaria and married to the king of the Lombards for a short time until she proceeded to marry the Duke of Turin. Theodolinda has left Lake Como another ever important legacy. She ordered a street to be built, known as the “La Strada Regina”, the Queen’s Way, that linked the villages along the western shores. Lake Como, its shore dwellers like to say, is shaped like a man striding westward with his front foot in Como, and his back foot in Lecco. In between these legs is a bluff of delight: at its tip hides the Punta Spartivento, The Point That Parts the Wind.

This is where Bellagio lies, a favorite retreat in the time of the Caesars, and a Mecca for modern travelers. Many nobles and important figures of the past have enjoyed the views, including Stendhal. Composer Franz Liszt paid a lengthy visit in 1837, and here he wrote his lyrical Dante Fantasia. One of Bellagio’s principal attractions is the Villa Serbelloni originally built in the 15th century. In the 1930’s it was purchased by an American-born princess Della Torre e Tasso who in 1959, when she died, left it to the Rockefeller Foundation.

Another great villa on Lake Como is the Villa D’Este right on the lakeshore in Cernobbio, a little ways North of Como. It was turned into one of the most luxurious modern day hotels and in the past it served for Queen Caroline’s residence, the odd wife of England’s George IV.

With Como’s delightion to the eye, it offers a mountain village that warms the soul. It is the village of Premana. The road to Premana is tight, tiring and treacherous and so old that no one could ever keep track of it. It was settled way back to Roman times; its people metalworkers by trade the town is now famous for its production of scissors.