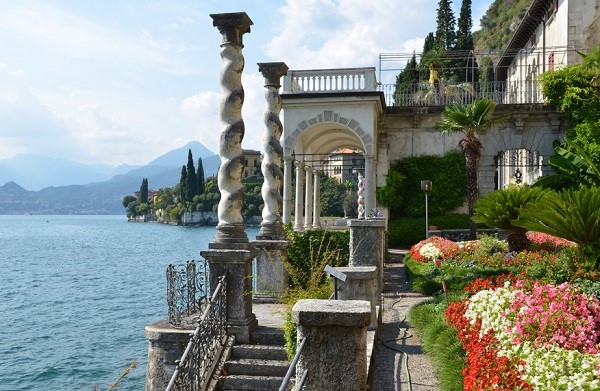 Want to escape the hustle and bustle of Milano? Head a half hour outside the city and you will reach the luxurious and peaceful lake community of Como. Of course, Lake Como is a perfect vacation destination all on its own–just ask its most famous resident: George Clooney. Located in the Lombardy region of Italy, the lake finds its origins in the glaciers that existed here thousands of years ago. The third largest lake in Italy, after Lakes Garda and Maggiore, it is also one of the deepest in Europe. A longtime favorite retreat for Italy’s rich and famous –palaces and villas are commonplace here– Lake Como promises visitors a great time and many wonderful memories.

Lake Como is shaped like a Y with the tip of its northern branch touching the city of Colico and the southern reaching Lecco and Como itself. Several other towns like Varenna, Menaggio and Bellagio are also located along this deep blue lake. The lake is fed by the Adda river, whereas the Lambro originates from the Larian Triangle in the lake district.

Lake Como is very well known for its many beautiful villas, which have been built along the shores of the lake since the days when Pliny the Younger had its two lake resorts, the Tragedia  and the Commedia built. Many villas boast gorgeous gardens that thrive due to the area’s mild climate.

One such structure is Villa Carlotta, built by the Milanese merchant Girogio Clerici in 1690. Located at Tremezzo, which faces the Bellagio peninsula, the villa boasts a large Italian garden filled with gorgeously carved fountains and sculptures.

The famed Villa d’Este is located at Cernobbio and was built by Cardinal Tolomeo Gallio in the year 1568. The villa later became home to Caroline of Brunswick, who would go on to marry King George IV of England. The beautifully landscaped gardens of the villa have been created in a clean and detailed English style. In recent years, the villa has been converted into a luxury hotel that hosts romantic weddings and many celebrities.

Villa del Balbianello is famous for its beautiful terraced gardens. You may recognize it if you watched one of the more recent installments of the 007’s saga, Casino Royale, where the villa is featured. The villa is located on a promontory on the western shore of the lake, close to the Isola Comacina. Built in 1787 on the location of a Franciscan monastery, the luxurious villa was to be the home of Guido Monzio. The villa was donated to FAI (Fondo dell’ Ambiente Italiano,  National Thrust for Italy) with the entirety of its furniture and art pieces. The gardens are a major tourist attraction and so is its interior, turned into  a beautiful museum.  You can take a virtual tour of the villa and its grounds watching this enchanting short.

Villa Melzi was built in Bellagio by Francesco Melzi, the Vice President of the Napoleonic Italian Republic, in 1808. Designed by Giocondo Albertolli following the canon of neo-classical style the villa also boasts a park with orangery, a Japanese garden, a chapel and various beautiful statues.

Como is a city located about 45 kilometers from Milan, on the south western arm of the lake of the same name. The town is quite popular with tourists due to its proximity to the Alps and the omonymomus lake. The city has plenty to offer, including many beautiful churches, theaters, palaces, parks, museums and its cathedral. The main attractions here are Casa del Fascio, the Broletto (the medieval town hall), Teatro Sociale, Tempio Voltiano, and the city’s public gardens including Villa Olmo, Basilica of Sant’Abbondio and the Duomo. The town’s Piazza San Fedele boasts the basilica and many buildings that are centuries old. Take a look at the beauty of Como  and see yourself why people love this quaint town so much. The video is in Italian, but it will give you a good idea of the city’s beauty.

A 50 kilometer drive from Milan will bring you to the south east branch of Lake Como and the city of Lecco, which is flanked to the east and north by towering mountain ranges. The city has many bridges, built to increase trade and transportation between Lecco, Milan and Como.

Three of these bridges cross Lake Como. There is the Alessandro Manzoni Bridge, which dates back to 1985, the Kennedy Bridge from 1956, and the Azzone Visconti Bridge from 1335.

In the small province of Como you will find a quaint town famous for being located at the intersection of the lake’s three branches. This town is Bellagio, known as the Pearl of the Lake. Located at the tip pf the peninsula, Bellagio’s location means that the majestic Alps are located across the lake from the small town. It also boasts winding cobblestoned streets, gorgeous views and perfectly appointed villas like Villa Serbelloni.

If in Bellagio you may want to stop in at the beautiful Villa Melzi d’Eril, built by Giocando Albertolli in 1808. The villa was built for Francesco Melzi d’Eril who had been nominated Duke of Lodi by Napoleon at around the same time. The villa is known for its beautiful English gardens, which were developed along the banks of the lake. The garden is decorated with several artifacts and monuments, many of which had been brought to Bellagio through the Venetian gondolas, as requested by Napoleon himself. The garden has several exotic plants, like groves of azaleas, and many other noteworthy items.

If on the west side of the lake stop at Tempio Voltiano, which holds many items from Alessandro Volta (= volt; he designed the first source of reliable electricity). If you walk a little further you will encounter the Villa d’Olmo, a lake house constructed by Pilny the Elder.

Take the funivia (cable car) to Brunate. The view is seriously second to none. Monte Boletto, also in this area, is perfect for hiking. Tremezzo and Varenna are two picturesque towns that should not be missed and can be easily reached by ferry from many of the other seaside towns.

The Como Lake and its area are among the most picturesque corners of Northern Italy, easily reachable by car and train from Milan, but also a perfect location for a dedicated vacation, away from the stress of large cities.