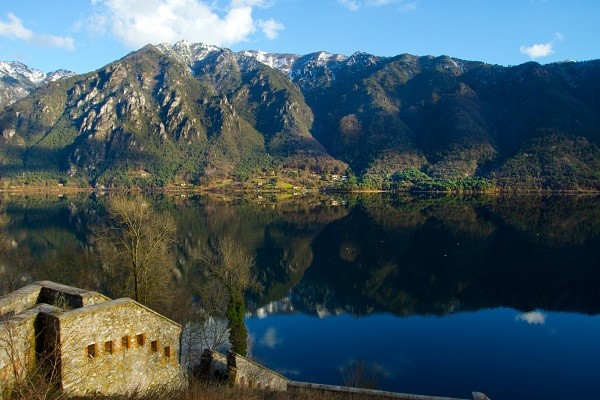 Lake Idro is an Italian pearlpine lake one of the highest in Lombardy. The majority of the lake is part of the Province of Brescia, while the rest falls in the Province of Trento. The surface area of the lake is 11.4km and its maximum depth of 122 meters. Visitors to the area will find beautiful wooded mountains surrounding the lake as well as a shoreline that stretches 24 kilometers and is shared among four communes, Idro, Anfo, Bagolino and Bondone.

At present Lake Idro is facing major challenges due to lack of sufficient sewage systems and the use of its water to generate hydropower and for irrigation. These problems have led to a conflict among the agricultural, environmental and electricity industries.

Lake Idro is small but fantastic, a blue patch in the middle of green woods and mountains, with meadows that run gently down to the deep blue water. Famous for its trout fishing the lake is favored for its constant wind speeds, perfect for sailing, and the small amount of motor boats on its waters. Boats on Lake Idro can not have more than a 10 HP engine. Bathers also enjoy the lake because of its mild temperatures and easy beach access.

Lake Idro is centrally located and is a great base for visitors who would also like to take day trips to nearby lakes and resorts. The western coast of the famous Lake Garda is just 30km away via Valle di Ledro, famous for its prehistoric pile dwellings and beautiful lake. If you visit lakeside towns like Riva, Gargnano and Limone be sure to return to Lake Idro through the charming Val Vestino to see the unique beauty of the emerald green lake. You can also drive 60km to Madonna di Campiglio to see the Brenta Dolomites, where world skiing championships are held during the winter months.

An hour and a half drive from Lake Idro one will find the city of Verona, famous as the setting of Shakespeare’s Romeo and Juliet, while Venice is 220km away. Venice is one of the most famous cities in the world, reknowned for its palazzos, museums, churches and, of course, its romantic gondolas. Just a fifty minute drive from Lake Idro is the city of Brescia, a city marked by the greats of art, literature and poetry.

Aside from its lake the city of Idro is also the site of important discoveries related to the prehistoric and Roman periods. Buildings from these excavations can still be seen today. The small Brescian town of Anfo can be found on the west cost of Lake Idro and is located about 1,312 feet above sea level, which means beautiful views. The quaint village is a wonderful place to visit and is not filled with a crush of tourists as some other places in the area.

Bagolino is an attractive mountain tourist destination and is located in the northern region of Val Sabbia. The town area of Bagolino limits the province of Valtrompia and Vallecamonica in the west and Trento in the east, connecting them via the pass of Giogo del Maniva and the pass of Crocedomini. The superb monument of Adamello and the Cornone del Blomone mountain dominate the village. While in Bagolina make sure to visit its historical monuments like the Church of San Giorgio, the third largest in the province of Brescia, and take time to see the remarkable frescoes on farmhouses and houses dotted around the area. These frescoes were originally painted to protect the inhabitants from illness and calamity.

Many of the houses in the area are notably tall, many attached, and decorated with porches, underpasses, terraces and balconies. Several structures can also be seen built into the cliffs in the area. The town’s cemetery is also something to see with its Neo-Gothic family chapels, especially the only one made of granite, which is quite stylish.

The town also has a delightful festival every year around Carnival, in the days before Shrove Tuesday, which features dancers and musicians in lavish outfits.

Visit Lake Idro for wonderful fishing, sailing and bathing, as well as a dazzling natural landscape. The cities around the lake all hold their own charms and ensure any vacation in the area will be one filled with discoveries and delights.