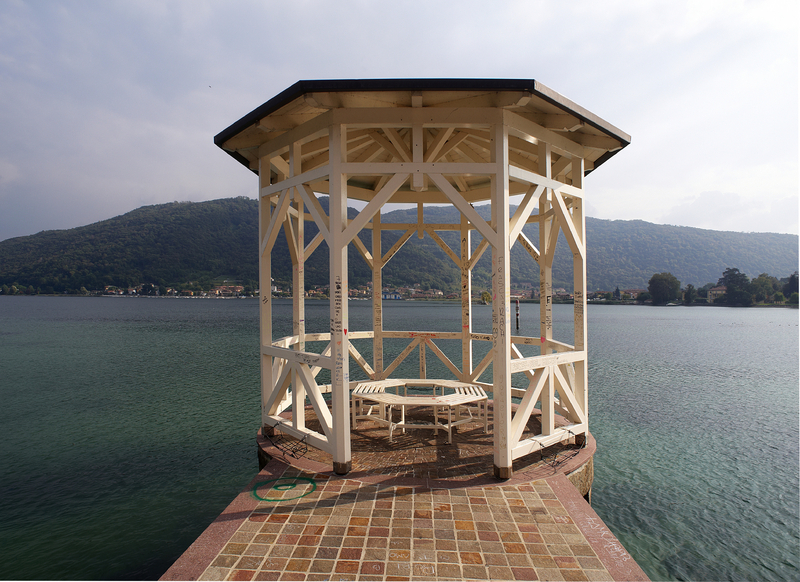 Split between Bergamo and Brescia, in a heavily industrialized area, you will find the surprise gem that goes by two different names—Lake Iseo (Lago d’Iseo) or Sebino. Despite the modernity in the towns of the area there are many spots along the lake’s coastline that are both picturesque and naturally beautiful. Fed by the Oglio River the lake is located near the Val Camonica area of northern Italy, and is surrounded by several beautiful villages, winding roads carved out of towering mountains and gorgeous islands like Monte Isola, the largest lake island in southern Europe.

Lake Iseo is also the seat of two of the most beautiful villages of Italy, two little towns that are members of the “Borghi più belli d’Italia” club: Monte Isola and Lovere.

Montisola or Monte Isola belongs to the province of Brescia, which is located in the Lombardy region of Italy. The large island is one of the most important tourist destinations in the Lake Iseo area as it boasts several charming fishing villages as well as the eponymous town of Monte Isola, which is also quite small and very beautiful.

Looking for charm and a laidback pace? Then Peschiera Maraglio, a small village on the island largely populated by fishermen, is for you. You may also want to visit towns like Carzano, Sensole and Siviano as well as Cure, the highest point on Monte Isola. Cure is famous for its religious sanctuary, which is definitely an important spot in the area. The island also has two smaller lakes—San Paolo and Loreto—both of which are privately owned.

Iseo, the namesake of the lake on whose shore it sits, is a charming town in the Brescia province known for wide piazzas surrounded by historic buildings. The town’s lakeside promenade is quite popular with the locals as well as visitors to the area. A fun fact: the first ever monument to Giuseppe Garibaldi was erected in Iseo.

Archaeological remains uncovered here make it clear that the area has been settled since prehistoric times. In the past Iseo was a hub of commerce and trade for the Cenomani, Camuni and Reti populations due to its port. Due to Iseo’s location along the road that led to the Guglielmo Mount, locals used to impose tolls on passing tourists adding to the wealth of the town.

In the 1st century BC the town was located along the heavily travelled Via Valeriana, which meant that it wasn’t long before Roman influence reached Iseo. When excavations began in the 6th century for the construction for the Saint Andrea Church, an artefact was unearthed connected to the Labors of Hercules, which had belonged to an ancient Roman temple that had once stood in the area.

At the northern tip of the lake you will find Pisogne, a town full of interesting historical structures that draw tourists every year. You will likely want to stop in at the Church of Santa Maria della Neve, which is located on the outskirts of the town and boasts beautiful frescoes by Romanino. There are also several other churches in town that are worth a visit as well as the main road, which runs along the shoreline of the lake and is especially picturesque.

The locals take their daily passeggiata along Lungaloga Tempini, a narrow pedestrian road that also runs along the shore of the lake. Something you will likely notice if visiting Pisogne is that the locals have their own dialect and a very strong accent.

Sarnico is located along the lake’s shores and is protected by massive hills. An important commercial center, the town is also a popular tourist destination. The climate here is relatively temperate year round and the scenery is spectacular—the imposing hills provide a dramatic backdrop to the charming village and pristine lake. On the outskirts of town you will find many lush green spaces as well as luxurious villas and visitors and locals both like to head to the lake’s shore to sunbathe and participate in outdoor activities.

Lovere is a town in the Bergamo province and is located on the northwestern end of Lake Iseo. The town is most famous for some unique architecture—namely its houses with overhanging wooden roofs that are typically Swiss paired with very Italian stone arcades. The town faces the lake and is surrounded on its other side by towering mountains. Not convinced about visiting? Lovere has been named one of the most beautiful boroughs in all of Italy.

There are several great places to visit in Lovere such as the Santa Maria in Valvendra church. The church was first built in the Gothic fashion in 1473 and in later years Renaissance elements were added. The church is known for its beautiful artwork and paintings by noted artists like Piero Marone, Domenico Carpinoni and Gian Paolo Cavagna. The Palazzo Tadini, also in Lovere, has an art gallery with an amazing collection of artwork from noted artists like Elisabetta Sirani, Pietro Ricchi, Santo Prunati, Carlo Francesco Nuvolone, Jacopo Ligozzi, Pietro Damini, Giovanni Battista Crespi and Giovanni Giacomo Barbelli.

You can view Gian Paolo Cavagna’s Last Supper and Pama the Younger’s Trinity with the Virgin at San Giorgio Church, which was built in 1263. You may also want to visit the Santa Chiara Monastery, which is home to artwork by Sebastiano Conca. The town’s Castelliere was built in the 3rd century BC and is the oldest in the region.

If you are on holiday by Lake Iseo, you should also consider a visit to the Valcamonica, a long valley situated north of the lake. The rock drawings discovered here are the first prehistoric symbols of their kind found in the world and they are recognized as a Unesco World Heritage Site.

Visit Lake Iseo and get drawn into a world of charming villages, gorgeous natural wonders and as much—or as little—do to as you please.