Of the three large pre alpine lakes of Italy, Lake Maggiore is the westernmost and the second largest after Lake Garda. The lake acts as a border between Lombardy and Piedmont and a part of it also sits in Switzerland (which can be reached from Italy either by train or by a short ferry ride.)

Lake Maggiore is less crowded than Lake Garda and less glitzy than Lake Como, offering one of the most relaxed and natural experiences of all the grand Italian lakes. Although Maggiore is best enjoyed between May and October, its climate is relatively mild throughout the year, producing a bounty of Mediterranean vegetation and exotic flora that can be viewed in one of the many, beautiful gardens located on its shores. Whether you are looking for rest and relaxation, sightseeing, or outdoor activities this lake will certainly offer something enjoyable to do.

Lake Maggiore is framed by blue skies, lush greenery and the imposing Monte Rosa. Don’t be fooled by the name, however, Monte Rosa isn’t one mountain but a massif with ten peaks covered in glaciers. Only a 50 kilometer drive from the lake itself, this mountain is a glory to behold and explore.

Around the lake you will find various mountainous  areas and hilly villages that offer fabulous scenery. These towns are full of great architecture and ancient legends and traditions. They also have many winding roads you can explore on foot and are the starting point for tours that allow you to venture into the lands around them. Valle Anzasca with the Walser habitat of Macugnaga, Val Formazza and the Toce Falls, Val Vigezzo (called “Painter’s Valley” because of its vibrant colors), and Valle Antrong and its alpine tarns are all wonderful places to visit.

If you want to experience the true natural splendor of the area then the best place to go is Val Grande National Park. The wilderness and pristine beauty of this park is truly worth the trip.

What to See at Lake Maggiore

Stresa and the Islands

In addition to the locations we already suggested, there are several other celebrated places in the Lake Maggiore area perfect for a vacation.

Stresa is a fantastic town to stay if you’d like a taste of old style luxury. If you really want to live it up, check into the Grand Hotel des Iles Borromées, an amazing 5 Star hotel, with restaurants, boutiques and a well known spa: expensive, for sure, but also offering some interesting discounts! Literary buffs will be excited to learn that Hemingway lived here when the building used to be a hospital during World War I and set parts of the classic Farewell to Arms in the area as well.

The islands around Lake Maggiore, known as the Isole Borromee (or Borromean Islands, in English), are all worth visiting if you are in the area.

Isola Bella (“Beautiful Island”) is aptly named and the architecture adds some man-made drama to a gorgeous natural landscape. The Borromeo counts transformed a bare rock into a 17th century lavish palace. Lush gardens were strategically designed using transported soils. In the garden sits an amphitheatre for guests to watch theatre showings. Be sure to check out the glorious Baroque palace on the island. Pretend to be there, even though only for a few minutes, while watching this video:

Another option is Isola Madre where the ancient Borromeo family has their home. The Borromeos are members of the eldest Italian aristocracy, famous for having provided several cardinals to the Catholic church. Today the family is associated to other members of European nobility (Beatrice, one of youngest heir to the family, is married to Pierre Casiraghi, future Prince of Monaco), as well as to the best known families of Italian entrepreneurship: Agnelli’s heir John Elkann, married blue blooded Lavinia Borromeo on the Isola Bella in 2004. The event took place at the bride’s family’s palazzo on the island. The following year, Lavinia’s sister Isabella wed Api heir Ugo Brachetti Peretti, in the area.

The tradition continues, as in 2015 Beatrice Borromeo married Pierre Casiraghi at the Borromean Islands; she wore an Alberta Ferretti dress the day before the wedding, and first a Valentino and later an Armani dress on her wedding day.

Isola dei Pescatori or Fisherman’s Island is just that: home to fishermen who toil in the area. This island is gorgeous and chock-full of visitors during the high season. If you wish to visit, you can do so on a short day trip from Stresa. It is the smallest of the Isole Borromee, yet one of the most charming: it is the only one of all the islands to be lived in all year round (50 people call it home) and it is only about 100 metres wide per 350 metres long.

If you are not yet convinced about the beauty of Lake Maggiore and its Islands, the video here will finally make you a lover of the area.

Nine kilometers from Stresa is the village of Angera and its castle, Rocca di Angera. La Rocca was constructed in the 11th century and bought hundreds of years later by the Borromeos. It is now the site of many medieval-themed events that contribute to the creation of a unique, timeless atmosphere. Take a look at what happens during one of these amazing reenactments:

For a fun excursion take the Lago Maggiore Express, a train ride that connects Stresa to the Swiss town of Locarno: the train winds through Italy and Switzerland, passing through the Valle Vergozza and Centovalli, then returns to Stresa via a regular FF.SS line. The Lake Maggiore Express is a pretty popular choice among tourists, so remember to book your ticket in advance, especially during the Summer months!

An attraction unique to Lago Maggiore can be found on the lake’s eastern banks. Santa Caterina del Sasso is located on the steep cliffs of Sasso Ballaro and has a history that enhances the beauty of its location. In the 12th century, Alberto Besozzi was a wealthy merchant , but when his boat capsized on the lake he found himself praying to St. Catherine of Alessandria for assistance. Besozzi was eventually saved by a wave that swept him to the shore and he thanked the saint by shutting himself up in a cave for the next 40 years. in the 13th century, a monastery was built on the site, only to be closed four centuries later, in 1770, by the Augsburg. Today this marvel of faith and engineering is used for concerts during the local week-long music festival. 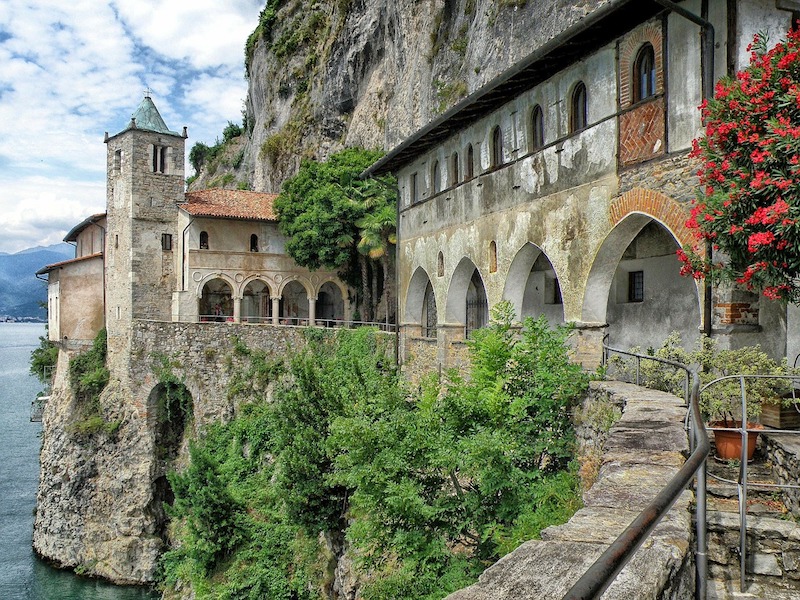 If you would like to dedicate your time to the beauty of the Alps, the area around Lake Maggiore is also perfect. The Valle Anzasca, wild and beautiful, is perfect for all those who want to enjoy nature at its roughest and to truly appreciate the sheer perfection of nature. At the very end of this valley rests the quaint village of Macugnaga, that we already briefly mentioned at the beginning of this article. Situated at the feet of the Dufourspitze, one of the peaks forming the Monte Rosa Massif, Macugnaga was originally founded by Germanic Walser settlers, who came from the Wallis in Switzerland. Charming and relaxing both in Summer and Winter, this village is perfect to have a taste of local traditions and to ski during the Winter, if you are the sporty type!

Last, but not least you must try the view from the top of the Monte Mottarone. You can easily reach it by cable and enjoy the world from a height of 4.921 feet. It is said that, on a clear day, you can even see Milan’s Duomo. Once again, if you are a sporty type and you are around in the winter months, you may be happy to know Monte Mattarone is also a well like skiing destination.

Summer or Winter, Lake Maggiore is not only beautiful and relaxing, it also offers many activities options.