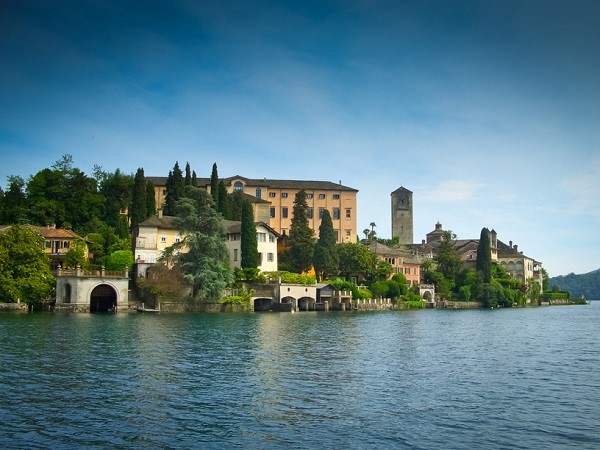 The Lake, Once Described as a “Pearl” by Balzac, is a Treasure Waiting to be Discovered

Lake Orta and its surroundings are quiet, beautiful and filled with gorgeous architecture. It is an enchanting spot, much less crowded than the larger lakes in the area. Located in northern Italy, in the Piemonte region, on the west side of Lago Maggiore, the modern name of the lake was bestowed in the 16th century. Previously. it was known as Lago di San Giulio, after the area’s patron saint. While you’re at Orta it may seem as if you are in another world, but the truth is the area is quite close to other cities. It is only 35 km away from Novara by train and, in the north it is 6 km away from the Troce Gravellona railway station, meaning that Lake Orta is not only gorgeous, but accessible and convenient.

Lake Orta’s visitors never forget the experience: just take Friedrich Nietzsche who referenced the lake in his Thus Spake Zarathustra. Nietzsche believed that his trip had changed him and wrote of his life in terms of Before Orta and After Orta. Similarly, Honoré de Balzac gushed over the lake, writing that it is a “grey pearl in a green jewel-box.” The lake and its surrounding locations are classic Italian and the island of San Giulio boasts many beautiful buildings. Other than the island, the main tourist attraction around the lake is the town of Orta San Giulio a charming town built on a peninsula in the middle of the lake. Omegna, to the north, is also a town worth seeing.

Centuries ago, San Giulio Island was chosen as the seat of the Dukes of Novara. A document dated 962 cites the Bishop of Novara as having control over the island. Fortifications and foundations were built on the island to serve as castles for the ducal family,  and locations like Soriso, Gozzano, Lortallo, Buccione, Carcegna and Orta were thus born. The island’s location made it a strategic choice, although the beauty of the area likely didn’t hurt.

At the beginning of the 16th century, the region around the lake suffered several crises. This era saw the end of the Sforzas reign in Milan and, in 1522, Orta was sacked by Captain Anchise Visconti. A heavy tax was imposed on the area and many wealthy citizens would eventually be taken hostage. These nobles were only released after ransom was paid.

In 1767 the area was signed over to King Charles Emanuel III who would possess dominion over San Giulio, Orta, Soriso and Gozzano. The Bishop of Novara was allowed to retain the title of Prince of San Giulio and was given temporary rule over the Riviera. By 1817 the entire region of Piedmont, hence also Orta, was ruled over by Victor Emanuel I of Savoia and the bishops lost all their feudal rights. Their only possessions in the area remained the Island of San Giulio, the palaces of Gozzano and their castle.

Founded in 390 by its namesake, the Basilica di San Giulio is one of the don’t-miss sights in the area. The saint was a builder of churches along with his brother and it is said he had built 99 churches before arriving in Orta to begin work on his 100th. According to legend, San Giulio also had the ability to control wild animals, human beings and natural elements. It is said that when San Giulio arrived in Orta the land was plagued by a giant serpent, which the saint quickly dispatched with a wave of his hand.

During the Siege of Otto in 956, the Basilica was severely damaged and, except for the central apse, everything was destroyed. When Otto the Great handed over the land in 962, the church was then reconstructed and a tower was added in the 11th century. If you are visiting San Giulio today, you will find many beautiful pieces of art and frescoes to admire. According to scholars many of the frescoes, which have recently been restored, date back to as early as 1421. The most impressive work in the basilica, however, is the ambo. The pulpit is carved out of grey-green serpentine taken from a nearby quarry.

Other than the basilica there are several other important monuments to visit on the island, including elegant villas. In 1763, an edict was issued that every residence had to be named after a particular saint so that they could be recognized easily. Villa Tallone is the center of attraction every year in June, when the Festival of Ancient Music takes place on the island. The prestigious event is organized by the Amici della Musica of Novara and during the time of the festival various concerts and celebrations are held.

Orta San Giulio is one of the most important tourist destinations along the lake. The town is quite small and is located 40 km from Novara. Built on a promontory that juts out from the lake’s eastern bank, it is also located quite close to San Giulio Island. On a nearby hill, you will find the small village of Legro, while 2 km to the south there is Corconio and several other small vilages like Imola that you will likely enjoy visiting.

Orta San Giulio is fascinating to visit and, even though small, has many places to explore. The town has many important historical buildings and churches as well as a Sacro Monte, a pilgrimage site located nearby. The site is also an island and was listed by UNESCO as a World Heritage Site in 2003.

If you would like to relax and marvel at nature’s beauty, or explore small villages and historic towns then Lake Orta is the perfect place for you. Discover this gem of a lake at your own pace, which is just how the locals live.