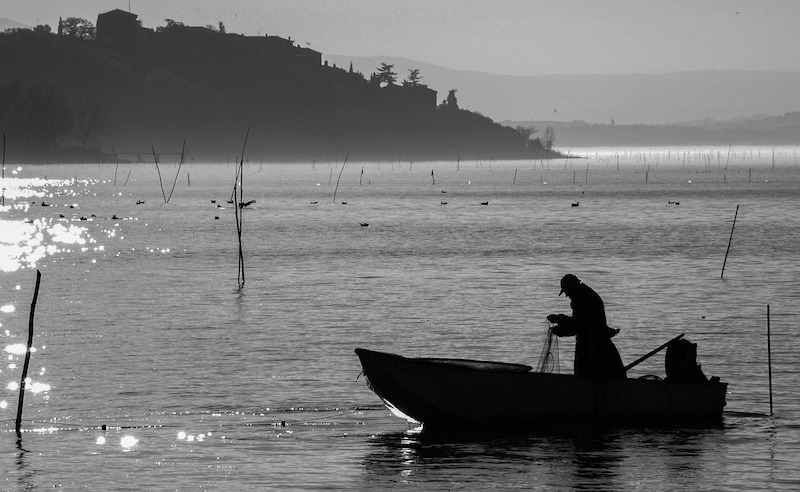 Lake Trasimeno is also known as Lake Thrasimene or Trasimene. Located south of the River Po, the lake covers an area of 128 sq km which is only slightly less than Lake Como. The River Tiber flows a few kilometers away from Trasimeno, but the two are separated by hills. No other major lakes flow in or out of Trasimeno and the level of its water can fluctuate wildly depending on the amount of rainfall and the water utilized by nearby towns.

History of the Lake

Three million years ago the location of Lake Trasimeno was a shallow sea. A depression formed due to geological fractures, which caused the formation of the lake. In the earlier days Lake Trasimeno was known as Lake of Perugia since it was quite important to the entire Umbria region as well as for the Tuscan Chiana district. Trasimeno is actually a mythological figure who joined a nymph from Agello called Agilla. Agello today is between Trasimeno and Perugia, but it was once an island on the lake.

The northern shore of the lake was the location of the Battle of Lake Trasimeno, which took place in 217 BC. The exact location of the battle is not known since the lake extended further north in those times.

The Etruscans were the first civilization to inhabit the area and their cities of Crotona, Chiusi and Perugia are all within 20 kilometers of the lake. The Romans then followed and their ruins can be found in Castiglione del Lago, whose main streets here are structured and designed like a chess board.

Half the shoreline of the lake is surrounded by hills, which are covered with olives. Olives being the main agricultural resource in the region. Close to Tuscany on the western shores of the lake, there are plenty of vineyards and the area is known for its vegetables and fruits. In the western region, the hills are lower in altitude and the climate is also quite warm. The vegetation in this area includes poplars, willows and pines.

There are three islands in Lake Trasimeno and the only inhabited island among these is the Isola Maggiore, which is the second largest. Once a small fishing village the island reached its height of fame and fortune in the 14th century. Today there are very few residents and most of the buildings on the island are from the 1300s. One of these structures is the Franciscan monastery, which is in ruins.

Aside from the natural beauty of the area, the main attractions for tourists in the area of Lake Trasimeno are the many castles along the shore line. Several of these castles are located in the center of small villages and towns while many others are in isolated locations. Montali Castle and Zocco Castle are located on hilltops while the islands of Polvese, Maggiore and Magione also have their own castles.

Guglielmi Castle is located in Maggiore and was built in the 1800s at the location of an ancient Franciscan church. The castle was quite famous in the area of Lake Trasimeno and has been frequented by various artists, intellectuals and nobles over time. The castle is now in ruins and has been closed to visitors since 1998 while it is restored and is now on sale.

The ancient Zocco Castle, located between San Feliciano and Monte del Lago, is also unfortunately in ruins. The castle is privately owned and is one of the largest in the area. The castle is famous for its untouched interior medieval decorations. Although no longer inhabited visitors to the area can view the impressive structure from the outside.

The Vernazzano Leaning Tower is not as famous as the Leaning Tower of Pisa, though it leans more than its cousin in Pisa. The tower was built in 1089 when the entire castle had been donated by the Marchiones family to Città di Castello’s monastery. The castle, tower and the settlements in Vernazzano were damaged in the 1400s by war and later by a major earthquake.

The tower began to lean in the 18th century due to the erosion of the foundations due to the elements. The tower has been abandoned for over 300 years, after which new settlments were built away from it.

In order to avoid the collapse of the tower steel reinforcements were later added. Perhaps the Vernazzano Tower is not as famous as Pisa’s due to its isolated location, which is not very easily accessible.