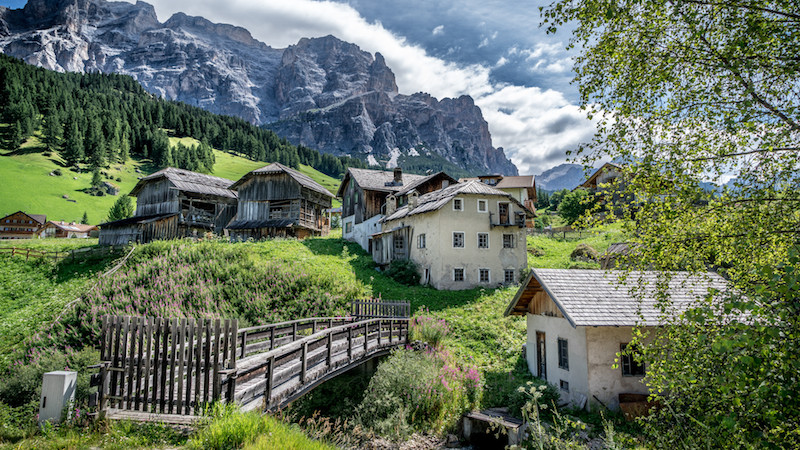 The Dolomites in Italy consist of a mountain range in the northern Alps. Eighteen peaks in all, which are located at an altitude of over 3,000 meters and that cover an area of 141,903 hectares. The mountains feature one of the world’s most beautiful landscapes with their vertical walls, long and deep valleys and sheer cliffs. While the Dolomites are visually stunning and internationally reknowned the area is plagued by frequent landslides, avalanches and floods.

The Dolomites are a part of the mountain range of the Italian Alps. They are mostly spread in the province of Belluno and to a lesser degree in the provinces of Trento and Bolzano-Bozen, all of which are located in the north eastern part of Italy. The mountains span the Piave Valley in the east and the Adige River in the west, the Suguana Vally in the south and the Puster Valley in the north. The Dolomites also consist of the Western Dolomites, known also as the Brenta Group, and the Small Dolomites or the Piccole Dolomiti. There are several high peaks and a national park in the area. The Dolomites were declared a World Heritage Site in 2009.

History of the Dolomites

At the time of the First World War, the border between the Hungarian-Austro and Italian troops ran through the area of the Dolomites. There are several open-air war museums at the Five Towers known as Cinque Torri and Mount Lagazuoi, which gives a glimpse into the history of the area. Many visit the Dolomites for climbing the Vie Ferrate, which were protected paths created during the war.

There are several long footpaths that run for long distances over the Dolomites, known as High Paths or Alte Vie. These trails are numbered one to eight and are dotted with several tourists huts along the way. The most famous of these is the Alta Via 1.

Tourism in the Dolomites

The Dolomites are a famous tourist destination. During the winter months the mountain slopes are perfect for skiing and mountain climbing. The area is also famous for excursions, base jumping and rock climbing.

During the summer months the area is popular for free climbing, paragliding and hang gliding. Since 1887, Free Climbing has been a popular tradition in the Dolomites.

The main tourist centers in the region include the Rocca Pietore, which is located close to the Marmolada glacier, and small towns like Cortina d’Ampezzo, Auronzo, Falcade and Alleghe. The Valleys of Badia, Fassa and Gardena are also quite popular. An annual road bicycle race is organized every July, which draws tourists from all over the world.

Some places you may want to visit if you make it to the area of the Dolomites:

Alleghe is a small village in the Belluno province in the region of Veneto. The village is located close to the Alleghe Lake. The lake was formed by a landslide in 1771 from Mount Piz. The area has been inhabited since the 12th century BC and today the economy is mainly based on tourism.

The most popular things to do in Alleghe is ski and mountain climb. The tallest peak in the area is known to be a popular climbing spot since it rises to an altitude of 3,220 meters. The lake located close to the village is also a popular spot for ice hockey and ice skating in the winter.

Falcade is a comune located in the Belluno Province in the Veneto region. It is located 110 km from Venice and 35 km from Belluno. Falcade is made of subdivisions of hamlets and villages like Le Fratee, Somor, Valt, Caviola, Sappade and Marmolada.

Falcade is located close to the famous Trevalli ski region, which is an area of 100 km stretching between Trentino and Veneto. This is a part of the super ski area in the Dolomites. It is also a very popular tourist destination for mountain biking and hiking in the summer months. Some of the most popular landmarks in Falcade include the Mulaz, Focobon and the Church of Falcade.

Auronzo di Cadore is a comune located in the Belluno province in the Veneto region. It is located 120 km from Venice and 50 km from Belluno. The municipality is home to the Tre Cime di Lavaredo, which is a very popular mountain group and is famous for its many winter sport activities.

Cortina d’Ampezzo is a town located in the Belluno Province. The town is a typical alpine valley and is located right in the heart of the Dolomites. It is a very popular location for winter sport activities. It is mostly known for its arious ski slopes, beautiful natural scenes, many shops and its good quality accommodations. The James Bond film For Your Eyes Only was filmed in the area as was Sylvester Stallone’s Cliffhanger.

The Dolomites are one of Italy’s most famous tourist attractions, drawing people from all corners with its natural beauty and fantastic ski slopes.