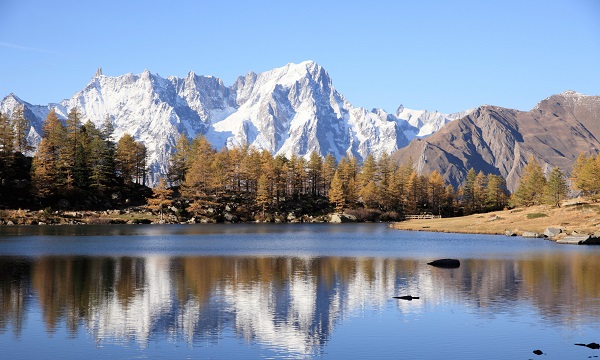 When thinking of Italy, most people think of art and culture, history and great food, even beaches and gorgeous vistas, but many often forget that it is also a country of some of the world’s most breathtaking mountains.

If you want stunning panoramas and glamorous ski resorts, then Italy is definitely for you. In this new series we’ll be listing the Top 10 Italian Mountains, and a few of their characteristics, so you can get to know each a little better.

Monte Bianco is not just the highest mountain of Italy, but also of the whole of Europe. It is shared by Italy and France and there is a tunnel running through it (Il Traforo del Monte Bianco, about 11 ½ kilometers long) that connects the two countries. An interesting tidbit is that Monte Bianco hosted the first ever Winter Olympics: we think that’s quite a claim to fame!

Not surprisingly, the mountain got its name from its constantly white peaks. Indeed, Monte Bianco is covered in snow all year round and offers a dazzling view both from above and from sea level.

This peak stands alone, although taking into account the overall mythology of the area it can also be considered a spinoff of Monte Bianco. Monte Bianco di Courmayeur is the second highest peak in Italy and the first mountain declared entirely on Italian territory, although there is an ongoing dispute whether it does touch the border with France.

The morphology, as well as the flora and the fauna, are the same as the Mother mountain, as they are both part of the same massif.

This mountain is right on the Swiss border, and the peak is indeed only in Swiss territory (making it the highest in Switzerland). The base of the mountain, however, is shared by both Italy and Switzerland. The Italians named the mountain Rosa from local slang for the word “glacier;” however, one would not be hard pressed to believe that the name also came from the pinkish tones reflected on the massif at sunset (rosa in Italian means “pink.”) Like Monte Bianco, the snow on Monte Rosa lasts all year long.

This mountain can also be considered a sort of sub peak, if you will, of Monte Rosa, but considering its height it deserves to be looked at on its own. Indeed Grenzgipfel can be measured as the third highest peak in Italy, and the highest peak of the Monte Rosa massif on Italian territory, although it is still shared with Switzerland.

Still belonging to the group on Monte Rosa, this is the second highest peak of the massif. The climb to the top of Punta Nordend is hard, but certainly within the means of expert climbers. It has a wonderful view of the Alps and the Italian-Swiss territories.

Also belonging to the Monte Rosa massif, its name comes from one of the climbers who were on the original expeditions, which in 1820 discovered and conquered the peak.

Like the others mentioned above, this peak also is part of the Monte Rosa massif. It takes its name from Father Gnifetti, who climbed the peak first. This mountain is probably the one that attracts more tourists and climbers, as it is simpler to climb than others. It is also important to note the presence of the refuge Regina Margherita, named after the former Queen of Italy and recorded as the highest mountain hut in Europe.

On the southern side of the Monte Rosa group, this peak is named after a man who actually did not reach its summit. The name is an interesting sign of respect for Mr Parrot, who was a doctor and an active climber in the early decades of the 1800s.

There is no special data on this peak, though it is worth mentioning, as it is a legitimate member of the “above 4000 meter club.”

The name comes from its peculiar shape – that of a nose, obviously – and although a peak over 4000 meters, it is considered a secondary peak. It is located in the region of Val d’Aosta.