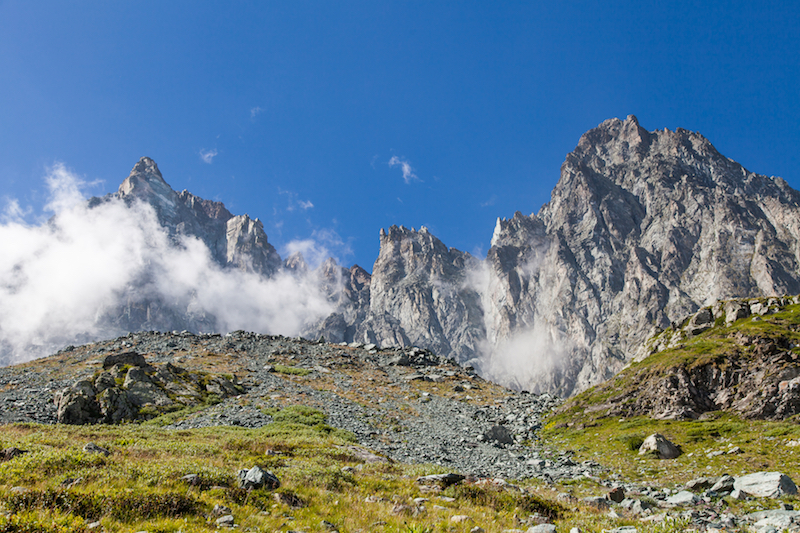 Just about 100 miles northeast of Rome, in the heart of Abruzzi, is one of the most interesting mountains in Italy, the Gran Sasso. It is great to climb, and also a marvellous place to simply trek. The Gran Sasso is actually made of three peaks and it features snow almost all year long, as well as a perennial glacier. Unfortunately, the glacier has been melting and could disappear in the next decade or so.

At the middle lower level of the Gran Sasso lies an expansive flat site called Campo Imperatore, in which sits a hotel with a restaurant; this area is the main base camp for trekkers and climbers before they initiate their excursions. Campo Imperatore is also famous for being the oldest skiing station in the country.

The Gran Sasso is part of a large national park, which is home to three almost extinct animals: the Marsican bear, the wolf of the Apennine, and a rare variety of eagle that is really the only kind of eagle in Italy. All those animals are difficult to spot, but when they come into view, they make a remarkable event.

Aside from its natural elements, the Gran Sasso is also home to one of the most important nuclear physics labs in the world. Indeed, in a scenery closely reminding a still shot from a James Bond movie, over a mile underneath the rock, a few hundred international scientists work every day, their research often involving their famous colleagues of the CERN.

The Dolomites are altogether an amazing groups of mountains, famous for their peculiar rocks, as well their climbing walls. They are internationally renowned, to the point that they have been featured in several Hollywood productions, including Sylvester Stallone’s blockbuster Cliffhanger.

The Marmolada is the most famous mountain of the Dolomites as well as the tallest, and it features the largest glacier in the area. This makes it one of the most attractive in Europe and one of the busiest in terms of tourism. It is relatively close to gorgeous places like Fazza’s Valley and Cortina d’Ampezzo, which is the Aspen of Italy, making the entire area one of the best skiing environments in the entire world.

This mountain is very dear and very famous to all Italians, as it is where the longest Italian river, the Po, is born. Therefore, after the Mount Bianco (the highest mountain of Italy and Europe) Monviso is probably the most memorized and studied mountain name by Italian students.

The Monviso is split between Italy and France, however the peak is entirely in the Italian territory. Differently from other mountains, whose peaks are named after climbers or scientists, the Monviso features names after Italian cities or major figures of Italian culture, such as Dante.

Besides being the starting point of the Po, the Monviso is very famous for being a stand alone mountain and for its interesting shape, which an urban legend wants to be the actual logo of (or at least the inspiration for) Paramount Pictures that the entire world is so familiar with.

An almost perennial fog also characterizes this mountain, however the fog doesn’t seem to scare away the hundreds of hundreds of climbers that venture the mountain every year, making it one of the most visited in the Alps, and unfortunately one with the highest record of deaths in history.

Due the high volume of tourists there are many refuges where people can rest and lodge; these refuges are all scattered around the base of the mountain, and many simply prefer to walk around it, rather than up and down.

This massif is not known for its heights, indeed its peaks are sort of short and round, almost like tall hills. But it’s a major landmark in the island of Sardinia and it definitely played a strong role in the history of the region; therefore, let’s spend a few words about it.

Let’s start with the name, which is Sardinian for “Silver Door”. From a geological point of view, Gennargentu’s rocks are among the oldest in the world. The area where Gennargentu stands is also a national protected natural park that features some unique flora and fauna. So, for those only going to Sardinia to enjoy its extraordinary beaches, perhaps it’s time to take a little detour to this mountain site and see something a little different.

This may be considered one of the most interesting mountains in the country, as it is a volcano, and a very active one at that. It is, in fact, the highest volcano in Europe and stands as one of the symbols and landmarks of not only Sicily, but the entire Mediterranean. The unique characteristic of Mount Etna is its location right above the sea, allowing snow in the spring, while people just a few miles down the road swim. Etna has indeed a fully developed skiing station and in winter time it is a magic sight to see the lava melting the snow.

During the summer months, the dry peak of the volcano truly reminds of a lunar environment, something that definitely you don’t see every day.

The overall area of the volcano is over 100 miles wide and it’s safe to say that the natural elements brought by the volcano have a strong effect on the entire eastern coast of Sicily, making it a very fertile land that, in combination with other factors, allows for the growth of some of the tastiest and richest fruit and vegetables on Earth.

For those who are in in Sicily for the first time, witnessing Mount Etna erupting at night time is a real treat. It’s certainly a natural show second to no other, with magical colors and extraordinarily emotional, too. Occasionally, it is possible to be submerged by a rain of ashes, which is not always pleasant, but often under control, and even that is an experience of a lifetime. The cities right by the volcano and all the way down to the sea, starting with the city of Catania, were all touched by the lava one way or another, therefore lava stone is a main element in their architecture, and is often used for streets and houses.

A night eruption of Mount Etna, as witnessed from Taormina.

This is the second most important volcano in Italy, still very much active, although it has not erupted in a few decades. That has not stopped the dangerous building of houses all over the mountain and, although there is a great park that is supposed to be protected area, construction continues wildly. Nobody wants a modern Pompeii, but that is exactly what has been set up to happen. Indeed, in 79 BC, in one of the most famous eruptions in the history of our planet, the cities of Pompeii and Herculaneum were totally covered by ashes and lava, to be found almost intact centuries later, sadly along with the bodies of their dead citizens. And that is what makes that eruption even more tragic, because, after centuries, it was possible to actually see people being taken by surprise by death, their emotions still frozen on their faces.

Mount Vesuvius is today under constant monitoring by both the government and scientific agencies, and there are many evacuation plans in place. However, from a naturalistic point of view, Vesuvius remains a great attraction and it’s a true joy to look at. Until a few years ago, it was possible to see smoke coming out of its peak, a truly iconic view of Naples and its bay.