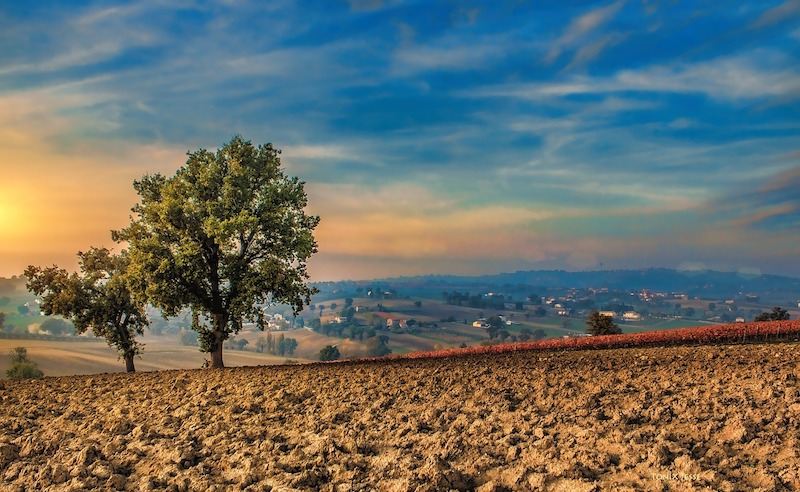 Archeological data suggest that man has inhabited the region of Umbria since the Palaeolithic period, but it wasn’t until the 6th century BC that the beginnings of Umbria as we know it now were formed. During this time the region was inhabited by a tribe known as the Umbri who spoke a language called Umbrian which was similar to Latin. Little is known about the Umbri till this day, but they had a definite presence in the region. The Umbri eventually shared the region with the early Etruscans. Relations between the Umbri and the Etruscans were strained and often resulted in battle over control of the region. It was the inevitable introduction of the Romans which prompted the two peoples to join forces against their new invaders.

Like many peoples, they were defeated by the Roman Empire, and after its fall the region of Umbria was victim to many traveling bands of invaders such as the Byzantine, Goths, and Longobards. Umbria was highly priced for its central location between both sea coasts and the north and south of the peninsula making its strategic location a prime target of assault by invaders seeking to dominate the area. Regardless of the strife inherent in the area Umbria continued to prosper artistically, intellectually, and economically. Umbria is home to some of Italy’s most fascinating archeological remains as well as works by many of the Renaissance’s most famous artisans.

The Umbrian economy is stable. Based mostly on agriculture and tourism the region has shown significant growth over the last couple years and a reduction in the unemployment rate. Industries surrounding tourism, such as hotels, restaurants, transportation, retail and real estate are steadily growing. Such industries are growing faster than any other in the region. Manufacturing industries, especially those surrounding the production and manipulation of metal, textiles, wood, pottery, ceramics, and chemicals are also expanding. Agriculture, which once provided the staple to the Umbrian economy, is suffering a decrease in the number of jobs it provides due to improvements in production technologies which have allowed for greater production with fewer workers. Chief agricultural products of Umbria include tobacco, wheat, sugar beets, potatoes, and truffles.

Umbria is the leading producer of truffles in Italy. Coincidentally, it also has a growing swine industry and produces many of Italy’s famous pork and salami products. Overall, developments in communication technologies and better production techniques in the field of agriculture have lead to increased economic growth in the area. Tourism continues to expand as people discover the inherent beauty of the region, but is slightly hindered due to a lack of sufficient railways, road networks, and hotels to accommodate the boom. Despite this, tourism provides the bulk of the regions finances.

Umbria is another one of Italy’s “unspoiled” regions. It is often referred to as the “Green Heart of Italy” due to its beautiful woodlands and rolling hills. It truly looks like a post card perfect world. Umbria is one of the only landlocked regions in Italy. It is bordered by Marches, Latium, and Tuscany. Umbria has the fourth lowest population of the twenty Italian regions at about 826,000 persons. The area covers roughly 85,000 Sqm and is divided into two provinces: Perugia and Terni. The regional capital is Perugia. The region is mostly comprised of gentle rolling hills and beautiful woodlands.

Approximately 40% of Umbria is covered in beautiful woodland area. Stands of olives grow sporadically across the region and beautiful villas dot the country side. Small villages and romantic medieval castles capture the hearts of visitors. Numerous small rivers and streams flow through the picturesque region. The bubbling springs of Clitunno, which are formed by the waters of the river Topino are a popular tourist destination. Also popular are the Marmore Falls where tourists come for the beneficial mineral waters that cascade gloriously down the mountain side.

While the beautiful countryside does a great deal to draw tourists to Umbria, it is its art and history that captures the imaginations of people from distant lands. Umbria is the host to many wonderful artistic and historical relics. Beautiful examples of medieval and Renaissance art can be found in nearly every small town. Wonderful frescos such as those in the famous St. Francis basilica are well preserved and lovingly adored by the people of the region. Churches, governmental buildings, and theatres from the Roman Empire to the High Renaissance still stand virtually unchanged by time as a testament to the artistic and scientific achievements of man. Tourist may also enjoy a visit to any number of ceramic, pottery, and artisan studios in the region for a glimpse of old world hand crafting techniques still in use today. Umbria is also home to many museums and cultural centers that cater to the educational interests of visitors.

When Traveling in Umbria it is best to park vehicles outside of the towns as the road ways are not well adapted to vehicle traffic. The scenic walk will be well worth avoiding traffic on small streets. While in Umbria, a visit to the Orvieto Underground is almost necessary. This natural fortress was founded by the Etruscans and so far over a thousand underground rooms and room complexes have been discovered. Tourist can only visit a few of these rooms because of safety concerns, but the effect is still quite impressive.

Etruscan art lines many of the walls and tourists can see first hand where ancient olive oil production took place. Umbria is the perfect place for tourists to not only enjoy the art, history, and culture of Italy, but to avoid hordes of visitors as well. Small family owned restaurants and wonderful outdoor markets provide visitors with all the dietary and shopping needs while local events and wonderful relics keep visitors entertained. If possible visit one of the many festivals and pageants held in Umbria such as:

Umbria is a modest region with intense ties to its cultural past. It is scenic and beautiful. Visiting Umbria is like seeing history first hand and experiencing the world as it was centuries ago. There is no better place to enjoy the romanticism of the past with the conveniences of the future while avoiding the chaos of bustling cities. From misting waterfalls and medieval castles, to ancient ruins and glorious architecture, to religious relicts and stunning artworks, from olive groves and fine wine: Umbria has everything Italian.

Umbriaturismo.net: the tourism portal dedicated to Umbria. Events, festival, trips and much more to enjoy the best of Umbria.

The summer Umbria Jazz Festival is held annually in Perugia every July, and I have also attended the Euro Chocolate Festival which is held in October annually.