A few Reminders to Keep your Cool

During January and July every year, “Saldi” is the talk of the town in big cities and little villages alike. It is time for the sales in Italy! It is customary for stores to begin selling their merchandise at 30% off beginning in the 2nd week of January and July. The sale will last until the inventory is gone and the discount tends to increase upwards to 50% as the weeks go on. When asked, shop girls will tell you that the inventory will last until the end of February, but by that time, expect slim pickings. 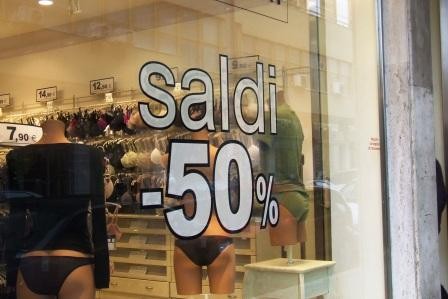 The luxury stores on Via Condotti in Rome or Via de Tornabuoni in Florence are also offering generous discounts on their clothing and accessories. Department stores and boutiques are not shy about advertising, as proven by the ten foot signs in the window you can read a mile down the road. Designer shops, on the other hand, are much more discreet. They consider it vulgar to announce to the world that they are offering a discount.

It is nearly impossible to find something fabulous at a designer boutique during the sales for several reasons. First, the designer stores usually offer a private, invitation only sale for corporate employees and frequent clientele before the goods are available to the public. Don’t be fooled into believing that the private designer sales are dignified events. Lose your mental image of posh girls exchanging double cheek kisses and sashaying around clothing racks with champagne. They tend to be outright catfights to get the goods at dirt bottom prices. Second, what is left at the end of the season has most often been rejected due to it’s ill fit, odd color, or extreme style.

Third, the sales include clothes worn by the mannequins or returned from a capricious customer. Finally, designer boutiques have their own outlets, which is where a great deal of their discounted apparel ends up to save them from the embarrassment of publicizing a sale. Outlets tend to be the best place to find frocks and accessories in decent condition from past seasons.

Now please remember that a considerable discount in clothing should never reduce you to behave in a way that you would be embarrassed to under ordinary circumstances. For some reason, it always does. Customers strip down to their bras and skivvies and strut around the store as if they are in their bedroom to avoid the lines at the dressing room. If you’re known for baring it all, you might want to save your g-string for another day.

Rules to play by:

1. Check very carefully that it is not stained, soiled, missing buttons, or defective in any way when purchasing. You never know the life of the particular piece of clothing and it’s important to inspect it with the utmost scrutiny. After all, stores don’t always allow returns on sale merchandise.

2. Make sure it fits. Nothing can bring down an outfit faster than a poorly fitted piece of clothing. Try it on and do the fit test: walk, sit, twist and dance around to be sure that you can move freely.

3. Play nice and keep your hands to yourself. Maybe you are in fact one of those girls who gets a bit out of hand during sale time. Albeit an embarrassing trait to possess, it’s understandable. Try this mental exercise next time you feel the urge to rip the last pair of size 7 Gucci sandals from another customer’s hands. Just imagine the other shopper to be your grandmother. Now you wouldn’t do that to old Grammy, would you?

4. Never buy anything you wouldn’t want at full price. Many women are easily swayed by the price tag or designer label during a sale. Don’t let the excitement and anxiety of the crowds get to you. Keep a clear head and remain calm. Stay true to your style.