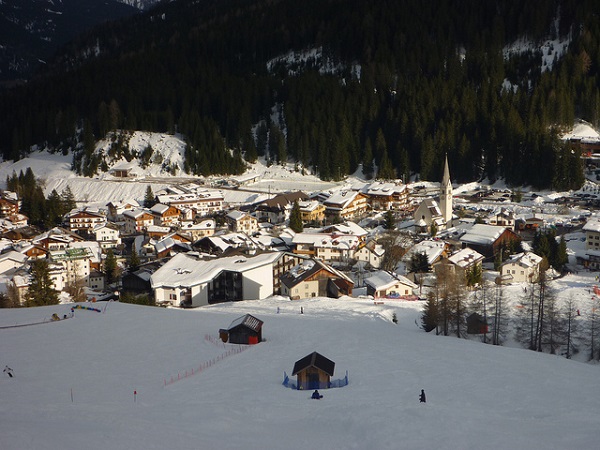 Arabba was already one of Italy’s most popular resorts, but surely got some help when it joined the ski area known as The Sella Ronda. It’s an historical village, but with all the modern facilities of a purpose-built resort.

The Arabba ski resort is located at the base of Sella Massif, at the foot of Pordoi and Campolongo passes, in the very heart of the  Dolomiti SuperSki skiing compound. It boasts 1,040 kilometers of ski trails and 465 lifts. It’s also one of the highest resorts in the Dolomites. The most practical way to reach the resort is to fly to Venice-Marco Polo Airport and take a train to Belluno.

The village of Arabba

Arabba is a small hamlet of Livinallongo del Col di Lana, in the Belluno province of Veneto. At about 5250 ft of altitude, Arabba is one of the highest municipalities in Italy and has a population of only 275.  Located near the passes of Pordoi  and of Campolongo, it is near the border with Trentino Alto-Adige.

The origins of the Arabba settlement are shrouded in mystery, as no information is available up to when the village church was built, in the 17th century. However, local legends tell a story of disastrous calamities befalling the area and having brought, in the past, to a massive depopulation of the place we know today as Arabba.  Proof of the veracity of these tales may lie in the village’s name itself, which may come from the dialectal word roiba, meaning landslide, or even rebia, avalanche. The presence, near the village, of an older church called Chiesa Vecchia (literally, the old church), may point at the fact that was the location of the original settlement.

Today Arabba has become one of the best known and renowned tourist locations in the Dolomites, as it is part of the popular Dolomiti Superski compound. It is also a lovely Summer destination, because of the beauty of the surrounding mountains (the Sella Massif) and the passes of Pordoi, Campolongo and  Falzarego.  It is a beautiful starting point for plenty of treks and walks.

About 25 percent of the ski runs at Arabba are geared towards beginners, 55 per cent to intermediates and 20 per cent to advanced or expert skiers. Arabba’s slopes are divided into three distinct areas: the one directly above the village, on the slopes below the Porta Vescovo; the lifts linking up to the Passo Pordoi and Canazei, and finally the links linking up to the Passo Campolongo and Corvara Skiing. It is perfect if you are a beginner, as its nursery slopes are among the best in the Dolomiti Superski compound.

Arabba brings you the sight of wonderful giant mountain formations and the experience of spectacular excursions as well as the type of ski runs you’ve dreamed about. Like the legendary Sellaronda or a day trip on the 3,342 meter high Marmolada, widely considered the ‘queen of the Dolomites’.

Apart from skiing, Arabba offers many more possibilities for your entertainment. There’s the Ice Stadium, snow mobiles, beautiful excursions on snowshoes and ski poles, mountain huts, restaurants, pizzerias, bars and discos.The resort area that makes up Arabba is actually a small village that has an excellent range of accommodations to offer, from comfortable self catering, to your own private chalet through to extremely comfortable 4 star hotels with a host of facilities to ensure you’re relaxed, looked after and full of energy for the next round of skiing. Some of the best places to stay are the Hotel Alpen Rose, the Hotel Al Forte and the 4 star Hotel Grifone, located nearby, on the passo di Campolongo.

Almost all hotels in Arabba have renowned restaurants, open to all. Among them, the restaurant of the hotel Al Forte,  above mentioned, is well known for being one of the best. If you’re after a nice pizzeria, check out the Al Tablé, which also offers traditional Alpine dishes. The Hotel Mesdì has a wonderful restaurant, too.

Arabba is a small place, so don’t expect to find a mall here. However, the village is lively with tourists and it’s a hub of Ladin culture. The Ladin language is atraditional idiom spoken in some valleys of Veneto and Trentino Alto-Adige, and Arabba is at the very heart of the area. Traditional handcrafts are easy to find in local shops, just as wholesome cheeses, salumi and preserves. Bakeries are great, and offer plenty of selection for a quick snack before getting on the slopes.