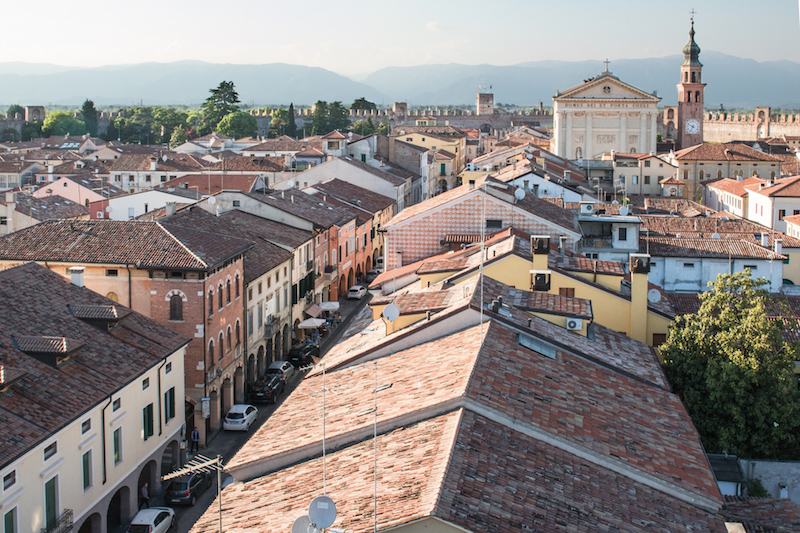 Cittadella is a small town in the Padua province of Veneto. With its just over 20.000 inhabitants, and the overwhelming presence, just a stone-throw away, of places like Padua itself, Treviso and Vicenza, it’s no wonder that, in the end, not many know about the place. But what a mistake: because Cittadella is without a doubt at the heart of Veneto’s own medieval heritage and architecture.

Its medieval imprinting still very much visible around every corner, Cittadella is an amazing architectural time capsule, a beautifully preserved real life still of times long passed and their history.

A bit of the history of Cittadella

Cittadella was founded in 1220 when the town of Padua decided to reinforce its territory’s defences against Treviso and Venice by building a fortified enclosure in the middle of the Veneto plain. Cittadella wasn’t, of course, the only one in the region: Bassano del Grappa, Marostica, Asolo, and Castelfranco Veneto are other notable examples.

Archaeological findings teach us the area was inhabited since Roman times: 148 BC they built the Postumia, a road joining Genoa to Aquileia, turning it into a busy commercial junction. After the fall of the Roman Empire, the whole region passed under Lombard dominion, but it’s likely it lost its relevance and population, returning to a state of wilderness.

We need to fast forward to the 11th and 12th century to see the area flourishing again. The Repubblica Comunale Padovana had embraced aggressive expansionistic politics, which placed it often against other leading political entities like the already mentioned cities of Treviso and Vicenza. The area around the Brenta river, where their land possessions met, turned into a potential battle zone: thus the construction of Cittadella.

Shortly after being founded, Cittadella suffered the domination of Ezzelino III da Romano, a local landlord known for his cruelty. In fact, one of the town’s most recognizable landmarks, the Torre di Malta, was built under his supervision, to become a dreadful prison for his personal enemies.

In the 14th and 15th centuries, Cittadella returns under the patronage of Padua with the Carraresi family and then, in 1406, it becomes part of the Republic of Venice, along with all of Veneto. After the fall of the Republic at the hand of Napoleon (we are in 1797), Cittadella is shortly ruled by the French, then becomes Austrian in 1815, after the Congress of Vienna. In 1866, it becomes part of Italy. 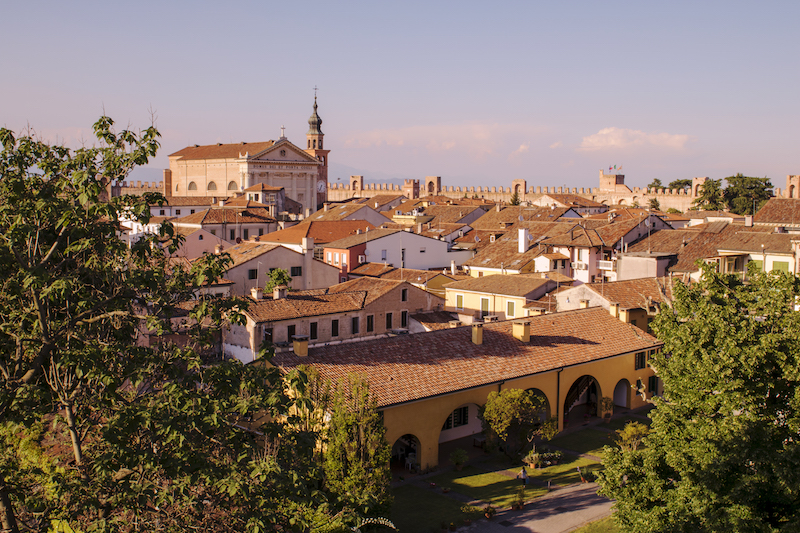 Cittadella and its majestic walls

An interesting history, that of Cittadella, that follows closely our nation’s own political instability and changes throughout the centuries. A history whose vestiges remain the town’s real attraction. Conceived and born as a walled, fortified town, Cittadella’s majestic walls are certainly the most amazing among all of its architectural wonders.

They are a rare example of fully preserved mural fortification, which is still entirely visitable. It is, in fact, one of the most beautiful and complete defensive systems still extant in the whole of Europe.

The town walls run along a 1461 metres perimeter, enclosing the urban conglomeration entirely, today as 800 years ago. With a thickness of more than 2 metres, it comes as no suprise, of course, to know they are fully walkable, just as those of Lucca. Their average height is of 14 metres, even though defensive towers reach 30 metres; there’s 36 of them, all along the length of the walls, all of variable heights and shapes.

The whole defensive system has been recently restored and it is, as mentioned, entirely walkable: this gives visitors the opportunity to appreciate the town centre of Cittadella from an advantageous point of view, one that allows to notice the regularly perpendicular structure of its streets, as well as the central, cross-shaped presence of its two main roads, joining opposite gates to one another. Each of the gates is oriented towards a different town: Padua to the South, Bassano del Grappa to the North, Vicenza to the West and Treviso to the East.

The presence, still today, of a moat around the wall complex gives it an even more medieval feel. The moat, filled with spring waters, used to be twice as deep and twice as large during the Middle Ages and the Renaissance, so much so it was considered an excellent source of fish for the town’s population. 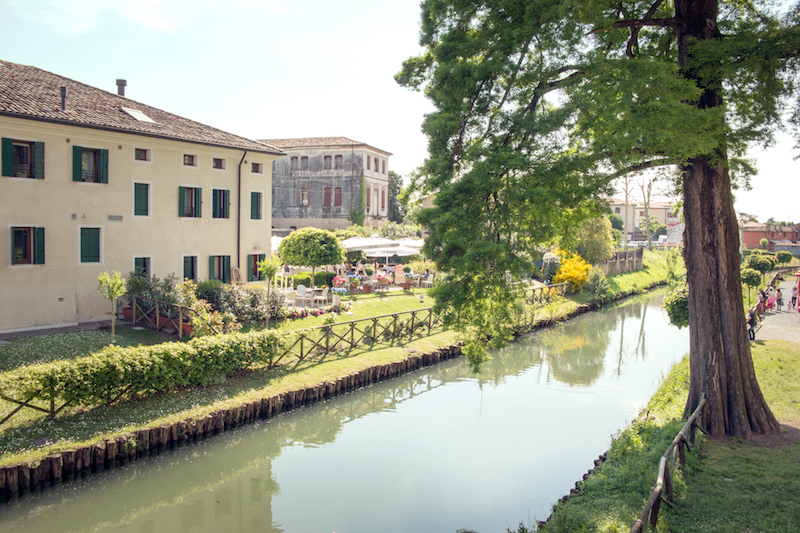 Within the walls: more beauty to be discovered

The building dates back to the 15th century and it owes its name to the large portico opening up on its ground floor. It underwent thorough restoration in 1816, this is why it presents, today, an evidently neo-classical look. However, some vestiges of its older appearance are still visible: notable is the freeze running along the walls of the portico, which includes Venetian podestà’s coats of arms and also the symbol itself of La Serenissima, the Saint Marc Lion, removed by the people of Cittadella during Napoleonic dominance and hidden within one of the palace walls. It was brought back to light only in recent years.

The Duomo, its museum and picture gallery

Erected between 1774 and 1826, the Duomo is known also for the interesting paintings kept in its sagresty. Here pieces such as Jacopo da Ponte’s “Cena di Emmaus,” Andrea da Murano’s “Lamento sul Corpo di Cristo” and Palma il Giovane’s “Flagellazione” can be admired. Through a small shop on the ground floor of the Duomo’s belfry, visitors can access a sacred art museum, home to an incredible collection of religious objects and clothing of all historical periods. The Duomo itself, along with these two museums, is a must for art lovers.

We mentioned the Torre di Malta, reminder of the dominance on Cittadella of unstable and wicked Ezzelino III da Romano. The fortress became infamous in the area for the alleged tortures that here took place, to the point it’s even mentioned by Dante in the Divina Commedia. Within the tower, which is a sturdy example of 13th century architecture, is the Museo Civico Archeologico, home to several findings related to the Cittadella territory, from the Bronze Age to the Renaissance.

Cittadella, lesser known pearl of Veneto, is a beautiful shrine to medieval art, architecture and history. Its unequalled state of preservation makes it a perfect destination for all those interested in the history and arts of those times and for whomever loves the idea of spending a few hours immersed in the heady atmosphere of times long gone. 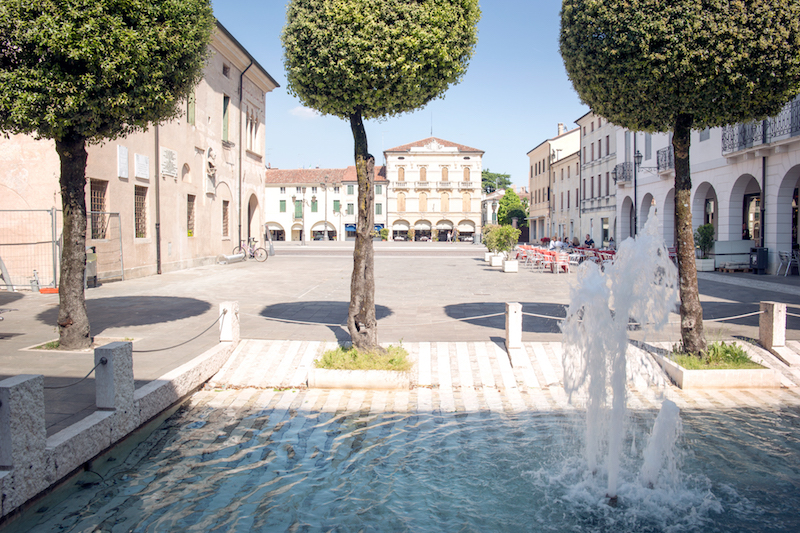