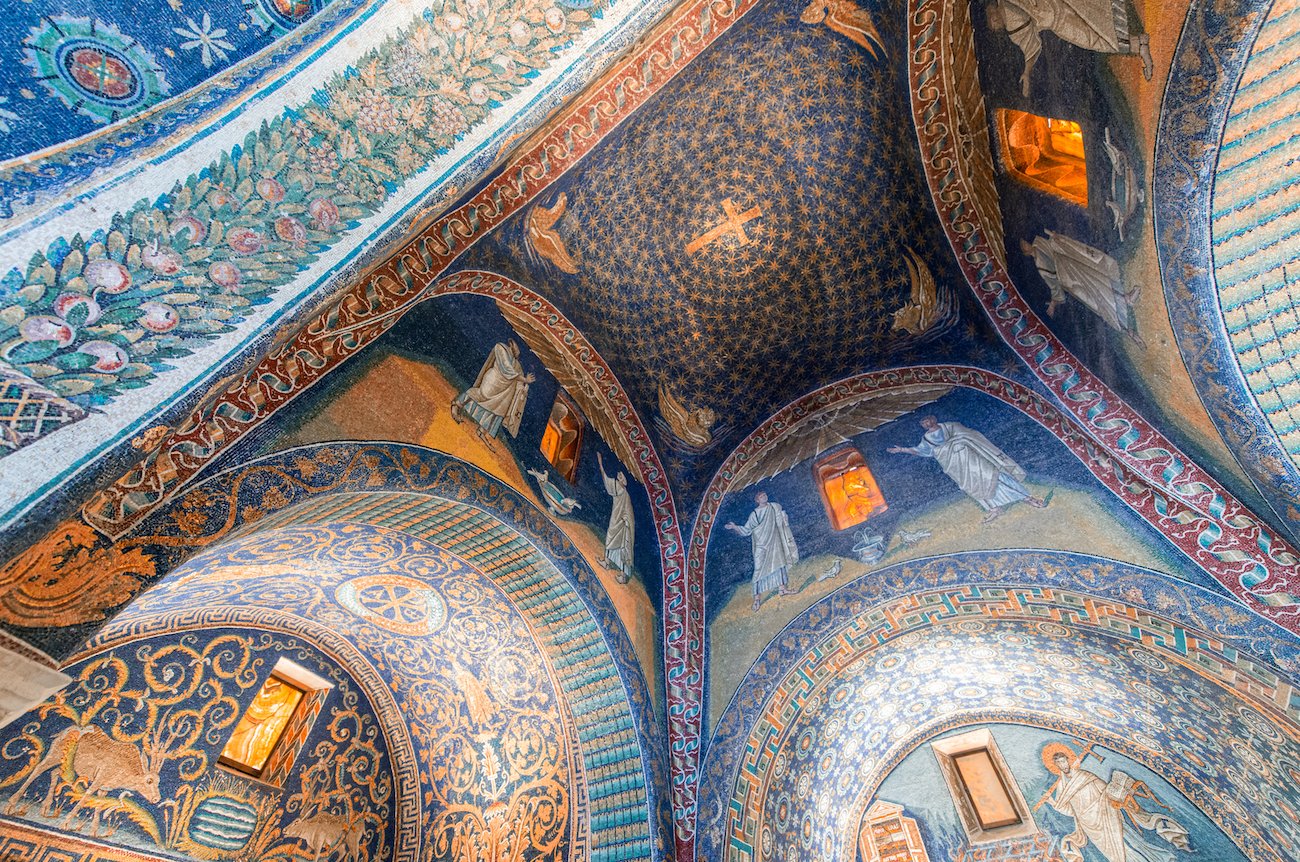 Ravenna is an ancient city that inspired Oscar Wilde and was once the home of Byron. Anyone who visits the city will be swept away by the romance and history that it holds. The main seat of the Roman Empire during the 5th century, and then again during the Byzantine era in the 8th century, the city has a beautiful collection of monuments and examples of Christian art that draw thousands of visitors every year. Eight buildings in Ravenna were constructed during the 5th and 6th centuries. Famous for their blend of Western and Asian styles, as well as the artistic skill displayed in their construction, the buildings were added to UNESCO’s World Heritage Site list in 1996.

The Baptistery of Neon

The Baptistry of Neon, or the Orthodox Baptistery, is the oldest remaining monument in Ravenna and was constructed on the site of a Roman bath. The building has an octagonal shape, a symbol of the seven days of the week and the additional Day of the Resurrection, and was erected at the end of the 4th century by Bishop Ursus as part of the great basilica. The construction of the baptistery was later completed by Bishop Neon and it was at this time that its marvelous mosaics were added. The proper structure of the building can no longer be seen as the original floor of the building is now three meters underground. The mosaics on the ceiling of the building shows John the Baptist baptizing Jesus in the Jordan River and also depicts a procession of the apostles, which ends with Saint Paul meeting Saint Peter.

The Mausoleum of Galla Placidia

The Mausoleum of Galla Placidia is a Roman mausoleum that features beautiful, well-preserved mosaics in Ravenna. The building is designed in a Greek Cross plan with barrel vaults on the four transepts and a central dome on pendentives. Outside, the dome is enclosed by a square tower that rises above the gabled lateral wings and the entire structure has been covered with blind arcades and mortar joints.

The Arian Baptistery was constructed on the orders of Theodoric the Great, the Ostrogothic King at the end of the 6th century. After the condemnation of the Arian cult in 565 this small structure was converted to a Catholic oratory and was named Santa Maria. A monastery was later added to the church by the orthodox monks who dedicated it to Saint Maria in Cosmedin.

The building is also octagonal in shape and inside four different niches can be seen along with a dome decorated with dazzling mosaics that show the baptism of Jesus. During World War II bombing cleared buildings around the structure allowing researchers to discover exterior details for the first time.

Visitors to the Bishop’s Palace in Ravenna will find the Archiepiscopal Chapel located on the first floor of the structure. Built by Peter II in 495 after he became archbishop the chapel became a private oratory for the Trinitarian bishops in the 6th century.

The chapel, now dedicated to Saint Andrew, was originally dedicated to Jesus as shown in a lunette that depicts the Savior as a victorious warrior. The lower parts of the walls have been covered with marble slabs and some of the original mosaics remain. In the 16th century parts of the walls were decorated with the paintings of Luca Longhi.

The Basilica of Sant’Apollinare Nuovo

The Basilica of Sant’Apollinare Nuovo was erected by Theodoric, the Ostrogoth King. The Basilica was built as his personal palace chapel at the beginning of the 6th century and was originally dedicated to Christ the Redeemer.

The Basilica was reconsecrated in 561 as Sanctus Martinus in Coelo Aureo during the rule of Justinian I, the Byzantine King. It is believed that Pope Gregory the Great ordered the church’s mosaics blackened so as not to distract the worshippers. In 856 the basilica was again renamed when the remains of Saint Apollinare were transferred to the Basilica from Sant’Apollinare in Classe.

Several other sites in Ravenna, including the Mausoleum of Theodoric and the church of San Vitale, are worth visiting for their beautiful mosaics and historical importance as early Christian monuments. A city rich in history and culture Ravenna is certainly not to be missed.