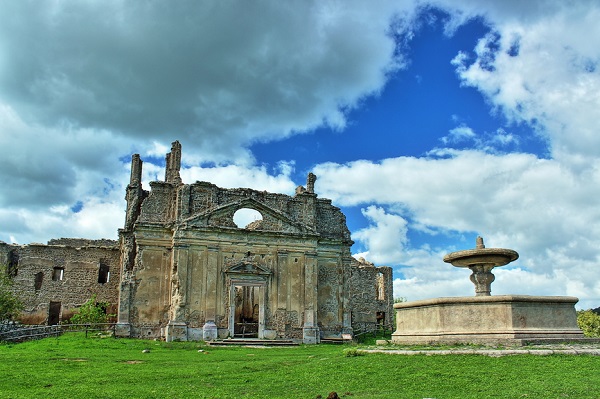 In the center of the boot, name with which Italy is usually referred to, there are several forgotten and hidden ghost places that can be visited by everyone interested in mystery…

Starting from the first – or last, depending on which side of Italy you are coming from – western region of the center of the country, Lazio is famous for Rome and her monuments, which do not lack in mystery. Nevertheless, there are several interesting places outside the capital  that can be discovered during a short trip. Here is a list of some places deserving a visit…

It is situated on the mountains of Tolfa, north of Rome. The place was founded in the 9th century, destroyed by barbarian invasions and rebuilt by the inhabitants of Tolfa Vecchia (Old Tolfa) in 1240, hence the name Tolfa Nuova (New Tolfa). In the 15th century its destruction was ordered. According to legend, this was due to the presence of silver, gold and precious minerals in Tolfa’s underground, which caused a gold rush and several disputes among the inhabitants. Today, it is possible to see the stones of the ancient borgo spread all over the woods, the ruins of the castle, the church and the walls. Tolfa Vecchia is still there.

The town of Ninfa is situated in the southern part of the region, in the area of Cisterna di Latina. It is known for its gardens and the river that divides them. In the past, noble families and popes used to visit and spend time in this natural reserve. Actually, this green oasis was born around a little Roman temple built in honor of the Ninfe Naiadi, divinities of rising waters. Despite several extensions, the town was eventually abandoned as the area was hit by malaria and survivors moved to Rome and its surroundings, turning Ninfa into a ghost town. At the end of 1800s, the Caetani family reclaimed the area and planted trees and many species of plants. Today, Ninfa’s ruins are still visible among the woods of the park.

Situated in the area of Canale Monterano, it was a very active center during the Middle Ages, often visited by Popes. It was abandoned in the 1700s because of a sack by the French army. In spite of being a ghost town, Monterano is kept in tip-top conditions. The town is easily reachable from Rome.

One of the most famous ghost towns of Italy is in the province of Lucca: Fabbriche di Careggine is an exceptional place, especially because… it is invisible…

This is a place rich in mystery. Located in Garfagnana, an area in fact renowned for its ties with the occult, Fabbriche di Careggine is a real ghost town, because it cannot be visited: it is actually submerged under an artificial lake.  The village was born thanks to some blacksmiths coming from northern Italy. Starting from the 1800s, the place began to lose its importance from an economic perspective, but in the 1900s the trade of marble made it rise again. However, the construction of a hydroelectric plant marked its sunset, as little by little water flooded the village.

This ghost place was made visible again when the lake was dried out due to some works to the dam. In 1958, 1974, 1983 and 1994 people had the opportunity to see this ancient center coming out of waters. If you want to visit, you should make it to Italy next year, in 2016, as the lake is due to be emptied for maintainance works then. If you want to read more about Fabbriche di Careggine and other spooky underwater locations, you should check our article on Italy underwater.

In province of Pisa, you will find the ancient borgo of Toiano. It is incredibly small, emphasizing the idea that time stopped and life used to turn around the castle, which can still be seen together with a deconsecrated church. On the hills of Siena, Poggio Santa Cecilia boasts an ancient castle, too. Dante used to go to this borgo which still keeps a castle and a church: the whole town has been abandoned for some decades.

There are several ghost places in this region; it is possible to find some near Teramo, but the most famous ghost town in Abruzzo is Sperone, near L’Aquila. There used to be a Roman praesidium and the name of this place is linked to two castles which were joined. It was damaged after an earthquake and then abandoned. In the course of time, it was revitalized, but today it is uninhabited.

The ghost places mentioned are only a small selection but there are still many others to discover. Abandoned without traces of man’s presence, it is exactly this that makes it worth visiting them. If you  are interested in the topic and like spooks, you should check our our articles of ghost towns of the North and ghost towns of South, too!