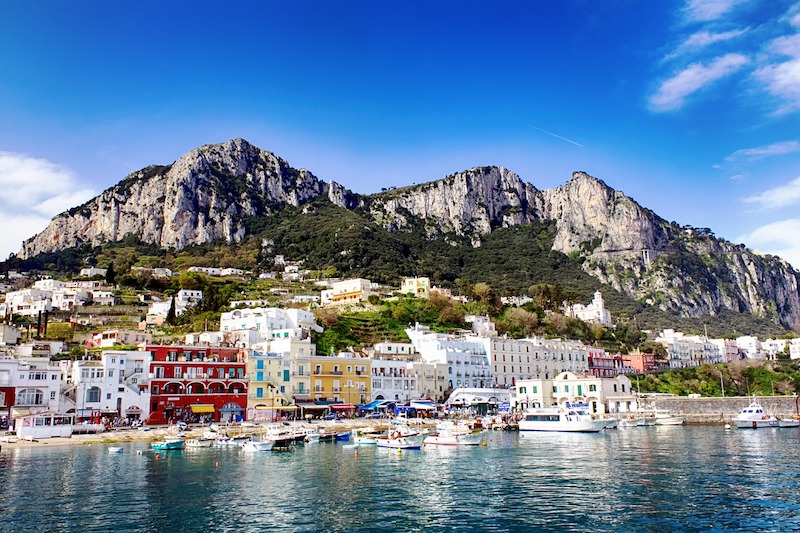 Where does Jennifer Lopez go for an Italian getaway? Why, Capri, of course!

“Open my heart, and you will see Graved inside of it, Italy.” – Lord Byron

How many times have you heard the phrase, “It’s Better in the Bahamas?” Or “Virginia is for Lovers?”

Okay, I admit the Bahamas is glorious, and Virginia has its pleasures. But for me, unquestionably, if there’s anyplace that’s “for lovers,” Italy is it.

Picture your own dream holiday: in Capri, the fave of La Lopez; or at the legendary Lago di Como, described by Shelley as ‘exceeds anything I ever beheld in beauty’; or in a charming villa in Amalfi. Does it get more romantic?

How about a wedding in a baroque cathedral high over the bay overlooking Positano, with dramatic views to the sea; or at a 14th century castle outside Florence, with moats and turrets, and olive groves nearby? An exquisite honeymoon week in Lago Maggiore and Tuscany would be more than memorable; or perhaps a winter honeymoon in Venice with a ski trip to the Dolomiti?

I myself have witnessed two weddings in Italy, as the following excerpts from my novel, Travels With My Lovers, will attest: one, in the charming cathedral of the rustic hilltown of San Gimignano…

“It was small and intimately appealing and seemed to exist in a vacuum of old world traditional charm, meriting without doubt its nickname of “the best medieval town in Tuscany.” It was, in fact, so small that (we) were able to walk from one end to the other in about forty minutes, stopping to appreciate the beauty of the venerable, aged buildings and unspoiled nature of the atmosphere. At the main square was an ancient cathedral perched at the top of a long cascade of stairs, where a festive wedding celebration was taking place.
I watched, enthralled, as the bride, clad in an exquisite, very expensive-looking silk gown with a graceful wide skirt, reveled in her special moments. The entire wedding party was extremely well dressed, I thought, especially for a little hill town. I found this gathering of well-heeled celebrants in this tiny, unpretentious hamlet somewhat impressive.”

The other, in the hills high above Florence…

“Having at last reached Florence, I avoided the center of the city… and drove up the Viale dei Colli to the Piazzale Michelangelo, high above the town. There I happened upon another wedding. This one, in contrast to the one we’d seen in San Gimignano, was of a more sophisticated nature, with a wedding party that appeared even more well-heeled. The members all looked as if they had been dressed by Armani or Versace, especially the bride, whose svelte, magnificently tailored garment was the antithesis of the voluminous, sentimentally traditional design of the other, younger bride’s gown .

“As I watched the celebration and reveled in the panoramas of Florence from my perch on high, I contemplated with renewed understanding the reasons why these views had inspired artists for centuries. The burnished beams of gleaming sun reflecting from the 12th century mosaic on the facade of the Church of San Miniato al Monte; the reproduction of Michelangelo’s David, with its siblings, the Medici statues, surrounding it; the incomparable breathtaking view of Florence below, bisected by the supple waters of the Arno: all of these stood as ravishing proof of Fiorenza’s unique artistic loveliness .”

No wonder so many romantic films take place in Italy. From the three young girls in Three Coins in a Fountain, to the ingenuous Audrey Hepburn in Roman Holiday, to the ever-captivating Katharine Hepburn as the more mature woman in Summertime, Hollywood has gleaned endless romantic inspiration from this Land of Lovers. And on a more contemporary note, who could forget the incomparable Diane Lane in Under The Tuscan Sun?

Need I say there is a dazzling array of romantic scenes in my novel, Travels With My Lovers? You’d like to read some of them, you say? Well, then, Signori, prego…

“This particular cool evening, Carlo drove along the Arno, up and down on both sides, pointing out the ancient villas and antique churches that dotted the riverside. The views were awe-inspiring and reaffirmed my opinion that Florence was a truly unique city, its streets, architecture and monuments a testament to the legacy of Dante and other spirits of old who seemed to still populate their former haunt…

“Again we climbed into the hills of Fiesole, this time from the opposite direction: up the magnificent, tree-lined Viale dei Colli and into the Piazzale Michelangelo, with its simulated statues of the sculptor’s works and its stunning panorama of Florence stretched out below. We strolled in the crowded, festive atmosphere of the piazza…

“…With his free arm, Carlo suddenly pulled me close to him and brushed his lips against my neck. I felt immensely turned on by the searing flash of hot energy that pulsed from my head to my toes …”

And who wouldn’t be, with such an atmosphere? It’s all about the driving force that inspires lovers in the land of romance: love on a train hurtling through the tunnel under the Italian Alps; love “under the influence” of the sensuous-smooth Chianti in a Tuscan taverna; love in a sequestered, functioning cloister in Toscana. The possibilities are endless. And just as the protagonist in the novel found romantic inspiration within the frontiers of in Bell’Italia, I’m sure you will discover your own sources for your own romantic journey. So go for it. Your only limit is the boundaries of human imagination.

Intrigued by the above excerpts? Email me at: emwriter@earthlink.net, and I can arrange to send an autographed copy of Travels With My Lovers to you – al piu presto possibile.

Next: A Music Lover’s Paradise

Former Metropolitan Opera violinist Erica Miner turned to writing as her creative muse when injuries suffered in a car accident forced her to give up her musical career. She has won awards for her screenplays, novels and poetry, including the Fiction Prize in the Direct From The Author Book Awards for her novel, Travels With My Lovers. Erica has made a name for herself through book signings, interviews and speaking engagements and has been named a ‘top-rated’ lecturer for Celebrity Cruise Lines.

For more information about Miner and her upcoming projects, log onto ericaminer.com.