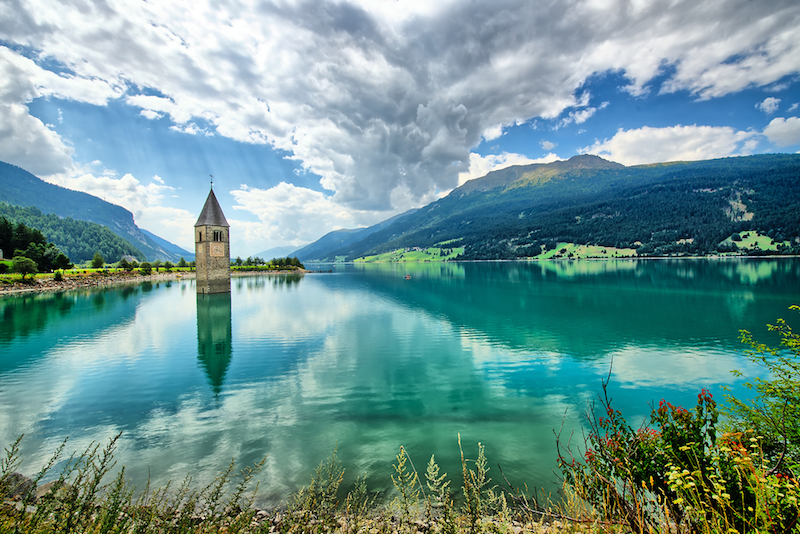 Italy is a beautiful country and all that’s above her soil is demonstration of it.

There’s also plenty of natural beauty under her sea, the Mediterranean having some of the most amazing marine flora and fauna in the world. Have you ever thought, though, about cities under water or entire Roman ports? Have you ever thought about abandoned villages, submerged by the green, cold waters of Alpine lakes? Well, Italy has some of those, too.

Mystery, history, progress… all played a part in the final dénouement of these places’ existence. Here are their stories.

There is quite a number of places in Italy which have disappeared completely from the maps and are today only a distant memory in the minds of local communities. What do these villages have in common? The reason they no longer exist: dams. When progress chose their valleys as perfect locations for modern dams, their existence came to an end under metres and metres of water. Some remember these places because they were born here, and spent parts of their existence roaming their streets; others – the majority today – have witnessed the haunting beauty of their ruins when, usually every ten to twenty years, the water basins under which they are buried get emptied for maintenance. If you’re around the area, ask about them: it doesn’t happen often to see a village emerging from waters, almost intact.

Fabbriche di Careggine is probably the most famous of all Italian’s underwater villages and is located in the beautiful Garfagnana, in the Lucca province. If it still existed today, it would be under the jurisdiction of Vagli di Sotto, a small village of around 1000, overlooking the lake of Vagli. Point is, if Fabbriche di Careggine was still here, there wouldn’t be any lake: il lago di Vagli is not natural, but has been created artificially in 1946 as a hydro-electric basin to support the whole valley. The people of Fabbriche di Careggine were moved to a new village, Vagli Sotto, on the banks of the lake.

Fabbriche di Careggine sees the light of life usually every ten years, when the basin is emptied for regular maintanance works. Vagli Sotto’s mayor has announced in June 2015 that this will happen during the Summer of 2016, 12 years after it had happened the last time. If you’re in the province of Lucca this time next year, you may be able to witness something extremely unique and truly haunting.

Fabbriche di Careggine’s sad fate has helped the birth of many a legend: the most popular says that, on full moon’s night, Fabbriche’s church bell tolls in pain for the tragic destiny of the village. Another tale talks about Teodora, a haughty and somehow evil woman of Fabbriche. After her husband’s death, she showed no sorrow, demonstrating to have an arid soul and no compassion. When the village was about to be submerged, she refused to believe it was going to happen and died in her home, drawned. Once again, it’s the church bell to tell us about her, on the night between the 13th and the 14th of December (the night of her husband’s death), when a death knell can be heard in memory of Teodora’s wicked ways and her husband’s death.

The destiny of small Alto Adige village Curon Venosta (province of Bolzano) was similar to that of Fabbriche di Careggine. In 1950, two of three large Alpine lakes by the Pass of Resia were unified through the construction of a large dam. Because of it, the old village of Curon Venosta was entirely submerged and reconstructed higher up on the mountain: 163 homes where covered by water, along with the many fruit orchards that used to give work and sustainement to their inhabitants.

Contrarily to what happens at Fabbriche, Curon Venosta never sees the light of the sun and has kept its silent, under water sleep since the 50s. However, you can see some of old Curon Venosta every time you want: the bell tower of its old church, now underwater, rises from the quiet surface of the lake and can even be reached by foot during the Winter, when the lake freezes and you can walk upon it.

The “new” Cunor Venosta and Resia are, today, a popular holiday destination, both in Summer and Winter.

Osiglia is today a small quaint village of about 500, on the shores of the homonymous lake in Val Bormida (Savona). But just as it happens with Curon Venosta, modern Osiglia hides something under the quiet waters of its lake: its older self. Old Osiglia was a small medieval village, abandoned in 1937 to allow for the construction of a dam and the consequent creation of an artificial basin. Every ten years, the lake is drained to maintain the dam and old Osiglia is visible to all: a little stream still runs beside the ruins, among which a church and even shops can still be recognized.

The Osiglia lake has been drained in 2006 and, if all goes to plan, it should be emptied once more in 2016. Then, its older inhabitant should be once more visible to us all.

Madonnuccia is a small borough of the larger village of Pieve Santo Stefano, in the Arezzo province, in Tuscany. What strikes about this place today is the beautiful view one can get upon the Lake of Montedoglio, an artificial basin in the high Valley of the Tiber. Underneath the deep green waters of the lake, lies a secret: the old Madonnuccia. In a story similar to those of the villages we’ve already visited, Madonnuccia, too, is a victim of progress and was submerged when works for the artificial basin were concluded.

Because Madonnuccia was obliterated by the waters only in 1980, plenty of people have still vivid memories of it: some of them have been collected in a touching and interesting documentary, Il Paese Sommerso, which we repropose below.

It is not all about progress and abandonment. Sometimes, water also protects symbols of faith, such as the one we’ll discover below.

The bronze Cristo degli Abissi, or Christ of the Abyss, as you’d say in English, is not unique to the San Fruttuoso bay, in Liguria, however, the Italian statue was the one inspiring all the others. Copies of it are underneath the waters of Florida, at St George’s port (Grenada) and in the Lake Palù, il Val Malenco (Lombardia).

The idea of placing a statue of Christ underwater came to the mind of Duilio Marcante, seminal figure in the history of scuba diving, after the tragic death of his friend Dario Gonzatti during an immersion. Commissioned to sculptor Guido Galletti, the statue was placed at 17 metres of depth, off the coast of the San Fruttuoso bay between Camogli and Portofino. The bronze used to make the statue came largely from old medals, bells and parts of military boats.

The statue has been restored in 2003 to preserve it from water corrosion and natural wear and tear.

The Cristo degli Abissi is one of Liguria’s most popular diving destinations: it is not particularly difficult to reach and it is safe, as the Cristo lies within the waters of the Area Naturale Marina Protetta di Portofino. Of course, we’re talking about a guided diving session: you’ll be accompanied by professional divers in this underwater trip inspired by love of nature and spirituality.

The Empire under water

How could we talk about hidden treasures without thinking of the ancient world? Italy’s wealth of archaeological sites is known everywhere in the world and plenty of us also know about the treasures our seas hold within: the Mediterranean has been a main trading route since the very inception of civilization, so it comes as no suprise that its floor hides plenty of historically and archaeologically relevant findings. Istintinctively, we think of shipwrecks and their treasures, but just off the neapolitan coast, there’s something even more amazing… an entire underwater Roman port.

A scuba excursion at Portus Iulius, the ancient Roman port of Baia

The Romans were great sailors and dominated the seas, for war and for trade. Portus Iulius was an important portual location by the town of Pozzuoli, which the Romans used to call Puteoli. It was active from the 1st century BC to the 4th century AD and was considered an essential strategic location, especially from a military point of view. Its position was naturally protected, an extremely important connotation when it came to war ships in need of rescue or reparation. The port was, in fact, also known for its shipyard.

This amazing feat of Roman technology and architecture is today entirely underwater: after surviving a vulcanic explosion in the 16th century, it succumbed to a phenomenon typical of the area, known as brandisismo flegreo: bradyseism is a phenomenon caused by a gradual upward or downward movement of the Earth’s surface caused by the presence of vulcanic magma underneath it. In the area around Pozzuoli, it takes the name of “flegreo” because of the Campi Flegrei, the volcanic area near Pozzuoli. Because of this, Portus Iulius litterally sinked into the sea for centuries and was only rediscovered in 1956, thanks to aerial photos taken by Raimondo Bucher, a military pilot. These were the first to show the presence of what turned out to be a large portual complex of about 10 hectares, at a variable depth of 2.5 to 5 metres.

Today, Portus Iulius can be seen particularly well from the top of Monte Nuovo, on a cloudy day: the outline of the port is then clearly visible under the crystalline blue waters of the bay. Of course, one can also enjoy a diving session in the area and see Portus Iulius from very close. Information about it are available through the Centro Sub Campi Flegrei.

It’s true, many of these places are not accessible to the public, or only visible in specific moments in time, yet their charm is undeniable.

Portus Iulius’ beauty comes from history and its breathtaking location. Location is also the winning card of the Cristo degli Abissi, a statue protecting one of the most picturesque bays in Italy. Curon Venosta‘s bellfry and its lake, surrounded as they are by the beautiful majesty of the Alps, found in landscape a strong ally to their popularity.

However, it’s probably the slight melancholy surrounding Fabbriche di Careggine, Osiglia and Madonnuccia that better embodies the idea of what Italy underwater is: sleeping villages, unseen and silent, surrounded by an aura of mystery, but also by a deep sense of unsettlement.

Places once filled with life, people and emotions, eternally silenced by the coming of progress and the needs of modern life. To us, today, remains the possibility to witness, every now and then, the moment when sun and fresh air hit the walls, stones and bricks of these villages of water and silence. I’ve never been to one, but I can’t help thinking I would feel an extreme sense of sadness while walking through what remains of them, the same feeling one gets when looking at old photos of people you know you’ll no longer see.