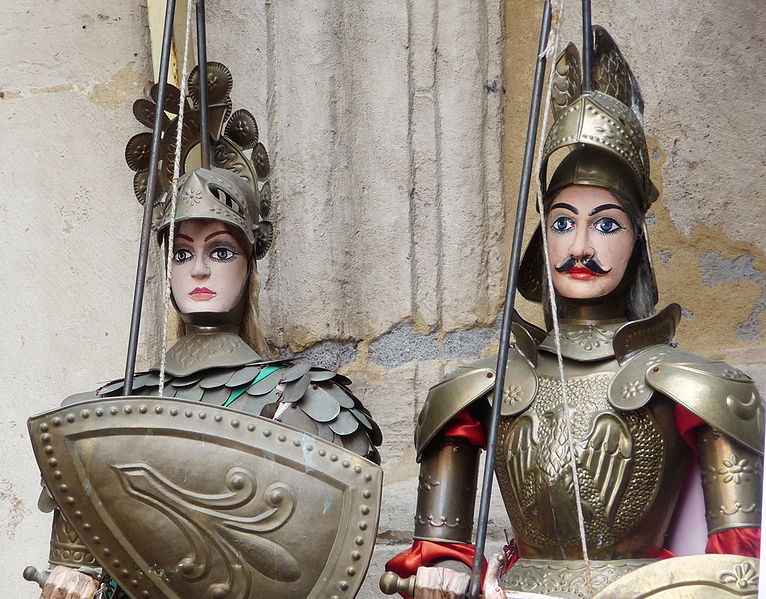 Any visitor to Palermo has seen them: shops selling wooden marionettes, bedecked in bronze armor with historic names like Orlando and Rinaldo. They may look like tacky souvenirs made for the tourist market but these marionettes are a core symbol of Sicilian folk-art and as integral to the Island’s cultural identity as painted horse carts and cannoli. The marionettes are the major props in the Opera dei Pupi, a traditional form of Sicilian entertainment that is trying to survive in the age of mass media and television and is protected as “Intangible” Cultural Heritage by Unesco. Today the shops selling replica marionettes outnumber the actual theatres but there are still several family-run.

The modern tradition that can still be seen in Sicily originated in the early 19th century but the roots of the Opera dei Pupi stretch back to at least the 15th century. Puppets and marionettes were a popular form of entertainment throughout Medieval Europe for all classes of people and it is probable that the earliest performances involved local history and folklore. With each subsequent conqueror of Sicily, a new group of people would leave their own cultural stamp upon the emerging folk tradition. In Sicily, this form of entertainment uses wooden marionettes on strings and metal wires instead of hand puppets made of cloth.

Sicilian marionettes range in size depending upon the locality. Examples from Catania are nearly twice the size of those used in Palermo and the closely related puppet tradition of Naples uses marionettes that are a meter tall.

Many of the characters portrayed in the Opera dei Pupi come straight from the history of Southern Italy. Heroes of the Norman Conquest such as Roger (Ruggiero) and Tancred (Tancredi) do battle with the Saracens or vie for a maiden’s hand. Other characters like Godfrey (Goffredo) and Reynald (Rinaldo) are fictional characters whose origins are based upon real-life participants in the Crusades. The most popular character is arguably Orlando, the Sicilian version of Charlemagne’s (Carlo Magno) nephew Roland and the most common marionette sold in gift shops.

The villains of the Opera dei Pupi are more fanciful and besides the Saracens who once ruled Sicily, are based more in legend than in fact. Agricane is one such villain who is identified as the King of Mongolia and fights Orlando for the love of a princess. Another foe of the hero Orlando is Alcina, a sorceress. Argante is a powerful Saracen warrior that battles Tancredi in a fight to the death at the walls of Jerusalem. Whether good or evil, the characters and their deeds are all much larger than life, the equivalent to today’s fictional super heroes.

The subject matter of the Opera dei Pupi is derived from various periods of Sicilian history, works of literature, folklore and comedy. Performances that pit the Norman knights against the Saracens are taken from Sicily’s turbulent history, with various liberties taken for the sake of art. Much has been adopted from the lyric poetry of the Troubadours and the epic tales of chivalry known as the Chansons de Geste (the songs of deeds). The performances that include Orlando and Carlo Magno are derived from the famous Song of Roland (Chanson de Roland) and the subsequent Italian interpretations such as Orlando Furioso by Ludovico Ariosto. The Opera dei Pupi also covers subjects from classical Greece and Rome such as Homer’s Iliad and Odyssey. Religious and Biblical performances can include tales from the Old Testament, including the tale of the Exodus.

The dialogue of Sicilian Puppet Theatre is usually improvised, even if the plot remains the same. Therefore the skill of the performer is not only displayed in the actions of the marionettes, but also in the clever improvisation of the dialogue. A major component of the Opera dei Pupi is the violence: swordfights, jousts and battles with monsters or sorceresses. When a hero slashes with his sword, limbs can fall from the villain. In some performances the wounds actually bleed, the blood being made from beet juice. Much of Sicily’s history has been violent and over the centuries it has imprinted itself in this most traditional form of entertainment.

Sadly, the popularity of Sicilian Puppet Theatre began to decline sharply during the middle of the 20th century. With the advent of more modern forms of entertainment, many family-run puppet companies had to close, selling off their props to collectors. Today there is no shortage of shops in Sicily selling replica puppets for the tourist market, but actual puppet theatres have been in serious decline.

However, the Opera dei Pupi has not died out completely and there are now actions being taken to preserve this unique folk-art. UNESCO has designated Sicilian Puppet Theatre as part of humanity’s “oral and intangible heritage” and has devised a plan to save it from extinction. Part of the plan includes the formation of puppet theatre festivals and even a Sicilian puppetry school. These endeavors, in conjunction with Sicily’s ever-growing tourist industry will hopefully ensure both a supply of trained artisans as well as an eager audience.