Isn’t there something alluring in the macabre?

Ok, you may not entirely agree with me, but the Capuchins Crypt in Palermo should still be on your to-do list when visiting the city: a catacomb filled with the remains of many a friar, as well as lay people, the Crypt is a place of eternal rest, prayer and reflection, which can be respectfully visited.

Let us take a walk through its corridors.

It has been said that Sicilians have an obsession with death: it is still very common to see elderly widows wearing black for much longer than anywhere else in the country, some of them choosing the color for the remnant of their lives. Sicily is also known as a land where professional mourners, historically present in Italy since Roman times, but nowadays virtually non-existent anywhere, were plenty, even in periods where they would not be found anywhere else.

It is hard to say where this cult of the dead comes from: in part, it is certainly rooted in Catholicism, but it finds its most ancient origins in the cult of the dead of Greece and Rome. Nevermind their origins, the cult of the dead and, in fact, this reverent worship of death itself are still alive in Sicily, and no place better exemplifies this than Palermo’s Capuchin Crypt. Macabre, even frightful to some, in truth the Capuchin Crypt is a symbol of an attitude to death which no longer sees it as a moment to fear, but rather as a natural passage in the existence of each individual.

Of course, a good chunk of the Crypt’s visitors of today, do not think of this. They are more interested in the gruesome and frightening, in the unsettling and the fearsome that emanate from the embalmed, mummified corpses held in its chambers. To the Capuchin Friars, to whom the Crypt belong, this popularity has helped to finance maintenance works for the monastery and the Crypt itself, producing a much needed source of income.

The Capuchin Order is an offshoot of the more famous Franciscans, that branched out in the mid sixteenth century. Their name comes from the distinctive hood the monks wear, and that has since lent its name to the popular coffee drink Cappuccino, whose foamed milk top it resembles. Even though this Order of the Friars Minor originated in the Marche region of Italy, their unique take on the mortal body after death make them a perfect fit for Sicily. In fact, the first monk to be embalmed was placed in the crypt shortly after the Order arrived in Palermo.

Entrance to the Crypt is located at Piazza Cappuccini, which is a short walk from the Palazzo Reale. It is an unassuming building that conforms to the Order’s vow of poverty and may be overlooked if you miss the signs. On arriving, you may be greeted by the elderly monk who watches over the crypt as he gestures toward the cool and dark stairway that leads to it. While walking down the steps, one may be reminded of Dante’s inscription above the gates of Hell: “Abandon all hope, ye who enter here.” It is not to Hell you walk to, however. It is, in the end, a serene place of rest, albeit creepy for most. 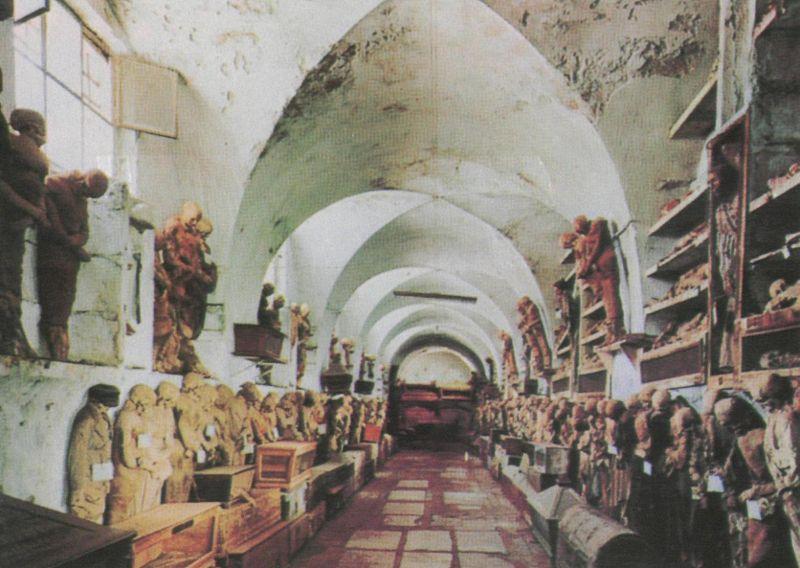 Once inside, the crypt feels a lot like the set of a movie, although not many cinematic creation can compete with what visitors see here: hundred of bodies, dressed in their Sunday’s best, are suspended by hooks on the walls, corners are filled with bones, placed in such a way to create articulate and elegant composition. Creepy, yet, beautiful. The bodies, in various levels of decay stare down (some with their own eyes) looking like they are ready to grab you, wanting you to join them.

A creepy, eerie feeling surrounds you as you walk along the halls. Suddenly the ghostly voice of a monk echoes through the chamber stating “no photo.” It makes you wonder why anyone would want to take pictures in the first place. If ghosts could be caught on film, it would certainly be here. Pictures are not allowed because flashes could damage the mummies, but also because, in the end, this is a consacrated place and, well… a cemetery. There is also a sense of respect towards the people resting here, which needs to be kept.

Even though it seems like a hodgepodge of bodies, some hanging and some in open coffins, the crypt is organized by social status and gender.

The first section contains the monks of the order, the original residents of crypt. This section includes the body of Brother Silvestro da Gubbio, the oldest member of the crypt, whose remains have been welcoming visitors since 1599.

The Men’s Section is next:  all dressed in clothing of their time period and looking ready to rise and join the living, these mummies allow an interesting outlook on the habits and fashion of the time of their burial. The Women’s Section is very interesting as there is a special area for “virgins” denoted by bodies that wear a metal band on their skulls. These maids, still wearing their silk dresses and bonnets, are very spooky. The Professors’ Section is actually the area designated for doctors, soldiers and other men of profession, and include some famous individuals such as the painter Vélasquez and sculptor Lorenzo Marabitti. The soldiers are dressed in their high uniforms, which are still colorful after nearly two centuries. The Priests’ Section is small, but contains numerous holy men still wearing their tattered cassocks and ghostly white vestments.

The secret to the embalming process is visible toward the end of the tour as one of the “strainer rooms” used to desiccate the bodies is open to view. The process is facilitated by the atmospheric conditions in the crypt itself, that naturally wick away bodily fluids. However, the bodies are then embalmed using vinegar before being dressed according to family requests.

This process was halted in 1871, with Brother Riccardo being the last buried under these conditions. However,  the small chapel at the end of the tour houses the very last person buried here,  a child that has come to be known as “sleeping beauty”. Rosalia Lombardo died in 1920 and, thanks to a secret chemical embalming process, she still looks as if she were sleeping. Encased in a glass-covered coffin, it is hard to believe that this little girl died almost 100 years ago. She looks like she could open her eyes at any moment, a truly haunting vision that stays with you for days. In recent years, Rosalia’s body has begun to show signs of damage and preservation action has been taken to halt the process. As the process used to preserve the body is still unknown, it is not simple to find a way to stop decomposition, as any chemical could interact with those used in 1920 and could potentially destroy the body. An interesting documentary produced by National Geographics a couple of years ago has followed the research of a young Italian historian, who has managed to get to know the heir of the doctor who once embalmed Rosalia, and found papers potentially holding the formulas used to preserve her.

It is not only Rosalia to be in danger: the micro-climate that helped the preservation of the bodies in the crypt for so many centuries has been changing in recent years, becoming more humid, hence less favorable to preservation. This is a true danger to the crypt inhabitants, whose process of decomposition could start again, even after centuries.

As you leave, you can support the monastery by purchasing postcards of your favorite corpses from the crypt. Photos, as mentioned, are not allowed, so these are the only manner to keep “souvenirs” from your visit. Buying a postcard or a book in the gift shop will give something towards the maintenance of the crypt itself, and potentially could help in preserving it for longer.

At the same time,  this is not a place for souvenirs. It is, in the end, a place of rest and respect. Too many visit the Crypt with only the idea of having a quick thrill in mind: this is human and justifiable, yet, one cannot and should not forget to bring respect to these bodies, as they are, still and foremost, human beings, laying in their final resting place.

Certainly, it is almost impossible to walk through Palermo’s Capuchins’ Crypt without feeling to be part of a horror movie. If you are particularly impressionable, you should give this place a miss. And definitely avoid it if you travel with children. However, you should not miss it if you are a history lover, have a penchant for the macabre or…well… if you are a mortician!