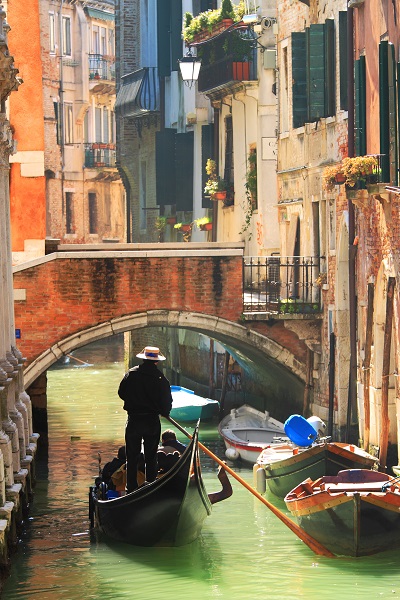 Venice is, today,  one of the world’s most popular tourist destinations. It is a city for lovers who long to ride together in gondolas, and is the place where art and architecture aficionados come to see buildings designed by great artists like Giorgione, Tintoretto and Veronese. In the past, however, Venice was seen, more than anything else,  as one of the world’s greatest naval powers. Established in the 5th century, the city of Venice extends over 118 small islands located in a bay of the Adriatic Sea to which Venice is connected by three inlets.

Venice was one of the world’s main naval powers through the Middle Ages and the Renaissance. The city was a platform for the Crusades and a huge hub of transport and trade. Known the world over for its art, spices, grains and silk, the city was perhaps even more famous for its musical and operatic prowess and was home to several distinguished composer, such as Antonio Vivaldi.

Venice attracts many tourists each year, with approximately 18 to 20 million people visiting the city every 12 months. The biggest draws in the city continue to be the Grand Canal, the Basilica di San Marco, Piazza San Marco, and the luxurious Lido di Venezia. Unfortunately, at times the crush of people makes sightseeing in Venice complicated, but it does not dim the beauty of the city. Henry James once said “Though there are some disagreeable things in Venice there is nothing so disagreeable as the visitors,” a quote that still rings true today.

The Venetian Lagoon covers an area of 550 km, extending its boundaries from the River Sile to the Brenta in the south. In this area, the land covered by Venice’s lagoon islands makes up approximately 8% of the lagoon itself, while 11% is open water, and 80% is covered by mudflats, tidal shallows, and salt marshes.

There is often issues with high water levels in the lagoon, especially around springtime. During this time of the year, Venice is often flooded, determining the well-known phenomenon of the acqua alta or high waters.

Located in the Venetian Lagoon, the island of Murano is linked to Venice by vaporetto. World famous for its blown glass, Murano is located approximately one mile north of Venice.

Originally founded by the Romans, in ancient times Murano was a popular fishing village. The island was also known for its production of salt and was a trade center through the port it controlled at Sant’Erasmo. The decline of ancient Murano started in the 11th century, when the islanders began moving towards the Dorsoduro area.

Today, Murano is internationally known for its blown glass, a tradition that started on the island because of Venice’s fear of fire. To avoid fires to their wood structures, Venetians moved their glassblowers to Murano in 1291 and an industry was born. Eventually, glass makers were seen as some of the most important people on the island and were even given permission to carry swords and were protected by the Venetian State. Often, children of glass makers were married into rich Venetian families.

The island of Giudecca is also located in the Venetian Lagoon and is part of the sestiere di Dorsoduro. Once known as part of the city of Venice, Giudecca is located to the south of Venice’s central islands, and is divided by the Giudecca Canal and San Giorgio Maggiore.

This island was initially given the name of Spinalunga or “long thorn”, probably due to its shape. It is thought that Giudecca may be a misuse of the Latin “Judaica” (“Judaean”), which would be translated as “Jewry.” However, there does not appear to be evidence that a large community of Jewish people lived on the island, and the Venetian ghetto was located in Cannaregio, to the north.

Once an island resplendent with gardens, Giudecca became an industrial town in the 20th century — shipyards, factories and movie studios were all located on the island — and went into decline after World War II. Today, Giudecca is once again regarded as an exclusive residential area and is well known for its churches and dock area.

The island of Burano is located about 7 kilometers from Venice and is most often reached by motorboat or vaporetti. The present population of Burano is of approximately 4,000, and the island is connected to nearby Mazzorbo via bridge. Burano is famous for its brightly colored houses, which attract artists to the area, like the designer Philippe Starck, who owns three. Visitors to Burano will not want to miss the Chiesa di San Martino, the lace making museum and the Oratorio di Santa Barbara.

While Venice might attract millions every year, the beauty of its lagoon and surrounding islands means there is much more to see in the area than just the city itself. It is, in fact, the life itself within the lagoon, and the vestiges of a past made of tradition and splendor, that keeps attracting people to this beautiful part of Italy.