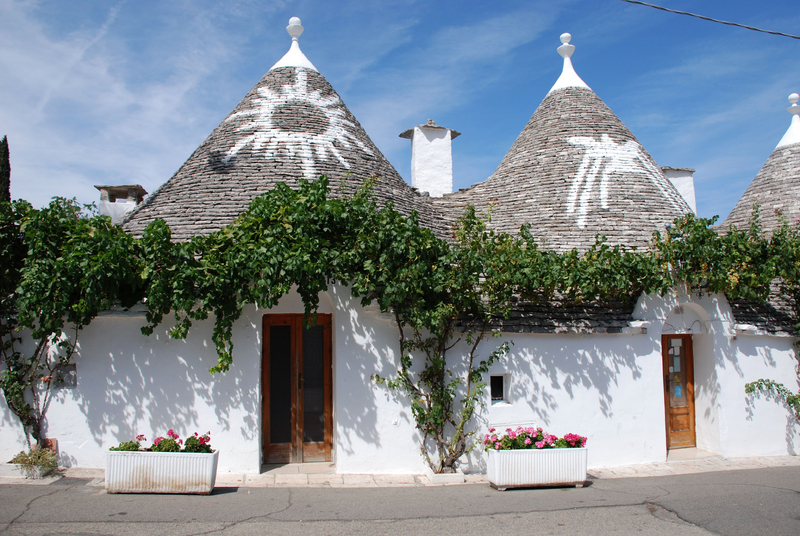 The trulli are limestone houses found in the region of Puglia, which are beautiful examples of the ancient technique of drywall construction that is still used today for houses in the region. The trulli are built from rough limestone rocks and boulders, usually domed or in a pyramid shape, which have been collected from nearby fields. The traditional Apulian stone houses or store rooms often have cone shaped roofs and this style of home is typical not only to Alberobello, but also to towns like Locorotondo, Ceglie Messapica, Martina Franca, Cisterno and Fasano. In the past these traditional structures were built without mortar or cement in order to avoid taxes and this style of building was so popular it is even reflected in the walls that surround the region and its countryside.

Construction of a Trullo

The roofs of a trullo house is constructed in two layers to ensure the structure is watertight. The inner layer is made from limestone boulders and is capped by keystone, while the outer layer is made from limestone slab. The houses were often built directly into the ground in earlier times, however, the majority of the ancient structures that survive today were built on perimeter walls.

In the town of Alberbello there is usually a pinnacle on top of the cone roof of a trullo. This might have been one of several designs chosen for an ancient symbolic value and the cone also may have had symbols painted on it. Such symbols are believed to have included crosses, hearts, planetary symbols or the evil eye.

The walls of such houses are usually very thick so keep the inside cool during the summer and warm during the winter. In most cases these houses have one room under every conical roof. In houses where there are multiple rooms there are also multiple cones, one for each room. Children would generally sleep in an alcove built into the walls and covered with curtains.

It isn’t clear how the trullo design first originated. One of the popular theories is that the idea of dry walls may have been developed to avoid high levels of taxation on the property.

Two of the most famous trulli in Alberobello are the Trullo Sovrano and the Trullo Siamesi, which we have highlighted below.

Trullo Sovrano in Alberobello was declared a national monument in 1930. The imposing building is located in the Sacrament Piazza and was originally built as a residence, but over the centuries was also used as a chapel. In the 1700s Trullo Sovrano even accommodated the relics of Saints Damiano and Cosmo and it was an oratory of the Holy Sacrament from 1823 to 1837. It isn’t clear who built this particular trullo, but it is a significant structure because it shows just what this style of construction could achieve.

The trullo’s entrance is located on the south side of the structure and has two peepholes on either side of the door. There are traces of paintings on the façade at the rear window area, which were created in the first half of the 19th century. Inside the trullo there is a small room for a bed and a spacious entrance along with a large kitchen that leads out to a small garden.

The building is private property and was last restored in 1993. Today the trullo is sometimes used for cultural meetings and temporary shows and was named a World Heritage Site by UNESCO. The town of Alberobello has many trulli and at the beginning of the 19th century the small district consisted of 400 trulli on eight roads, which housed about 1,300 residents. The farms and countryside of Alberobello were also built in the same drywall style.

Trullo Sovrano is an excellent example of some of the larger trulli in the region and has been well preserved over the years. The high level of preservation is thought to be because the trullo was used for several different functions meaning it was never uninhabited for very long.

Among the trulli in Alberobello, which were declared a World Heritage Site in 1996, there are plenty of noteworthy examples including the Trulli Siamesi. The Siamesi is an ancient residence built upon a rock and is one of the most important and charming trulli in the region. The house has no windows and was built on a terrace, the foundation consisting of large rocks. The Trulli Siamesi is famous for its double shape that is also its namesake. The house also has two entrances on different sides of the road with the main door being larger and the smaller door built later.

The double door feature is normally not found in more recently constructed trulli, which makes it likely that the Trulli Siamesi is quite old. The shape of this trullo is in line with the traditional design, taking into account the legends and symbolism that influenced the residents at the time.

The Trulli of Alberobello are some of the most interesting ancient residences in the area, mainly because the ancient construction method is still in use today. The town is one of many in the region that has a large number of trulli, some quite old but still well preserved. Declared a World Heritage Site in 1996, the trulli are not only interesting architecture, but a window into the past.