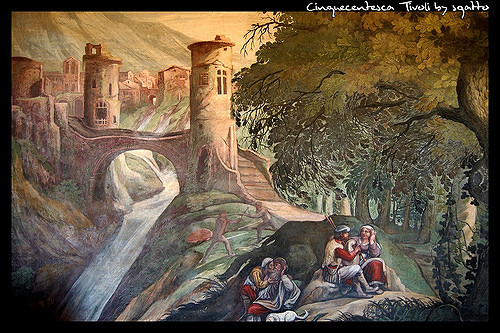 In ancient times, Tivoli had been known as Tibur. This charming town is located in the region of Lazio around 30 km from the city of Rome.

Tivoli hosts two of the most famous villas you can find in all Lazio: Villa d’Este and Villa Adriana. Both locations are part of the UNESCO World Heritage list and a popular tourist destination.

The town is located close to the Aniene River which flows down from the Sabine Hills in the region. The climate of the town is splendid almost all times of the year which is why it has become a very popular tourist destination in the past few years. Since ancient times when the region was home to the wealthy roman residents, many large villas have been built in the area as summer retreats for the rich.

The town is also located on the trade route of Abruzzi to Rome which had made it one of the most important settlements in the area. The population of the town is close to 50,000, located among the historical center as well as the new city. Bagni di Tivoli has plenty of thermal springs where people from all over the world come to bathe due to its healing therapeutic properties. During the 4th century BC the walls were built around the town, some of which are still visible today as well as the temples dating back to the 2nd century BC.

In Tivoli, there are plenty of things for visitors to do. The two villas of Tivoli are the main tourist attraction, along with the thermal baths. Several travelers often visit Tivoli as a day excursion from Rome while many prefer to stay in Tivoli itself because of its peaceful natural beauty in comparison to the crowded touristy places of Rome.

According to ancient legend, Tivoli had been first founded by Catillus who was the son of Amphiaraus. Catillus had come to Tivoli when he escaped from the attacks in Thebes in Greece. During Roman times too the city was quite an important settlement since it was located on the Via Tiburtina which was a very important route for the Romans for crossing the Apennines to reach Abruzzo.

In the earlier years Tibur had been an ally of Rome but later in 361 AD it allied with the Gauls. The defensive walls from this period can still be seen in the city today. Tibur was taken over by Romans and was defeated in 338 BC. In 90 BC the city became an important location and was well known for its thermal waters and its natural beauty. Several Roman villas were erected around the thermal waters around this time.

Villa Adriana, the most famous of the villas from the Roman times is still in Tivoli. The city had again been fortified by the Byzantines in 547 during the Gothic War. However, this was later destroyed by the army of Totila. At one point Tivoli became the duchy of the Byzantine Empire and later it went under the Patrimony of Saint Peter. From the 10th century Tivoli was an independent comune, ruled by elected consuls.

Villa D’Este is a testament to Italian renaissance. Another popular touristic destination is the imposing Rocca Pia.

Tivoli has gained much importance for two reasons. One for its famous Roman Hadrian’s Villa and other for its thermal baths which have several therapeutic properties well known all over the world. The city is visited by thousands of visitors from all over the world because of its waters and thus is well connected to the other locations in Italy. The transport system in Tivoli is well developed which makes it easy to travel to the city.

The city is located only 30 km from the city of Rome. Tivoli is located at the falls created by the Aniene River in the region where it springs from Sabine hills. The city offers beautiful views of the Roman Campagna and the surrounding areas. Those who are travelling by train can get a train travelling on the Rome to Avezzano route. There are also several buses which leave at regular intervals from Rome. Driving down to the city is also quite comfortable since the town is located only a few kilometers from Rome.

The thermal springs of Tivoli are famous since ancient times. During the rule of Emperor Augustus, Tivoli gained much fame for its waters. The Acque Albule Springs in Tivoli is known to be the most sulphur rich spring in all of Central Italy. The springs are located around 4 km from the centre of the city. Due to the high content of minerals in the water, the springs have a distinct smell and are greenish blue in color.

A thermal establishment was built near the springs by the Romans when they realized the healing abilities of the water. Augustus, who had been suffering from rheumatism, had especially ordered the building of this thermal establishment. The ruins of this ancient Roman baths can still be seen in the area today; here the Romans bathed regularly to treat themselves of several different types of ailments. Residents of the area have always known that the waters have the ability to cure several types of diseases and are especially good for mending broken bones. In the ancient times the water of the springs were used for bathing and also for drinking as a health tonic. Several inscriptions have been found in the area which again talk about the healing properties of the area.

The baths were forgotten slowly after the Roman rule. It was only in the 16th century that the people in the region again were reminded of the healing properties of the water of the spring and ever since then Tivoli has been an important health resort. Today, people from all over the world travel to Tivoli to bathe in the sulphur and mineral rich water of the Acque Albule Spring. The modern spa is located not very far from the ancient Roman baths. Even today the water of the spring is used for several treatments for curing respiratory problems, bone problems and even for several different types of beauty treatments.