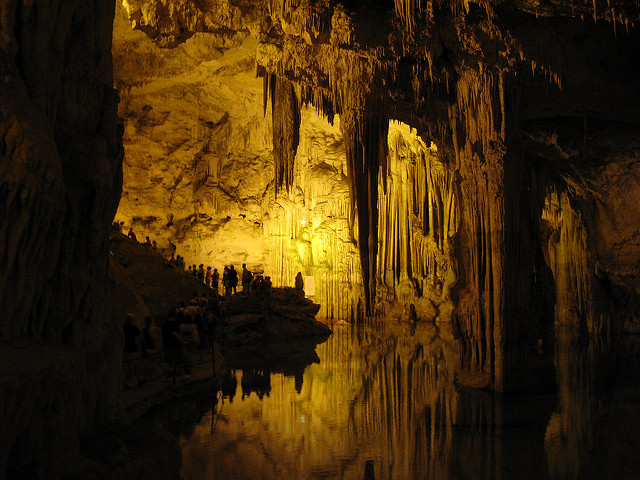 Below you can find a list and brief description of the most famous grottos and caves of Italy.

These caves are called karst caves, and we find them in the Liguria region. This is a perfect side trip if you are already in the area visiting Cinque Terre, a very popular tourist spot. The entire path is half a mile long and features several ponds and one river. The inside of the caves presents many colorful rocks that date back three quarters of a million years.

Further south in our journey among the Italian caves we reach Castellana, near Bari. The caves have an immense entrance and house a vast series of holes and tunnels that descend into the depths, and make it almost impossible to find your way. Therefore tourists are strictly only allowed on organized tours and on defined itineraries. The cave visit can be enhanced by a visit to the impressive speleologist (the scientific study of caves) museum nearby.

A little bit further north, in Abruzzi to be precise, we find another wonderful cave. During World War II Grotta del Cavallone hosted the entire population of the village nearby and it saved many lives. Inside, the cave features several chambers that have inspiring names such as the “Enchanted Forest,” “The Elephants’ Room,” and “The Pantheon.” All of these are quite beautiful.

Located near Duino, in the province of Trieste, this cave has important historical and religious value, as it was a site dedicated to pagan rituals. In fact it is still possible to see a basic altar made of natural limestone; this is a testimony to its early sacred character.

This is actually a non-natural cave but due to its tourist relevance we would like to list it as a “must-see.”.It is located in the park where the Syracuse amphitheatre is, in southern Sicily. The shape of the cave is an “S” and it resembles an ear. It is possible to speak and be heard anywhere in the cave from the entrance; the sound is amplified up to 16 times its original level. The proximity of the theatre makes the Ear of Dionysius a popular spot for curious people willing to try out the ancient acoustic trick.

This group of caves is one of the most famous in the country. Located in the central region of Marche, the caves were reportedly first discovered in 1948, though most sources state that 1971 is when they began to be explored. They feature a series of linked chambers, one of which is a bizarre shape that feels like an endless tunnel when in fact it is one very long chamber. Today the caves are open to the public for daily visits, and they are estimated to be around 190 million years old.

Up in the northeast, close to Trieste, we find the Giant Cave, the largest cave open to the public in the world. Although several tunnels are linked to the cave, there is actually only one immense chamber. The cave contains some important instruments to measure the movements of the Earth’s crust and the sea tides. The overall tour doesn’t take more than one hour.

Moving to Sardinia we find the Cave of Neptune, the Roman god of the sea. The cave was discovered in the 18th century by a local fisherman, and it has become a hot tourist destination. This grotto is similar to the Blue Grotto in Capri, however this has both a sea entrance and another from the land. Beneath the cave lies a salty lake. Nearby are two other caves, including a green cave that contains prehistoric graffiti.