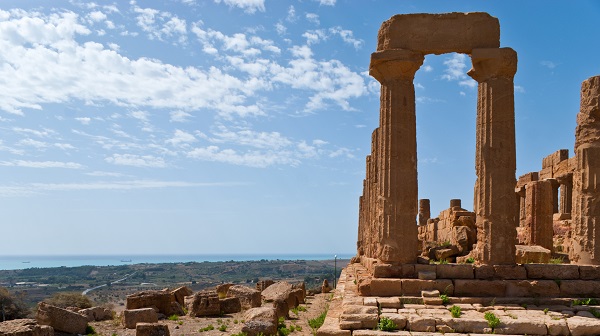 Italian monumental and historic sites are vast in number and several of them are, in fact, part of the UNESCO World Heritage. From top to bottom, the country hosts r5 sites chosen by UNESCO as part of their exclusive list of the world’s most amazing beauties. Organizing your trip to Italy based on its UNESCO Word Heritage Sites can be a lovely and interesting idea, but, because of their high number, it is better to set your visit geographically.

UNESCO sites in the southern part of Italy

This area, which is very close to Naples, is a living treasure and mirrors to the lives and culture of ancient civilizations. Analyzed, studied and visited by many scholars, it attracts huge numbers of tourists, curious to take a glance into the world of ancient Imperial Rome and to discover the secrets of Pompeii and Hercolaneum, destroyed by the Vesuvian eruption of 72 AD.

Agrigento and its surroundings also carry the vestiges of ancient civilization, in this case, the Greek, as the town was founded by Greek population in the 6th century BC and the site includes archaelogical ruins and temples, witness to the glory and magnificience of Magna Graecia. The stunning Doric temples and the overall good conditions of the entire site make the Agrigento area an essential stop for all UNESCO Heritage-oriented tourists. The city itself, it must be said, is one of the most ancient social and commercial centres of the Mediterranean and for this reason is a very interesting place to visit.

Situated in the region of Apulia, Castel del Monte is a Unesco World Heritage Site. Due to its special architecture, mixing several styles, it is considered one of the most characteristic and majestic medieval castles of Italy.  Classical, Islamic and north European Cistercian Gothic traditions all find place within the breathtaking structure of this building, erected under the reign of  Frederick II of Hohenstaufen, himself symbol of multi culturalism and knowledge.

Cilento and Vallo di Diano National Park with the Archeological Sites of Paestum and Velia, and the Certosa di Padula

Situated in the region of Campania, these are all sites included in UNESCO World Heritage list. The area of Cilento used to limit the boundaries between different peoples: Greek, Etruscan and Lucanian. It is unique for its sanctuaries and for the two cities of Paestum and Velia, both witnesses to the presence of ancient cultural spots.

The Amalfi coast is not an ordinary coast, because every element makes it an original place: its buildings, its terraced hills covered in lemon trees and its cliffs, rising straight from the sea, all contributed to make it an exceptional natural beauty. It is in name of its uniqueness that the Amalfi Coast has been awarded a place in the UNESCO World Heritage list,  to which the architectural and artistic interest of the town have also deeply contributed. All the towns present in the area deserve a visit, as the way they were  built and their geographical location make them even more special. The whole area is considered a  UNESCO site, yet, its most famous locations are certainly Amalfi, Ravello, Positano and Maiori.

The town of Napoli, Naples, is considered a place of great historical and cultural relevance, because it shows within its perimeter the presence of all the cultures that, throughout the centuries, have inhabited the Mediterranean. The underground town and its artistic monuments are considered the main reasons behind the choice of UNESCO to include Naples’ historical city centre in its Heritage List.

The presence of past and ongoing volcanic activities make these islands special: the Isole Eolie (Alicudi, Filicudi, Lipari, Panarea, Salina, Stromboli and Vulcano) still give a lot to study to the scholars working  in the field of vulcanology.

The Etna volcano is the most active stratovolcano in the world and the highest Mediterranean islands’ mountain. Its eruptive activity has been documented since ancient times, and the presence of a particular flora and fauna makes it a truly unique place, also from a scientific point of view.

The Royal Palace of Caserta was built by the architect Luigi Vanvitelli as the countryside house for the Bourbon family, who spent most of their time in Naples. In the 18th century, its majestic rooms were animated by a busy vita di corte, court life, and the royal family spent a lot of their time in the surrounding green areas. It is, indeed, the Reggia’s parks and waterfalls that most impress the visitors and make it compete in beauty with the royal palace of Versailles, residence of the Bourbon family in France. The design of the building, as well as the size and richness of its gardens, helped the Reggia di Caserta to enter the UNESCO World Heritage Sites’ list, along with the closeby area of San Leucio, famous for its historical production of silk.

The Sassi and the Park of the Rupestrian Churches of Matera

The southern region of Matera hosts an area which was inhabited since the Palaeolithic and these certify the presence of a troglodyte settlement.

Syracuse and the Rocky Necropolis of Pantalica

Although they are both situated in the region of Sicily, they are two different complexes, preserving elements dating back to Greek and Roman times. Syracuse keeps the ancient nucleus of ancient Ortigia, founded by Greeks in the 8th century BC and includes the remains of the Temple of Athena, a Greek theatre, a Roman amphitheatre and other important monuments. The Necropolis of Pantalica was an ancient cemetery, most likely in use between the 13th and 7th centuries BC, where there are more than 5,000 tombs, all cut into the rock.

The Trulli of Alberobello

When talking about Apulia, one’s mind runs immediately to the famously beautiful trulli. These dwellings, typical of the area only, are known worldwide and are characterized by their pyramidal shape with a white body and brown roof, and they were built following a prehistoric technique based on a drywall construction method.

The Roman Villa del Casale, Sicily, is another Italian UNESCO World Heritage Site linked to the Romans: important sign of a well developed rural society (itself a clear result of rural economical well being), it is considered one of the most luxurious Roman villas, thanks to its mosaics, which are among the best preserved ever created in Roman times.

Unesco Sites in the Centre of Italy

Unesco Sites in the North of Italy – part I

Unesco Sites in the North of Italy – part II