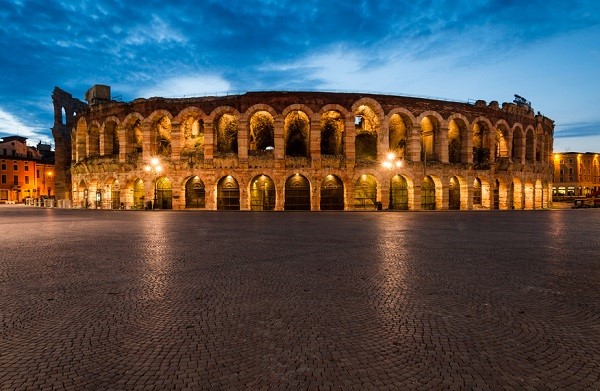 The UNESCO sites to visit in the Northern part of the country are rich in number and spread among the regions of Lombardy, Liguria, Piedmont, Veneto, Emilia-Romagna and Friuli-Venezia Giulia.
Monuments, pieces of art or interesting places, they have all been considered so beautiful and worthy to be included in the list.

In this part of the country you will find several cities whose architecture, style and monuments are considered of great interest and value:

Not only the famous legend of Romeo and Juliet, but also the architecture and aspect of the city have made it famous. The town is considered a perfect intact example of military fortified town in Europe, which has evolved in the course of two thousand years keeping footprints of the periods of Antiquity,  the Middle Ages and Renaissance.

City of Vicenza and the Palladian Villas of the Veneto

Vicenza is another northern town of Italy part of the UNESCO Heritage List. It was founded in the 2nd century BC in what is the Italian region of Veneto. The Palladian villas in the Vicenza area are also part of the list. Andrea Palladio inaugurated an architectural style, perfectly embodied by the villas, which spread in other countries and which was named after him, the Palladian style.

Ferrara, City of the Renaissance, and the Po Delta

Ferrara is considered one of the main centres of the Italian Renaissance, as it attracted several intellectuals and artists in the 15th and 16th centuries. The palaces of the House of Este are a perfect examples of its past and of the architecture of the town, which, together with the Po Delta, are some of the reasons Ferrara is a UNESCO Heritage Site.

Genoa: Le Strade Nuove and the system of the Palazzi dei Roll

Genoa is the largest portual hub in Italy, along with Trieste, and has a glorious past as Repubblica Marinara. The UNESCO parts of the town are the Strade Nuove, new streets, and the system of the Palazzi dei Rolli in Genoa’s historic center. They were built in the flourishing period of the late 16th and early 17th centuries and the Strade Nuove include Renaissance and Baroque palaces, all part of an extensive urban development project.

These towns are both situated in the Po valley and represent two different types of urban development. Mantua is characterized by the juxtapposition of several urban elements, of different origin. Roman, Medieval and Baroque vestiges are found in the town, a variety that makes for much of its beauty. Sabbioneta was, on the other hand,  built all at once, following the urban concept envisaged by Vespasiano Gonzaga Colonna: it is, in other words, a factual town based on a fully ideal view of a specific urban space. A very different urban concept from that which originated Mantua. Although created with different purposes, both towns have been considered great examples of urban and architectural projects, which gained to both a place in the UNESCO Heritage List.

Portovenere, Cinque Terre, and the Islands (Palmaria, Tino and Tinetto

This area of Liguria’s coast represents a perfect blending between human settlement and nature. The harmony coming from this relationship has created an outstanding balance between architecture and natural landscape, which made the area part of the UNESCO Heritage List.

Venice and its Lagoon

Venice is considered a unique town for its position, life and lagoon. What once used to be the Serenissima, an ancient Repubblica Marinara, is still one of the most beautiful sites in the entire world.
The artists Bellini and Giorgione, Tiziano and, Tintoretto, Veronese and Tiepolo, all decorated the town with their work, giving light, color and magic. Monumental complexes such as Piazza San Marco, the cathedral, Palazzo Ducale are only some of the examples of the town’s magnificence. Moreover, Venice is also peculiar for its geographical position and semi-lacustral habitat, which makes life not that easy for local inhabitants.