Europe is notorious for having small roads, utility cars, and everything reduced to minimal space, therefore it shouldn’t come as a surprise that several nations in Europe are the size of a few blocks in New York City. Among these mini-countries that include Andorra, Liechtenstein, and Monaco, two, San Marino and Vatican City, are on Italian territory. Despite their physical location, they are both very independent and live their history just as other great nations do.

San Marino is on the mountains in the northern central part of Italy, on the Adriatic side, while Vatican City is in the heart of Rome. 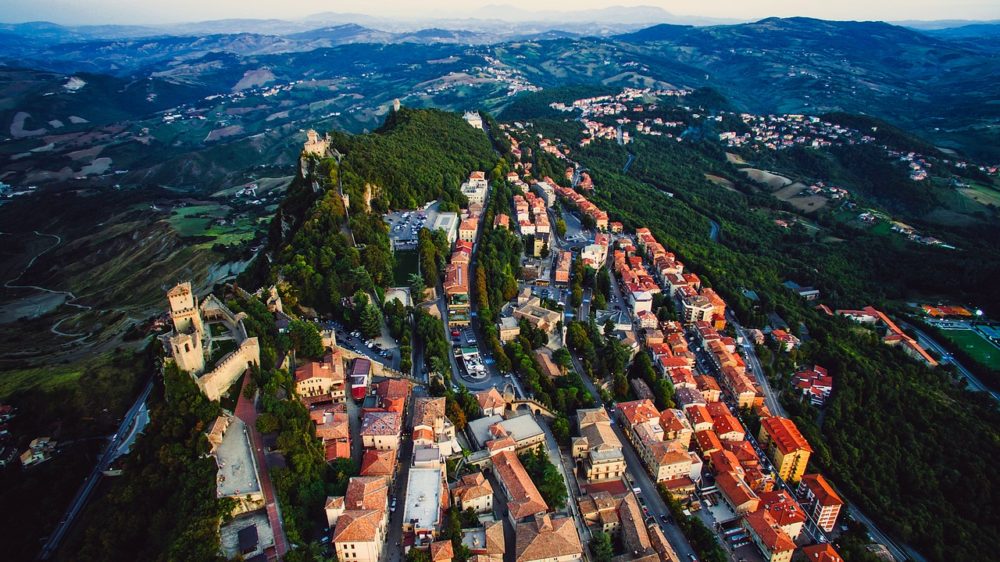 These two countries have several interesting characteristics, and even in the modern world their presence is important.

Let’s begin with some interesting facts: San Marino is the oldest Republic in the world, followed by the United States, whereas Vatican City is the smallest country in existence today. As a result of their history, both countries are a true heaven for all those loving the subject. They both use Italian as official language and followed Italy in terms of currency – from the Italian Lira to the Euro – when the EU made its historical shift, although neither are EU members.

San Marino, as we said, is the oldest republic still existing today: interesting to know that its calendar officially begins on the 4th of September, the date of the actual birth of the Republic itself, well over 1700 years ago. San Marino holds diplomatic relations with all the major nations and even has a rather large immigrants’ community in the US, mostly concentrated in Detroit. However, their most important political and diplomatic ties are with Italy, with whom very strong and clear agreements exist to regulate relations. This is especially important in fiscal matters, as San Marino can easily be considered a potential fiscal heaven.

Vatican City has a different history. It obviously represents the Catholic Church and, although very small, is probably one of the most powerful countries in the world as well as one of the richest. Many maintain that the Catholic Church and the Vatican are not exactly the same thing in terms of business matters, and this is true. However, we may possibly compare it to a large multinational corporation, and if that were the case the Vatican / Church would be the largest in the world by far, with approximately 25% ownership of the entire world’s real estate. As with San Marino, the relations between Vatican City and Italy are very highly regulated, and have been since the first recognition of the Vatican in 1929, by Benito Mussolini.

In the past, Italy was truly like a “mother” nation to both small countries but in more recent years, with the ever-changing geopolitical realities, both San Marino and Vatican City have become much more internationally active. Now they entertain relationships with many other countries, including the United Nations, and are not always in line with the Italian government and its policies.

Another interesting element of the two states is the right to citizenship. Where San Marino has a formal system very similar to other nations, with passports and so on, Vatican City grants only temporary citizenships to people directly working in the Vatican and their close families. Citizenship in that case is a privilege with a due date, unique in the world.

Both San Marino and Vatican City are proud of their status as nations, and continue to exist independent even from that nation that surround them, Italy. Next time you are in Italy, take some time to be a tourist in these nations as well; you can then say you visited three countries!