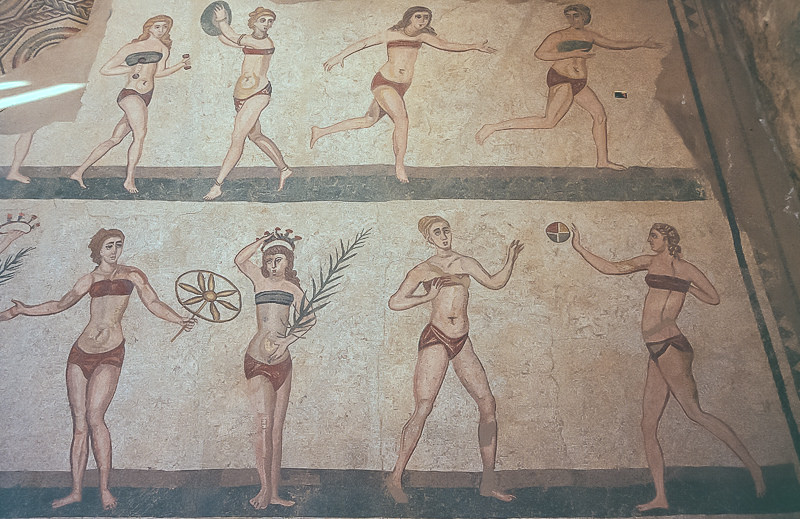 Villa Romana del Casale is an ancient Roman estate located outside Piazza Armerina in the Sicilian countryside. Built in the 4th century BC the villa was originally the center of an agricultural estate. Since the 19th century excavations have taken place at the site and some of the world’s most beautiful examples of Roman mosaics have been uncovered.

History of the Villa

The villa was constructed by the Romans in the 4th century AD on the site of an older castle. Even after the villa ceased being an agricultural estate it remained inhabited and a small village called Platia grew around it.

The complex was virtually destroyed during the attacks by the Visigoths and Vandals in the region. The villa was completely abandoned during 12th century. A landslide later damaged the villa further and the people living around the area then moved to the location where Piazza Armenia is now located.

The complex was then largely forgotten, even though parts remained above ground, and the region was cultivated for agricultural crops. It was only in the 19th century that traces of mosaics and parts of columns were found. Archeological excavations officially began later in the century.

Paolo Orsi was the first to conduct a professional excavation of Villa Romana del Casale in 1929. Giuseppe Cultrera followed in 1935 and the last excavations were conducted between 1950 and 1960 by Gino Vinicio Gentilli. In later years a cover was built to protect the priceless mosaics and in the 1970s additional local excavations were carried out by Andrea Carandini.

According to scholars the Romans used most parts of Sicily as agricultural estates called latifundia. The large size of the Villa Romana del Casale and the rich quality of its artwork suggests it was the center of such an estate. Although it is not clear who the villa’s original owner was it is thought he could have been a member of the royal family.

The villa was likely used for many purposes. Some of its rooms were residential while others appear to be for official purposes. Many rooms have yet to be identified. It is thought that the villa’s owner used it to entertain the locals and clients.

The Rooms and Location

The villa was built as a single storey structure with entrance to the main peristyle being through the atrium to the west. The thermal baths were located at the villa’s northwest side. It is believed that there were even guest rooms on the north side and some private apartment as well as a large basilica.

The architecture of the villa was determined by several factors. The fact that the villa was constructed over an older structure as well as its location on a slope, and the sun and wind direction in the area, all played parts in determining the design. The corridor, the basilica and private apartments are located on higher ground. The middle ground housed the entrance, the dining area and the guest rooms and the lower ground held the thermal baths.

The entire complex is quite unique as it was organized around three main axis. Even though there are several different elements in the design they were built simultaneously and formed a united structure.

The villa is most famous for the wonderfully preserved Roman mosaics found inside. On the floor of the room now known as “The Chamber of the Ten Maidens” a glorious mosaic depicting bikini-clad girls was uncovered. These women are shown participating in various sports such as running, weight lifting and various games involving balls.

Another of the mosaics shows a woman with a crown in hand holding a frond. One of the most well preserved mosaics depicts a hunting scene with dogs; the figures are shown hunting for a variety of different animals.

Villa Romana del Casale and its mosaics have been recognized as Unesco Heritage Site in 1997.

Thank you for your very nice feature concerning the Villa Romana Del Casale near Piazza Armerina in Sicily. I had the good fortune to visit it in February before the life threatening Covid-19 situation put a stop to travel. My visit was extremely revealing and I came away amazed. Back in Canada, I began to consult my books which mention these mosaics. One is The Face of the Nude by John Brophy, Tudor Publishing Company, New York, 1968. This edition was published posthumously since Mr. Brophy died in 1965. Plates 9-10 feature the ”bikini” girl holding the wheel. This image and the others are part of a floor mosaic completely covering the floor of one room and superimposed on an earlier mosaic, part of which is visible in the upper left hand corner when the image of the mosaic is shown in its entirety. This mosaic is a heavy slab and I presume it has been left in situ from the time it was installed. Mr. Brophy recognized its origin but claimed ”and now to be seen at Rome in the museum…of the Baths…of Diocletian…” I have often visited this site when in Rome. I do not recall seeing the Villa Del Casale mosaics there although it has been converted into a fine archaeological museum which is sometimes used as an exhibition venue ( I attended one featuring some Rodin sculptures). Do you know anything about this? If not, where could one find information concerning the late Mr. Brophy’s attribution? Thank you.