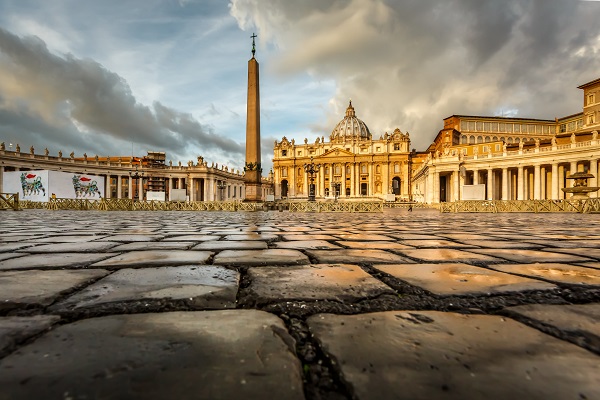 While the Vatican City is in Rome, it is a separate body of government from that of the rest of Italy. The independent State of Vatican City was created in 1929 through the decrees of the Lateran Treaties in response to the unification of Italy and the annexation of Rome in 1870. The Vatican City has its own legislative and executive branches, although judicial concerns are still handled by the Italian system. The Vatican City is less than a half of a square kilometer and is home to less than 900 people but remains a political and spiritual force throughout the rest of the world.

The Sites Of Vatican City

Although many of these sites names we recognize from our history books, the scope of their importance was something that was only familiar to artists and practicing Catholics for many generations. The now famous novel Angels and Demons (the prequel to Dan Brown’s The DaVinci Code) created a large bubble of interest in the Vatican City just in the past couple of years.

The town square of the Vatican City is a work of art unto itself. Created by the artist Bernini for Pope Alexander VII over the span of two years (1656-1657), the “square” is actually elliptical in shape and contains a colonnade crested with exquisite statues. A large obelisk surrounded by fountains sits in the middle of the square, and an enormous marble platform leads from the square to St. Peter’s Basilica from which the Pope delivers his weekly blessing.

The original basilica was built in the 4th century as the final resting place for the tomb of St. Peter. The “new” basilica was built about 500 years ago over the foundation of the old one. The basilica is easily the largest in the world, and is considered the spiritual center of the Roman Catholic Church. It is replete with monuments, sculptures, and statues, the most famous being Michelangelo’s La Pietà.

The main altar holds a bronze-encased throne that is thought to have been used by St. Peter. More athletic visitors can climb the steps of the Basilica’s dome to see a panoramic view of the entire city of Rome. There is also a tour available that takes you underneath the basilica to see all the relics of St. Peter, which are kept under the high altar.

The Sistine Chapel is the home to the two world-famous Michelangelo fresco’s “The Last Judgment” and “Genesis”, as well as Boticelli’s “Temptations Of Christ”. Other frescoes by 15th century Italian masters complete the area. The Sistine Chapel is the Pope’s official private chapel, and the place where cardinals from around the world are brought together to elect a new pope.

The Vatican museum is the home to centuries worth of treasures collected by and gifted to the papacy. Collections of ancient Roman, Etruscan, Greek, and Egyptian relics and a vast collection of Renaissance pieces are some of the most famous exhibits. There is so much to see, that the museum staff will offer you can get a color-coded map of the museum layout to help you plan what you want to see most around the time that you have to spend.

Although the summers are hot and humid, and dressing for comfort can be a necessity, keep in mind that if you plan on visiting the churches of Vatican City and surrounding Rome, you will not be allowed in if you are wearing shorts, short skirts, and/or a sleeveless top. This goes for men and women! Make sure you pack some light comfortable pants or a long skirt, and a top with sleeves. A light pull-on skirt and wrinkle-free blouse that can be carried in your bag and pulled over your other clothes is a great option! Formal Vatican ceremonies require an even stricter level of dress. Formal attire is a necessity. Dark suits for men, and high necked, long skirted dresses or suits for women. While it is not necessary, it is customary for women to wear a mantilla (a black lace scarf) covering their hair.

Faith Harper is a freelance writer who resides in Houston, TX. She can be reached at WredenHarper@aol.com