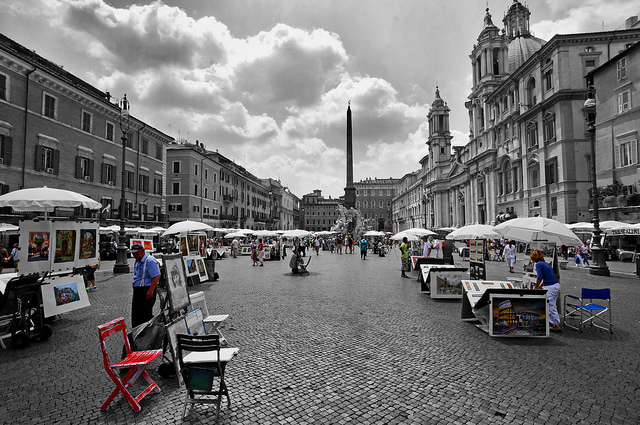 My first time in Italy was in 2003 when I visited my brother-in-law, who at the time was doing a Master’s in the School of Advanced International Studies (SAIS) of the Johns Hopkins University. We mainly spent time in Sicily (Siracusa and Taormina), Bologna and Rome: here are some of my first impressions about the country!

Cars are much smaller

As you would expect, cars in Italy are significantly smaller than in the United States.

I saw many interesting small cars, but my favorite was definitely the Smart. Smarts are good looking cars, with two seats, and plenty of headroom. I also saw plenty of scooters, such as the Vespa. (I was shocked to see an entire four-person family on a single scooter). There were very few SUVs, but I did see several Mercedes taxis. Many people in the United States don’t realize that in other countries, Mercedes sells cheaper cars that taxi companies love.

Italians and their love for black

Italians seem to love the color black, and leather. Of course, they really seem to like black leather. I think what amazed me the most was that I saw so many people wearing black coats, shirts, sweaters, pants, and boots, in 70-80 degree weather. Some people actually seemed cold. Where I live (upstate New York), such temperatures are quite warm.

Where are the kids?

I didn’t see many children, or very young children. When I did see children, particularly babies, many people flocked around. I think I only saw one or two pregnant women. From what I was told, Italy’s population is in decline.

While I can’t exactly put my finger on it, Italians definitely seem to have a better sense of style than Americans. Clothing fit better on people, old buildings seemed to fit with new buildings, and even graffiti was more tasteful.

Of course, food is fantastic

Italian food is excellent. I especially liked Italian cheeses, coffee, and gelato. Ironically, I tried pizza four different times and I was not impressed, even when I was in Sicily. For the most part it tasted like simple bar food.

There is more than one Italy

Like many other countries, Italy is not really one cohesive country.

I had the impression that Italy was Italy. As my brother-in-law explained, however, northern Italy is more modern (e.g., faster pace) than southern Italy. Being in Sicily was like being in a different country. If you visited China or the United States, you’d definitely experience the same thing. It is easy to fall prey to the “one country myth” until you visit.

Efficiency: Italy, you can do better!

I don’t think that Italy is nearly as efficient as it could be. I wasn’t impressed with Italy’s transportation, grocery stores, or construction. This doesn’t mean that Italy is slow or behind-the-times, but I saw room for process and system improvement repeatedly.

Italians tend to eat later than Americans. It was not odd to eat after 8:00 PM or even 9:00 PM. This was very common. Indeed, there were times when we could not eat at 6:00 PM because it was much too early. Speaking of eating, many businesses completely closed from about 12.30 through 15.30. Time to eat lunch and relax.

Many Italians, young and old, walk late at night. Walking was done both before and after dinner.

Religion is a big thing in the South

Sicilians are very religious. In virtually every business, we saw a crucifix. I swear it was almost impossible to walk more than a couple of hundred feet without seeing a church. (This is very much the same everywhere in the country, n.d.e).

In every hotel, small and large, we had to hand over our passports. A couple of times they took our passports and we had to return a couple hours later to pick them up. When I didn’t have my passport these times, I was worried but I didn’t have much recourse. I guess this kind of thing is pretty typical in Europe.

Several times we stopped in stores to get drinks and snacks. I quickly found out that the typical liquid container size is 1.5 liters. Everything from water to juice was in 1.5 liter containers. It was relatively convenient, but certainly different than the typical 2 liter bottles you find in the United States.

Despite what you might think, there are many variations of Italian. These dialects are so strong that even some people completely fluent in Italian cannot understand the language.

Beware of narrow streets (and people on scooters don’t care)

Almost every street in Italy is narrow. The older the place, the more narrow the street. In spite of this physical constraint, drivers drive quite fast. The folks on scooters have a blatant disregard for themselves and others, and they are quite happy to whip along at 30-40 MPH in very confined areas. In some ways, these scooter people remind me of the insane bike riders in New York City.

When you go to restaurants in Italy the tip is automatically calculated and added to the check. In most cases, this is very convenient and reduces confusion and errors. I’m not sure if this is more of a culture thing or some sort of law in Italy or Europe.

Don’t expect people to be on time

Italians care less about time and keeping time than Americans. First, there are definitely fewer clocks. There are plenty of watches, but watches act more as jewelry than timekeepers. Second, there is less emphasis on time itself. It is harder to grasp, describe, and explain. There were times when we couldn’t explain that we needed more time, or that we were going to miss something on our schedule due to time constraints. Third, there were a couple of times where places were just mysteriously closed, with no reason given. Finally, most businesses didn’t post their open and closed hours, as if it really didn’t matter.

The size of the Roman Empire

I learned that the Roman empire was huge. Really huge.

As we traveled around Sicily, Rome and Bologna, I never felt threatened or worried. I expected to feel uneasy partly because of the war in Iraq and partly because I would obviously be a foreigner. That was not the case. Although the people aren’t necessarily always warm and fuzzy, they aren’t full of angst or feelings of anger. I felt safe enough.

Germans love to vacation in Italy, especially Sicily. My brother-in-law told me that there seems to be a love-hate relationship between Germans and Italians. We saw many Germans and they stuck out, almost as much as the Americans.

There seems to be an insane level of specialization in Italy, especially in the little shops in the cities. For example, I saw a shop selling only drapery rods and another store selling only white nurse uniforms.

I experienced a high level of interpersonal quid pro quo in Italy. Here’s an example. We needed a corkscrew for some wine so I borrowed one from a hotel clerk. As a small token of my appreciation, I took some of the wine to the clerk. He acted like he completely expected the wine. In the United States, such a gesture would not be seen as an equal exchange, it would be more like a gift. I was reminded of the Chinese concept of guanxi.

Sex and the country

Italian advertising uses more sex, but it is surprisingly tasteful.

When waiting for things in Italy, lines rarely form. Instead, people mob around things and squeeze in over time. There seems to be less of a need to be first, or win, or beat the next person behind you. There is an air about people that is more casual and collected. People seem to expect to wait; lines almost seem to be distasteful, unless the situation is more international (e.g., airport).

Most Italians assume that Americans can’t speak Italian. They are very pleased when they can speak the native language. It was so good to be with my brother-in-law since he speaks Italian fluently.

The sphere of personal space in Italy is quite smaller than in the United States. Americans love their space, but Italians care much less about it. I bumped into hundreds of people, and they bumped into me. They didn’t mind, and I just learned to ignore it.

Italians seem to read more than Americans. There were newspapers and magazines all over the place, and people were reading all of the time.

The part about dialects in this blog is misleading. Sure,there are many.many regional dialects in Italy, and any are very unique, strange and virtually incomprehensible to outsiders. However, standard Italian is the national language and everyone speaks it. Dialects are only used in the towns where they originated and among family and townspeople only. Compulsory education came to Italy under Mussolini’s Fascist rule in the 1930’s, when the country was largely illiterate,especially in the South. Today,the nation is 99.5% literate and if you can speak standard Italian…everyone will understand you from North to South and Sicily.