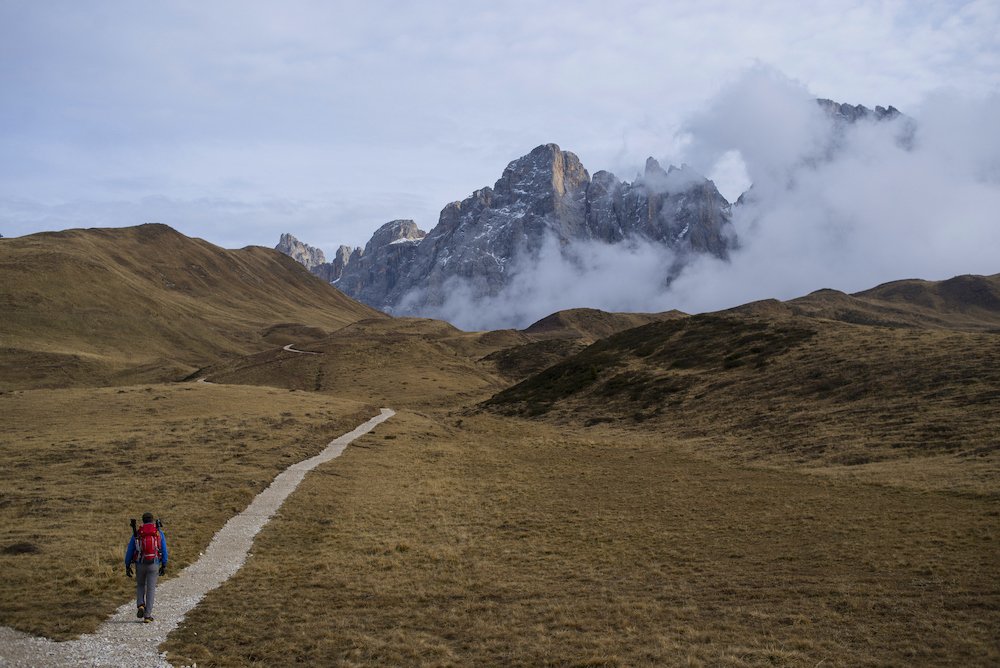 The Longest Trekking Trail in the World

Did you know that the longest trekking trail in the world belongs to Italy? The Sentiero Italia is the amazing path that, starting from the North Eastern Italian Alps, joins together the Alps and the Apennines, creating a 6000 km long walk immersed in nature, history and beauty. After years of abandon and neglect, the Sentiero has been finally discovered once more and it’s ready to be walked and loved again.

The Trail and its Amazing Wealth of Beauty

A wealth of 6880 km, across 20 regions, 655 passes, 360 villages, towns and hamlets and 6 UNESCO Natural Sites, all divided in 368 legs, their higher point at 3098 metres above sea level. Giancarlo Corbellini, famous Italian explorer, geographer and mountaineer, says it is ” the longest high route in the world.”

And, considering its already mentioned length, that shouldn’t come as a surprise: 6166 km, just about the length of the Earth radius, in a country formed in its quasi-entirety by hills and mountains, and characterized by an incredibly unique biodiversity.

The Sentiero Italia and its History

The trekking trail is the brainchild of the Associazione Sentiero Italia, which conceived it as a way to bring attention and value to Italy’s mountain landscape and its communities. It took 12 years, from 1983 to 1995, to develop the project properly: an immense work, all on the shoulders of a group of mountain lovers and volunteers of CAI, the Club Alpino Italiano (The Italian Alpine Club) and some sponsors.

Riccardo Carnovalini, famous figure of the Italian trekking panorama and one of the Sentiero Italia founders, explains its origins and relevance: “the idea was born about 35 years ago in Castelnuovo Garfagnana, in Tuscany. It was 1983 and we were all taking part to a conference dedicated to the inauguration of the Grande Attraversata Appenninica (GEA). That’s when we ended up talking about this dream we had: joining together all of our mountains, the Alps and the Apennines, with one single trekking path. And then, a few years later, the right partner for such a project came forward, the Club Alpino Italiano, of course. “

Dreamers, some may have thought at the beginning. But their project had such potential and was of such value and importance.

Because at the heart of the Sentiero wasn’t the idea to attract mass tourism and connect one famous location to another, but rather that of bringing relevance and new interest to the incredible variety of our Alps and Apennines’ landscapes and heritage. “We didn’t choose the most famous centers of Italy on purpose. We decided to follow a path through the so called “Italia Minore,” a lesser known Italy,” specifies Teresio Valsesia, mountaineer and author.

Morphologically speaking, Italy is a peculiar country, extended as it is in length. “A mosaic of many Italies,” says Valsesia, “varied natures and cultures, from the Mediterranean to that of central Europe.”

It touches upon all of our regions, from Mount Etna to the Gran Paradiso, from the Pollino to the Marmolada and the Gran Sasso. It is, indeed, impossible to find another trekking path, anywhere in the world, with the same variety of landscapes. Even the CNN, in 2015, took an interest in the Sentiero Italia, defining it “the most incredible among all trekking walks, thanks to its length and its unequalled variety of peaks, villages and landscapes.”

The importance of the Sentiero lies just here: in how it represents Italy in all its variety and beauty, giving trekkers the opportunity to discover a lesser known, but very authentic side of the country.

The Sentiero Italia was inaugurated in 1995 with the CamminaItalia initiative, which was repeated in 1999. After that, though, the oblivion. People lost interest and walks were no longer organised: the Sentiero was ultimately abandoned and neglected.

Very little sign of the Sentiero remained until last year, when the president of CAI Vincenzo Torti openly expressed his desire to see the trekking path re-established: the deadline to see the Sentiero Italia back to its former glory was Spring 2019.

Giacomo Riccobono, Yuri Basilicò and Sara Furlanetto are the founders of this amazing project. One year before Torti brought up the importance of the Sentiero Italia, the three young mountaineers had already started the Va’Sentiero project. Today, also thanks to the support and work of CAI, which took upon the duty of making the path walkable again, the people of Va’ Sentiero can announce the first Sentiero Italia trek in 20 years. To be faithful to the truth, some people, especially from other countries, did trek part of the Sentiero during this time, and recently Lorenzo Franco Santin, walked it in its entirety, documenting its adventure. However nothing official happened in relation to the trail since 1999.

The adventure is kicking off this Spring. It will take to the group 9 months to complete the trek in its entirety. Sara Furlanetto, who is a photographer, will document the experience, along with a cameraman and, of course, whoever will like to join them, even just for a short while. The Va’ Sentiero initiative is open to everyone.

All relevant information about the project, including the legs of the itinerary and their difficulty, GPS data, and maps, will be uploaded on the project’s website.

Va’ Sentiero and the Year of Slow Tourism

The Va’ Sentiero Project and the new opening of the Sentiero Italia is part of the 2019 Anno Nazionale del Turismo Lento, or slow tourism, a way to discover the country based on beautiful landscapes, nature, reflection and, well, some good old sweat.

Cycling, walking, horse riding: these are the ways slow tourists travel, following the rhythms of nature.

A new and, at once, ancestral manner to experience the country. And this is all thanks to the Sentiero Italia, the Va’ Sentiero Project, CAI and all those people who, in these 20 years of neglect, never quite forgot the beauty of a trail that holds within all the essence of a country.

If you’d like to keep in touch with the Va’Sentiero project, you can join their Facebook and Instagram pages, as well as their Newsletter, where all relevant news about the trek will be posted. A crowdfunding initiative, accompanied by a walk (15 February- 31 March) will soon be announced, along with all the details necessary to support this great project.

Hello! I am a norwegian 67 years old man, and lover of Italy. I have travelled a lot all over Italy, also on foot.
In June -19 I tried to walk Sentiero Sardegna, but I soon found out that this route as found on map in Internet is not possible to rely on. I will specify in later e-post

Hello! I am a norwegian 67 years old man, and lover of Italy. I have travelled a lot all over Italy, also on foot.
In June -19 I tried to walk Sentiero Sardegna, but I soon found out that this route as found on map in Internet is not possible to rely on. 1)You have no appointment with the farmers to pass their land. I met a lot of closed gates and I did not feel welcome. 2) Many paths over hills and in the forest is impossible to pass because of overgrowth of bushes and spines. 3) The road to Diga dello Lago del Liscia is closed to all traffic. I climbed high gates with photo-survey and I felt like a criminal to cross them.
You must walk all the distance yourself and get in contact with all the farmers and landowners! As it is now they feel – and are right I suppose- that this sentiero is pushed upon them without their knowing and accept.