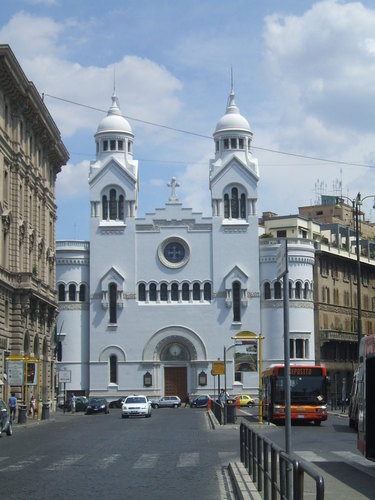 Only two types of wedding ceremonies are  legally binding in Italy: Catholic weddings and civil ceremonies. Yet,  Protestants and non-Catholics of any type need not despair, as it is still a pleasure to marry in Italy having a religious ceremony. However, if you want it to be legally binding, you should have also have a civil ceremony, either at home, or in Italy. For this latter option, make sure you read our “how to” article linked above to get some hints about it.

A Protestant Wedding in Italy

Once again, a Protestant ceremony is not legally binding in Italy, so if you opt for one, you must think of a civil ceremony, too. It is up to you whether to celebrate it back home in the US or hit the wedding jackpot and just celebrate two ceremonies in Italy. Per se, a Protestant ceremony is not very difficult to organize and most of the leg work will be done by your wedding planner, in case you decide to hire one. However, there are a couple of things you may like to keep in mind.

If you want your Protestant wedding to be legally accepted, you will need get married with a civil ceremony beforehand and bring proof of it, in the form of a marriage certificate, to the pastor. In some cases, you may be able to celebrate both ceremonies at once, but you should discuss this with the pastor you chose to marry you, or ask your wedding planner to sort this option out.

The Protestant Church is characterized by its many denominations, but this won’t be a problem, provided you and your partner are baptized Christians. If one – or both – of you isn’t, you may like to discuss with your wedding planner and the pastor how to move. Once again, this shouldn’t create many issues, because we’re talking about a Matrimonial blessing and not about a legal ceremony. You may wonder why this is so different from the way it works for a Catholic wedding: well, for Catholics, marriage is a Sacrament (just as Baptism, or the First Holy Communion), but it isn’t for the Protestants. This means that regulations are not as strict.

When it comes to location, a Protestant ceremony in Italy will give you plenty of choice. Churches are always an option: even if Protestant churches (of whichever denomination) are not as many as Catholics, there are still plenty to choose from, especially in larger cities such as Rome and Florence. The Italian Riviera may be an option, too, as it used to be a favored holiday destination of aristocratic Victorian Britain.

However, one of the main pros of having a Protestant wedding is its flexibility when it comes to location: a Catholic wedding has to be celebrated in a Church, but a Protestant one, as it is only a blessing, can be carried out everywhere you like. In come the options, so: a beach wedding, a countryside wedding, a palatial wedding, you name it. As far as the place is free – and affordable! – you can have it.

In case you’re Church of England, the same considerations can be made, even though speaking with the anglican priest who’ll celebrate your wedding may be a good idea, as some restrictions may apply, depending on the parish and its location.

Just as for the Protestant, Orthodox wedding ceremonies (Greek, Russian or any other Orthodox denomination) are not legally valid, so you’ll need to get married with a civil ceremony first. Specific requirements may change from church to church, just as it happens for Anglican weddings, to the best bet is to choose your church, contact directly those in charge and discuss all the details with them. As it happens for Protestant ceremonies, you’ll need to be baptized and/or chrismated: make sure you’ll discuss this with the celebrant  well in advance, so that you’ll have time enough to request and produce all certificates. If you were married before, you’ll need to produce a religious annullment decree, a civil divorce document or, in case you lost your previous partner, his/her death certificate.

Jewish ceremonies in Italy can be celebrated either in a Synagogue or at an external location of your choice. They are legally recognized, so there is no need to get a second, civil ceremony. Italian Jewish communities are Orthodox, but rabbis are usually happy to marry you, provided an Orthodox rabbi from home certifies you belong to the Jewish faith. You’ll need to provide a series of documents: first of all, a declaration, provided by an Orthodox rabbi, that you and your partner do belong to a Jewish community. You’ll also need a second certificate, issued by a Beth-Din, stating that, in accordance to the alacha, there are no impediments to the marriage. You’ll need to provide also your and your parents’ Hebrew names.

Because a Jewish ceremony has also legal and civil value, you’ll need to submit all documentation needed for civil ceremonies, too. Meeting the rabbi prior to the wedding is essential so that the couple can become aware and acquainted with the traditions typical of the community they’ ll marry into.