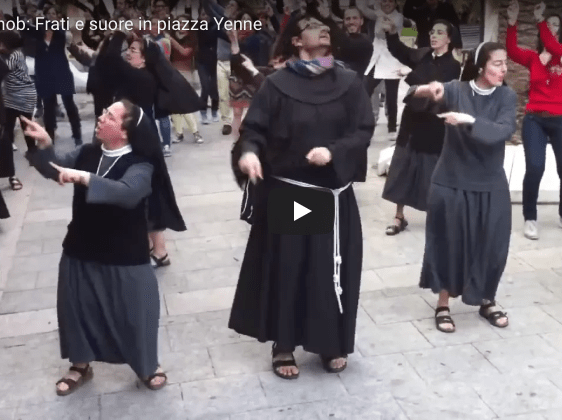 Who says that religion is outdated?

It seems the Order of Friar Minors of San Francesco Stimmatizzato have taken their new pastoral mission in stride, ending up being a mediatic sensation while at it.

Last Sunday a group of Franciscans, along with young members of the diocese of Florence, have entertained passerbys and onlookers with a modern dance at the bouncy rhythm of techno music. The video became viral quickly, with thousands of views and hundreds of shares. In order to make the message even clearer, the young Franciscans protagonists of the video, which is part of their new effort to bring Faith to people in a more accessible way, also created an hashtag, #Liberiperamare (free in order to love).

The message is especially addressed to younger people, in the hope to make them more sensible to Faith and help them decide whether they want to find a place for it in their lives.

This is not the first time the Franciscans have used music and dancing as a way to attract attention to their message and to Faith in general, and their performances have been welcomed by opposite opinions: some find it spectacular and useful to bring people to the Church, others on the contrary see it as highly inappropriate. You can make up your own mind by watching the latest video from Florence here. We propose you another, earlier performance from Piazza Yenne in Cagliari… If you dig the genre, there are plenty of videos just like that on youtube!