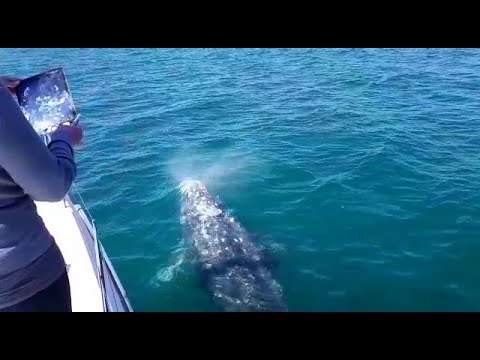 From the Pacific Ocean to the Italian coast, Wally is friendly and gorgeous. And mysterious.

The balena Wally, a grey whale, has been greeting visitors, going on tours in Italy, and puzzled many researchers. And she’s still a mystery.

Scientist still don’t know a lot about her. Wally appeared in the Mediterranean at the beginning of April 2021. She had started her journey in the Pacific Ocean. Researchers believe she is around one years old, hence a young whale.

The Tethys Institute and the Italian Guard Coast have been tracking the balena and studying her. Thanks to a drone, they calculated that Wally is almost eight meter long, or 26 feet. Always through the video footage, scientist realized that the balena is malnourished, exhausted from her journey.

”During this season,” Airoldi said, “she has an urgent need of food. And we hope she can feed herself in our waters, unknown to her. Hence, no one can cause it stress.”

There are two theories on Wally’s adventure. In fact, grey whale usually live in the Pacific. Indeed, she is far from home. One theory is that this whale can actually come from the Atlantic and represent a species that was once extinct in that ocean. Or Wally might be older than one. Hence, she would have had the time to migrate from the Pacific and crossing the Arctic.

For now, it seems like this grey whale is swimming its way to France, while (hopefully) enjoying the coast of Liguria. Indeed, a little adventurer with tons of courage.