In Italy, September is still part of tourist season. In many areas of the country, such as Tuscany for instance, it is in fact still considered high season. In September, locals come back from their annual August holidays, so traffic in large towns and cities is back to usual levels. The weather gets a little cooler, but the climate is still warm and pleasant. There are still food festivals and small art and music gatherings all over the country, even though not as frequent as in the summer months.

Visitors would generally find accomodation rates to be a little lower than the preceding months, so September is a smart choice if you are conscious about your budget

September is a great month to visit Italy also in name of its weather. In September, temperatures begin to drop all over the country, but remain largely warm and enjoyable. Also, the weather in most parts of the country is usually dry, which is an added advantage. September is a great month for outdoor activities in Italy, since the temperatures are not too high but not cold, and seaside resorts are less crowded.

Autumn begins in Italy officially on the 21st of September.

As mentioned, the month still offers interesting cultural events across the country, including the very well known Regata in the Gran Canal of Venice.

Northern Italy is, comparatively, much cooler in September than in August. In Milan and other parts of the North, the average temperature would remain between 12 to 24 degrees Celsius (54 to 75 degree Fahrenheit). Occasional rainy days may cause the temperatures to drop a little, but without fear of the air getting too cold.

In Central Italy, including cities like Rome, the temperature climbs down by a notch. Average temperature is approximately between 17 to 26 degrees Celsius (62 to 79 degree Fahrenheit). Just as for the North, Central Italy is also prone to get occasional rain, so it is a good idea to pack a small umbrella in your travel bag!

Also in Southern Italy and seaside resorts, including Sicily, temperatures slightly drop, remaining between 22 to 27 degrees Celsius (72 to 80 degrees Fahrenheit). The climate is usually dry.

Where to Visit in September

To Italians, September is the month when holidays end and everything goes back to the usual routine after the sun and fun of the summer months. For this reason, most places are less crowded and easier to enjoy. Beaches and seaside areas are still blessed by pleasantly warm temperatures, but without the bustle of July and August.

If you are more of an art and history lover, September may be the best month to go around and enjoy the many options the country has to offer. The beautiful archaeological sites of Rome, for instance, are better visited in a slightly cooler climate, rather than the almost unbearable city summer heat that hits the capital from May to August. The Foro Romano, in Rome city centre, or Ostia Antica, near Rome, are only some of the magnificent places to see during your September Italian holiday.

Pompeii and Herculaneum can also get too hot during Summer, so September might be a better option.

We said that, on average, September is a less active month than July and August when it comes to festivals and traditional events; yet, this does not mean you will not find something interesting and beautiful to do. If you come to Italy in September, you should check some of these out:

The Palio di San Rocco takes place at Figline Valdarno, in Tuscany, during the first week of the month. The festival is said to be among one of the first ever races created in the region. The event includes five days of celebrations revolving around horse races, and archery and jousting competitions.

The Tocatì, the International Festival of Street Games in Verona, is an interesting opportunity to check out games, sounds and flavors of the past.

The Ferrara Baloons Festival is the most important baloons event in Italy. You have the chance to fly over Ferrara!

In Greve in Chianti (one hour drive from Florence) there’s the Expo del Chianti Classico. There’s music, there are lessons on how to taste wine, food sampling and, most important, wine tasting: you are given one glass and you can taste up to 8 different wines (there will be around 60 wine producers!) for 10 euro or so (at least it was like this in past editions, I couldn’t find any confirmation for 2019). In 2019 the event will be from the 5th to the 8th of September.

The MITO music festival takes place in September in the cities of Milan and Turin, and lasts throughout the month. It is a fantastic occasion to enjoy great music (of all kinds), while exploring these two amazing cities. 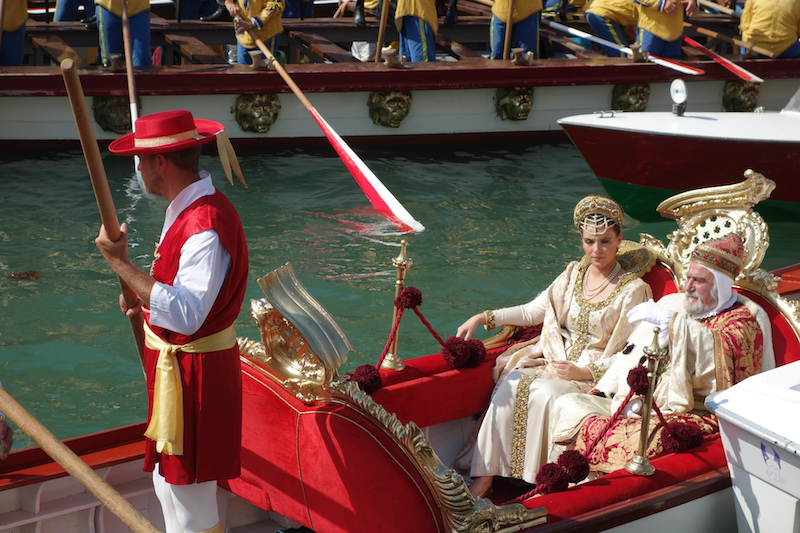 The already mentioned Regata Storica di Venezia is one of the most important September festivals of the country. It takes place on the first Sunday of the month and sees several categories compeeting to win its prestigious races including, beside Man and Women, also a Children category. All is introduced by a colourful, traditional parade that takes place in the small, characteristic streets of the town.

Another important and quite large September festival takes place in Viterbo, on the third day of the month: it is the Macchina di Santa Rosa, a beautiful procession where participants wear ancient costumes and carry on their shoulders a lighted tower, called macchina, surmounted by a statue of St Rosa, the patron saint of Viterbo. Thirty meters high and weighting in at about 5 tons, the macchina is carried throughout the town by 100 porters.

San Vito’s day is celebrated in Ciminna, in the province of Palermo, during the first week of the month. There is a large parade where scenes from the life of the Saint are re-enacted. Along with the other celebrations, a livestock fair is also organized.

In Cordovado, a Rievocazione Storica takes place. The festival is quite interesting, since a 1571 noble wedding is recreated. The events include a large procession, along with various tournaments and archery competitions where the locals participate.

In Misterbianco, in Sicily, the festival of the Virgin of the Sick is celebrated in the second Sunday of the month. In 1669, when Mount Etna erupted, the sanctuary had been miraculously saved from destruction: the festival celebrated that miracle. Events are spread out over five days.

One of the oldest September festivals takes place in one of Italy’s best known and most beautiful cities, Florence. We are talking about the Feast of the Rificolona. Many outdoor events animate the town on the 6th and 7th of September every year, including a large fair and a procession starting from Piazza Santa Croce, led by the Cardinal of Florence, which marks the end of the celebrations. This feast is also observed in other parts of Tuscany.

The Festival of the Virgin of the Sea takes place in Patti, a small village in Sicily, on the second weekend of the month. A golden statue of the Madonna is carried in the procession to the sea. The statue is then placed in a decorated and illuminated boat for the boat procession. Later there is lots of food and wine, music and dancing.

In Sardinia, Dorgali town celebrates the feast of its patron saints for eight days. Saints Cipriano and Cornelio are the patron saints of the town and the celebrations include parades with medieval costumes, traditional dances, food and wine.

In Dozza, every odd-numbered year, the Festival of Painted Walls  (Il Festival del Muro Dipinto) takes place. In this occasion, artists from all over the world come to this medieval village near Bologna, to paint the walls of its buildings.

Last, but certainly not least, come the celebrations for San Gennaro in Naples, on the 19th of September. The event revolves around the religious ritual of the liquefaction of Saint Januarius’ blood, and it is rightly considered the most important festival of Naples, as well as one of the most characteristic of the entire country.

Celebrations include a large feast with traditional specialty foods and lots of wine, along with music and dancing.

Certainly a month rich in events, September in Italy.