The destruction of the Campo Santo in Pisa brought tears to Deane Keller’s eyes. Pieces of the famous frescoes lay on the floor and the roof had been torn off by Allied bombing. Painstakingly, he started picking up fragments of the frescoes and deciding how the restoration work should be carried out.

Deane Keller, who had studied art in Italy, was one of the monuments men who helped to save and restore Italian art during World War Two after the Allies landed in the country. These courageous men and women worked with Italian government ministers and museum curators, saving art from German looting or damage from bombing. This small force of soldiers often did this while enduring grave danger to their lives.

As the war swept through Europe, the Allied government leaders grew increasingly concerned about protecting the continent’s fine cultural heritage. The Monuments, Fine Arts, and Archives program was formed to protect and restore art and monuments. Composed of about 400 troops, the MFAA included art historians, curators, and architects. They aimed to put General Eisenhower’s words into action. He said in December, 1943:

“Today we are fighting in a country which has contributed a great deal to our cultural inheritance, a country rich in monuments which by their creation helped and now in their old age illustrate the growth of the civilization which is ours. We are bound to respect those monuments so far as war allows.”

The Allies, who landed in mainland Italy in September 1943 and had to fight a bitter battle up the Italian coast , made many mistakes at first by damaging important buildings and works of art. In Naples, for example, the Royal Palace, called the “Italian Versailles”, suffered extensive damage when it was bombarded by the Allies. It also became a canteen for British troops, which didn’t improve matters.

The bombing of Monte Cassino in 1944 destroyed a national treasure of Italy. This monastery was the site where St. Benedict wrote his famous Order. The destruction of this sacred place allowed the Germans to describe the Allies as “desecrators of European culture”. 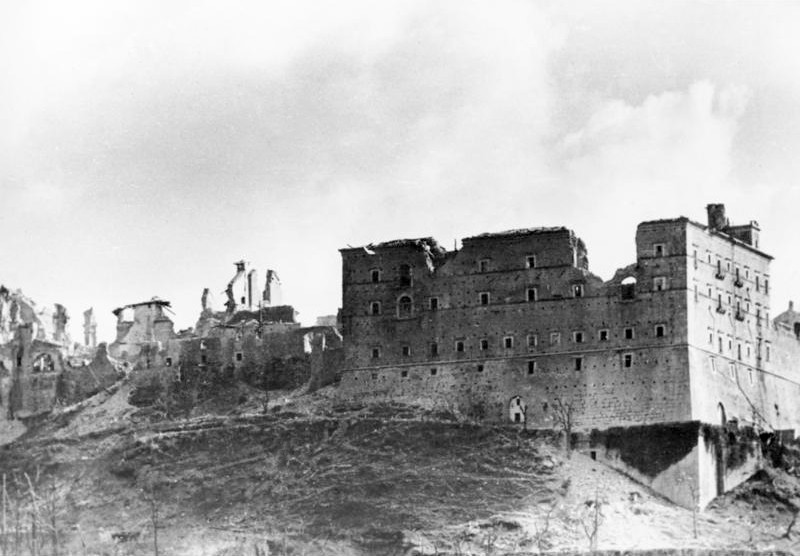 The Ovetari Chapel in Padua, which was an exquisite example of early Renaissance fresco painting in northern Italy, was wiped out by a cluster of Allied bombs in 1944. It contained beautiful paintings of saints and warriors by Mantegna. Frederick Hartt, one of the “monuments men”, cried when he saw the aerial images of the raid on Padua, soon after the disaster.

Captain Hartt’s discovery of Botticelli’s Primavera overjoyed him. The painting lay in the entrance of the castle of Montefugoni and almost greeted him when he worked as a monuments’ man in Florence. It was just one of many paintings hidden in the castle, including The Battle of San Romano and Velasquez’s portrait of Phillip IV.

The paintings, rushed away from the city to hide them from possible war damage, had been guarded by Cesare Fasola, the Uffizi librarian. He had stayed at Montefugoni since July 1944, when the Allies reached Florence; Fasola was alarmed to find that German soldiers had slept and cooked around the artworks, stacked pots and pans on altarpieces, and even used some of them as tables. He was so determined to guard the paintings from any further damage that he even went to bed fully dressed and managed to explain to any groups of soldiers he met, the significance of the paintings.

When Hartt arrived, Fasola left him in charge of the paintings. Hartt managed to obtain military guards for them as the war was desperately fought around the Renaissance city.

Hartt, a conscientious worker, completed many other tasks during his fraught time in Italy. For example, he checked and edited lists of monuments in Tuscan towns yet to be freed. He also worked hard on the restoration of the city of Florence, which was a “terrible story” in 1944: historic churches were severely damaged, bridges were destroyed, towers were falling, and windows were shattered. Much of the city was a war-torn mess. According to Ilaria Brey in The Venus-Fixers, Hartt took charge of buttressing walls, shoring up towers, and reconstituting the facades of the beleaguered city.

The only bridge in Florence which was not destroyed by the Germans was the Ponte Vecchio, but all of the bridges were rebuilt eventually, including the storied Ponte Santa Trinità. In the days after the Germans left Florence, the young Florentine sculptor Giovanni Mannucci dived into the Arno, which was filled with debris. He recovered fragments of the original stone from the bridge and pieces of the original statues. The Florentine Superintendency and the MFAA disassembled the moribund piers of the bridge: together with information from 19th century books, these pieces of the bridge provided the basis for its reconstruction.

It is hard to imagine these illustrious towns and cities damaged by war when I walk through them now. Try to think of Florence or Pisa as they were in 1944 and you will see just how much we owe to the MFAA and the courageous Italians who helped them.