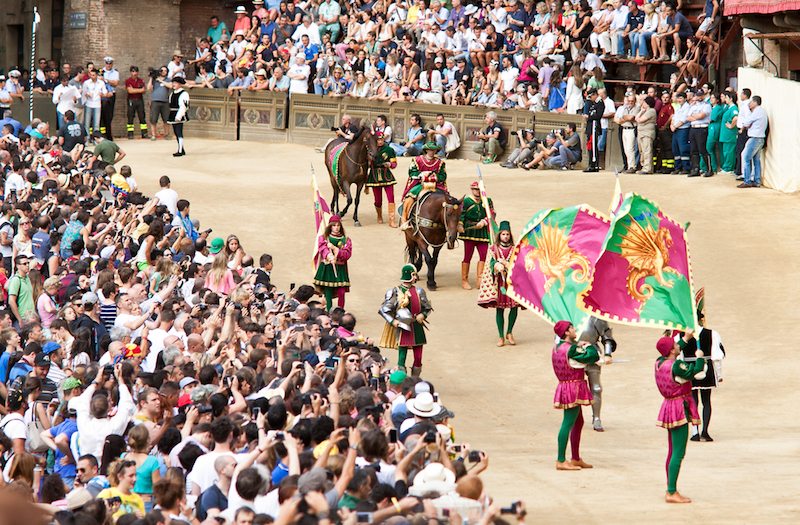 Turin, sometimes in the mid 2000s. One of my best friends had been dating this new guy for a while and she was eager for me to meet him. “He’s from Siena. His accent’s awesome!”.

Curiously contemplating the idea she was, in fact, going out with him because of her penchant for languages I, one evening, finally found myself sitting at her kitchen table sipping a home made Aperol Spritz with the two of them, waiting for dinner to be ready. Siena boy was, indeed, quite charming and -alas!- his accent the stuff of a linguist’s dream. While chatting away, I couldn’t help but notice a cute cuddly toy shaped like an owl sitting on the sofa: “why on earth did you get an owl?!” and as soon as words left my mouth, chill pervaded the room. Siena boy looked at me seriously and solemnly stated that it wasn’t “an” owl, but “the” owl symbol of his own contrada, la Civetta, one of the most antique in Siena. That’s when I discovered my friend’s new partner was a hardcore Palio follower and a very proud representative of his borough.

The solemnity with which he explained to me about the rules and nature of the Palio opened up a world before my very own eyes, a world made of history and rivalry going back almost 1000 years: what an amazing city, Siena, and what an amazing tradition the Palio is. If you think it’s a simple horse race tinted in the heavy hues of folklore you’d be seriosuly mistaken, because the Palio di Siena is, for its people, a reason of pride, joy, sorrow and endless diatribes. For the city, the Palio is also a theme running throughout history, that of history has always been mirror.

The one and only Palio di Siena. Often imitated, never equalled. Read on to know more about its origins and evolution and to understand how, still today, the whole city of Siena puts life on hold to honor it twice a year.

A History as long as that of the city

It’s hard to pinpoint the exact moment when the people of Siena began running the Palio, to the point the easiest way to put it is that the Palio was born with the city itself.

12th century documents bare witness to the presence of a race, run around the walls of the city and ending in modern Piazza del Campo, commonly known as “Palio alla Lunga,” that is, run on a lengthy course, rather than the round-shaped, repetitive version of today (more about it in a second). Those were years of enormous economic and cultural flourishing for the city, which took to honor its holy protector, the Virgin of Provenzano, celebrated on the 2nd of July, with the race.

These first, medieval editions of the Palio, in the 13th and 14th century, were an aristocratic affair: noblemen were all warriors and soldiers and the race was often used as a ritual representation of battles and military training. The contrade were more often than not involved in group games against one another, rather than in the horse race itself. Throughout the late Middle Ages and the Renaissance, the Palio maintained its aristocratic allure: it was, indeed, a popular social event, where the VIPs of the time wanted to see and be seen. However, it’s in this very period that the doors of the race were open to commoners; noblemen were no longer as keen on joining the army and the necessity to show to the world their military prowess had disappeared. Mercenaries fought the wars and jokeys, often selected among common citizens, ran the Palio instead of them. In these years, the Palio turned into the event we’re used to today. With the fall of the Republic of Siena, in 1559, the last vestiges of the military and political appeal of the event were lost. The Palio di Siena became pure entertainment: steeped in tradition, heartfelt by the population, but simple, pure entertainment.

It took one more century to establish the canonical dates for the races, the 2nd of July and the 16th of August. Up to 1701, the palio would take place to honor the Virgin of Provenzano, protector of the city, on the 2nd of July; that year, however, the winning Contrada dell’Oca proposed to run a second leg in August to celebrate the Assumption of Mary: as this is celebrated on the 15th of the month, the following day was picked for the race. In 1721, rules for the event were officially drafted to regulate dates and hours of the races, the type and entity of prices and all enrollement procedures. Uncommonly enough for any sort of legislation created in Italy, the Palio di Siena regulations are still the same today, almost 300 years later.

What about the contrade, you may ask. Saying “contrada” means saying “Siena” and “palio,” but when Violante Beatrice of Bavaria became governor of the city, in the early part of the first half of the 18th century, their number, borders and population were unclear. In 1729, she promulgated the Nuova Divisione dei Confini delle Contrade, an official document where all of the above were legally established: the 17 contrade Violante had recognized legally are still those forming the historical centre of Siena these days.

The 19th and the 20th centuries decreed the rise to stardom status of jokeys, a status they still enjoy today, at least among the people of Siena. The 1800s, in particular, were a time of treason: many famous jokeys including names deign of worship, passed from a contrada to another with the ease a child gets tired of a new toy. In the mid 19th century, Francesco Santini, aka Gobbo Saragiolo, ran for 15 contrade out of 17, winning for 7 of them. At the very beginning of the 20th century, history repeated itself, with Angelo Meloni, aka Picino (yes, all jokeys have a nickname and they are way better known by it than their real one) who equalled Gobbo Saragiolo’s record of having run for 15 contrade, himself winning 13 palii for 7 different ones.

Other mythical racers? Aceto, born Andrea Degortes, who dominated the Palio for 32 years, from 1964 to 1996, winning 14 of them; Trecciolino, christened Luigi Bruschelli, winner of 13 palii, 10 of them since the year 2000.

Beside understandable stops during the First and the Second World War, the Palio di Siena has been run without interruption, in its current form, since the 17th century. And its origin, we’ve learnt today, dates even further back in history.

The Palio is a flag: commonly known as “drappellone”, that is, large flag, it’s created each year by a different artist and kept by the winning contrada for ever, usually in the local museum.

When the Palio left Siena: indeed, it happened twice in the 1930s, and the fact Italy was a dictatorship then may explain why the proud people of Siena accepted such peculiarity. In 1930, it was run in Rome, to celebrate the marriage between Prince Umberto of Savoia – son of  the King, Vittorio Emanuele III – and Maria José of Belgium. Six years later, it took a shorter trip to Florence’s Giardino di Boboli where both Mussolini and Hitler were counted among its spectators. Speaking of historical figures of the time, the above mentioned Vittorio Emanuele III was keen on the Palio di Siena and often visited the city in its occasion, always privately, always without expecting any special honor. In 1937, however, all jokeys rose their whips to salute him, creating a ritual that remained in the palio tradition up to modern times.

It is the horse, not the jokey, that wins: yes. According to its regulations, the Palio di Siena is won by the horse that, with or without a riding jokey, is first to complete three full, clockwise laps of Piazza del Campo. If you ever saw the race, you may understand easily why: Piazza del Campo is not your typical olympic race track and falls and tumbles are extremely common.

Horses are blessed before the race: their blessing takes place in the afternoon of the race, in the contrada’s main church, where the parish priest bestows the holy aspersion to the words “go and win”.

The Palio della Pace: in 1945, the Palio di Siena became the Palio della Pace, to honor the end of the Second World War. In spite of the peaceful and honorable premise, that edition’s still remembered as one of the most out of control in recent decades, with the drappellone torn into pieces by members of the Contrada del Bruco.

It is considered the longest running horse race in the world: considering what we know about its centennial history, it comes as no surprise.