It’s hard not find cheese, on an Italian table, actually… it’s quite impossible! 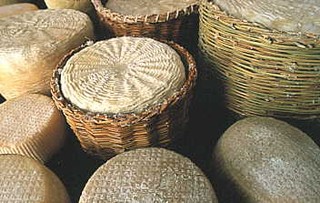 The typical cheese in the Castelli Romani area are the ‘Roman Pecorino’, ‘Roman Caciotta’, ‘Ricotta Romana’ and the ‘Canestrato’. All these cheeses are made, totally or partially, from sheep’s milk. Sheep, in Italian, is ‘pecora’. From here the name ‘pecorino’. The roman pecorino, its one of the most ancient cheese made, very famous and highly appreciated, in Italy and throughout the world. This cheese its entirely made of whole sheep milk, and has a typical aroma and a spicy flavor, giving a particular tasty flavor to first courses, especially on pastas.

The ‘Canestrato‘, it’s a direct derivate of the above mentioned pecorino cheese. His name derives from the fact that its made by being pressed into a ‘canestro’ – Italian word for wicker basket – of which pattern, will show on the cheese itself.

The Caciotta Romana is, usually, a fresh cheese, but it can also be sometimes seasoned, having a more marked flavor. This cheese presents itself quite compact, white in color, which can end up in a light straw-colored shade. One of the most popular cheeses, it sells over 30.000 Kg, it’s shaped as a cylinder, 7 Cm in height, from 1 to 3 Kg in weight. Excellent with ‘fave romanesche’ – roman broad beans – and over some pasta dish. Top of the line, thinly sliced on a nice, and rich, salad dish. One more hint: with potatoes or field mushrooms, makes an excellent, and light, second dish.

Mixed ‘Caciotta’, are made by mixing sheep and cow milk. They are tasty and spicy, typical of the Roman countryside. Its shape is low and round, not less than three kilos in weight.

The great demand is for the ‘Ricotta Romana‘ – Ricotta cheese – a firm, dry and compact cheese. Made from cow buffalo, sheep, goat and/or mixed cheeses.

Never the less these products of the Roman countryside, produced with modern technologies, still retain all the fragrance of the old times past, and those characteristics such as: being natural, high quality and, above all, nourishment.

Cheese has always been found on most popular tables, mainly used for fast snacks and, also, for long trips – dried – since it’s simple to make, it goes well with bread, wine and other local goodies. It’s a fast meal, complete and efficient and, above all… satisfying and filling! Can be preserved in a water solution, or spiced with thyme, pine seeds, and pepper. Excellent are the small ‘ricottine’ – same classic shape as a ricotta, but smaller – usually eaten with grilled bacon, porcini mushrooms and various salads.

Don’t miss these cheeses of you take a trip to the Castelli Romani… enjoy!