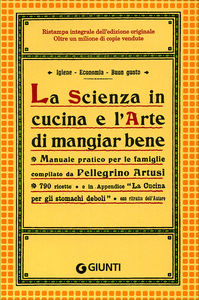 Italians are passionate about their food, and this love for all things scrumptious and delicious has permeated other cultures. Now many people wonder how to get their hands on original recipes of their favorite Italian dishes. The first problem is that there are no original recipes, because every region, city, and even family in Italy has their own version of popular dishes. Worse still for those looking for written recipes, Italians tend to pass theirs down by teaching and word of mouth. Most Italians will tell you that it is impossible to faithfully follow a recipe, instead you have to learn how much is the perfect amount by trial and error. Italians usually work by eye, or a occhio, and you will often be told to use a pugno or handful of something like salt rather than a standard measurement like a cup.

Still, if it is a written recipe you are after, there are a few recommended cookbooks offering great instructions to prepare typical Italian dishes.

The oldest and best known Italian cookbook is La Scienza in Cucina e l’Arte di Mangiar Bene (The Science of Cooking and the Art of Eating Well). The tome is best known as the Artusi, from the name of its author Pellegrino Artusi. Artusi collected 790 recipes from all regions of Italy, selecting the most traditional, and those actually prepared by housewives around the country. The first edition of the book is dated 1881 and it was the first collection of recipes written after the Unification of Italy. Written with a witty, friendly prose and using amusing anecdotes, Artusi’s book defined for the first time what dishes make up classic Italian cuisine. Socially the book was important because it was aimed at every strata of society in the newly unified country.

There have been over 111 editions of Artusi’s book up to now,  and it has been translated into the world’s major languages including English (below the link to the book available on Amazon).

Il Talismano della Felicità (The Talisman of Happiness) is another popular cooking manual. The book’s sales spike every spring, a season traditionally dedicated to marriages, as it continues to be a very popular wedding gift. Written by Ada Boni in 1929 and still in print, it is the first Italian cookbook specifically targeted to housewives. The 1,054 page tome is considered one of the defining recipe and cooking advice collections about Italian cuisine.

, translated by Matilda la Rosa and Mario Pei. The English translation has left out some recipes of not proven Italian origin and there are also additional recipes added, revised for American tastes.

(The Silver Spoon) is the newest among the classical cookbooks, yet it became almost immediately a milestone in the history of Italian cuisine. First published by the design magazine Domus, its first edition is dated 1950 and it contains about 2,000 recipes from all over Italy. Domus still publishes the book to this day both as a single volume and as a series of more agile shorter books dedicated to specific subjects like first courses, main courses, seasonal dishes and so on. The Silver Spoon is still considered one of the main references in Italian cooking.

The book has been translated into English several times with some modifications to the recipes to meet the taste of the country it is being sold in. The first English edition was heavily criticized for its sloppy translation and glaring errors in measuring conversions. In some recipes measurements were missing entirely. Following editions received more editorial care and were met with favor.

Along with these superclassical textbooks of Italian cuisine, we suggest a newer series that has taken into account the many changes and evolutions in taste and kitchen tools, as well as the availiability of ingredients. The Cuochi si diventa

(You Can Become a Cook) series, written by Italian food journalist and expert Allan Bay, are very practical guides to some of the best Italian dishes with simple recipes, quick preparations, and easy to find ingredients. The books are not available in English, but reading them is a fun way of improving your Italian, since Bay is a brilliant writer and fills his books with funny anecdotes and tips.Whichever guide you choose remember that Italian cooking is all about taste, experimentation and, most of all, love and passion.