Is cappuccino a drink or an epicurian fantasy? Surely the frothy concoction evokes images of whipped cream, lazy Roman afternoons, lusty Fellini films and balmy bistro nights even among the least imaginative among us. But where did this wonderful drink come from? Read and learn as you sip away.

The two years I spent in Italy in the 1970s marked in some ways the best times of my life. I was a student in a small Umbrian city, (Perugia, where they make all that wonderful candy that does all those not so wonderful things to your teeth, but who cares). There I learned more from living each day than I ever gleaned from any version of Dante’s Inferno and/ or Paradiso. The ways of the world are universal; the human element uniting all of us with a common thread. Italian men, however, represent a particular work in progress I shall call the Peacock Syndrome. I wish to acknowledge that this condition is often found in men of all ethnic backgrounds, persuasions and nationalities as well, but in smaller degrees. (Women, Italian and otherwise, have other problems). My point will be illustrated with a picture that hopefully will neither need one thousand words nor ignite the cosmopolitan masculine world against me.

I will never forget a February morning in Perugia when I spied from my warm perch a young Italian man sipping an expresso at a café on the town’s main street, Corso Vanucci. (Maybe it was really anti-freeze he was drinking. Who knows?) Anyway, it was a memorable sight because he was seated directly opposite me, but OUTSIDE, despite the freezing temperatures and chopping winds that ripped through the tablecloth. Still, the handsome devil wore no coat. His shirt was open down to his waist as if it were high August. Was he not the proud peacock showing off so that passing women could not fail to notice the multitude of virile hairs (peacock feathers) that had frozen upon his chest? That image has never left me and neither has my love for Italian culture and cappuccino; that frothy confection of milk and expresso topped with whipped cream and sprinkled with cinnamon!

My adventures in this charming city were not limited to Italian men, although I did experience la Dolce Vita in my own particular way. My sense of bad timing originated here where I tasted my first cappuccino some three weeks before I had to return to America. The latteria (dairy store) was hidden behind a small narrow street (calle) that I discovered one day completely by accident. To make things worse, it was the best cappuccino I ever tasted. The cream was scrumptious and I often had two or three cappuccinos in one sitting just to down some more of it. I even commented to a fellow student that I would have done just as well plastering the contents directly onto my hips and thighs instead of drinking it, as that was where it was headed anyway!

Where did this wonderful beverage come from? Coffee originated in the Ottoman Empire and was first introduced to the West by Italian traders. At first, Pope Clement VII was urged by his advisors to consider this favorite drink of infidels a threat. After he tasted it, however, he succumbed to a perogative that women have relied on for years: he changed his mind. Pope Clement actually baptized the delicious drink, making it an acceptable Christian beverage. 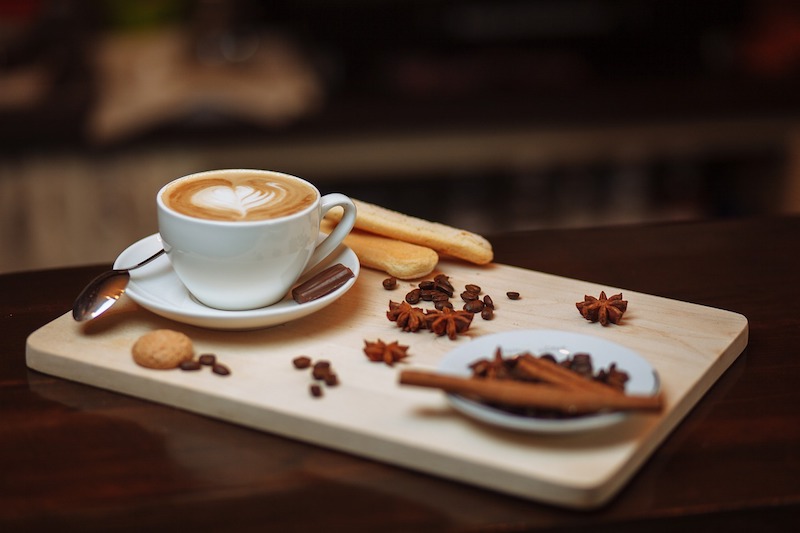 No one knows for sure exactly where cappuccino came from, but there are a few sneaky suspicions. The most popular belief is that the drink gets its name from the robes and cowl of The Capuchin Monk’s habit. How so, say you? Well, read on.

The Capuchin order of friars played an important role in restoring Catholicism to Reformation Europe. Its Italian name came from the long, pointed cowl or cappuccino, derived from capuccio, meaning hood. Capuchin was later used as the name (first recorded in English in 1785) for a type of monkey with a tuft of black cowl-like hair. The first use of the word cappuccino in English is recorded in 1948.

Whether or not this exquisite beverage was invented by the Capuchin monks is unknown. It is a fact however, that a properly prepared cappuccino of expresso and steamed milk leaves a brown ring along the rim of the cup much like the edge of the monk’s cowl. (Does this mean there is still hope for the ring around my bathtub to become famous?)

Have you ever wondered exactly how Cappuccino is made? Well, the basis for any cappuccino worth its salt (or grinds) is a strong blend of Expresso coffee with added milk or frothy cream topped with optional chocolate powder. The correct proportions are 1/3 expresso, 1/3 milk, 1/3 froth. To produce the froth, fill a small jug to 1/3 with fresh milk. Insert the expresso machine-frothing arm to just below the surface and turn on the steam, gradually lowering the jug but keeping the arm in place. Add half of the froth into the expresso coffee and sprinkle with cocoa powder or grated chocolate. Add the rest of the froth and top with more cocoa. (If you do it right, the process might never end.)

Cappuccino is more than just a coffee or a flavor or a process. Now one can find chocolate cappuccino cookies and even lollipops that can offer an authentic cappuccino experience even to toddlers! Whether you take the drink fancy or plain, with chocolate or just plain cocoa powder (Italians do not use cinnamon), cappuccino is a delight that should be enjoyed often. It is unique to the Italian culinary culture and cannot help but force even the most unimaginative among us to contemplate misty Roman afternoons and at least one balmy bistro night!

How to make cappuccino at home

Watch this video to learn how to make cappuccino at home:

You can find everything you need for the perfect cappuccino on Amazon.

P.S. Apparently some dictionaries accept the spelling “expresso”, while others consider it as an error. Go figure.

Some random thoughts and corrections:
“Expresso” is a non-existing word (at least in Italian and English). Espresso is the correct word.
“Capuccio” doesn’t exist either. It’s cappuccio. Fun fact: often it is used in Italy as a short way to order a cappuccino.
There isn’t and shouldn’t be any cream whatsoever in or near a cappuccino. Only frothed milk.
As you correctly noted, it’s very uncommon to have cinnamon on your cappuccino (at least in Italy).