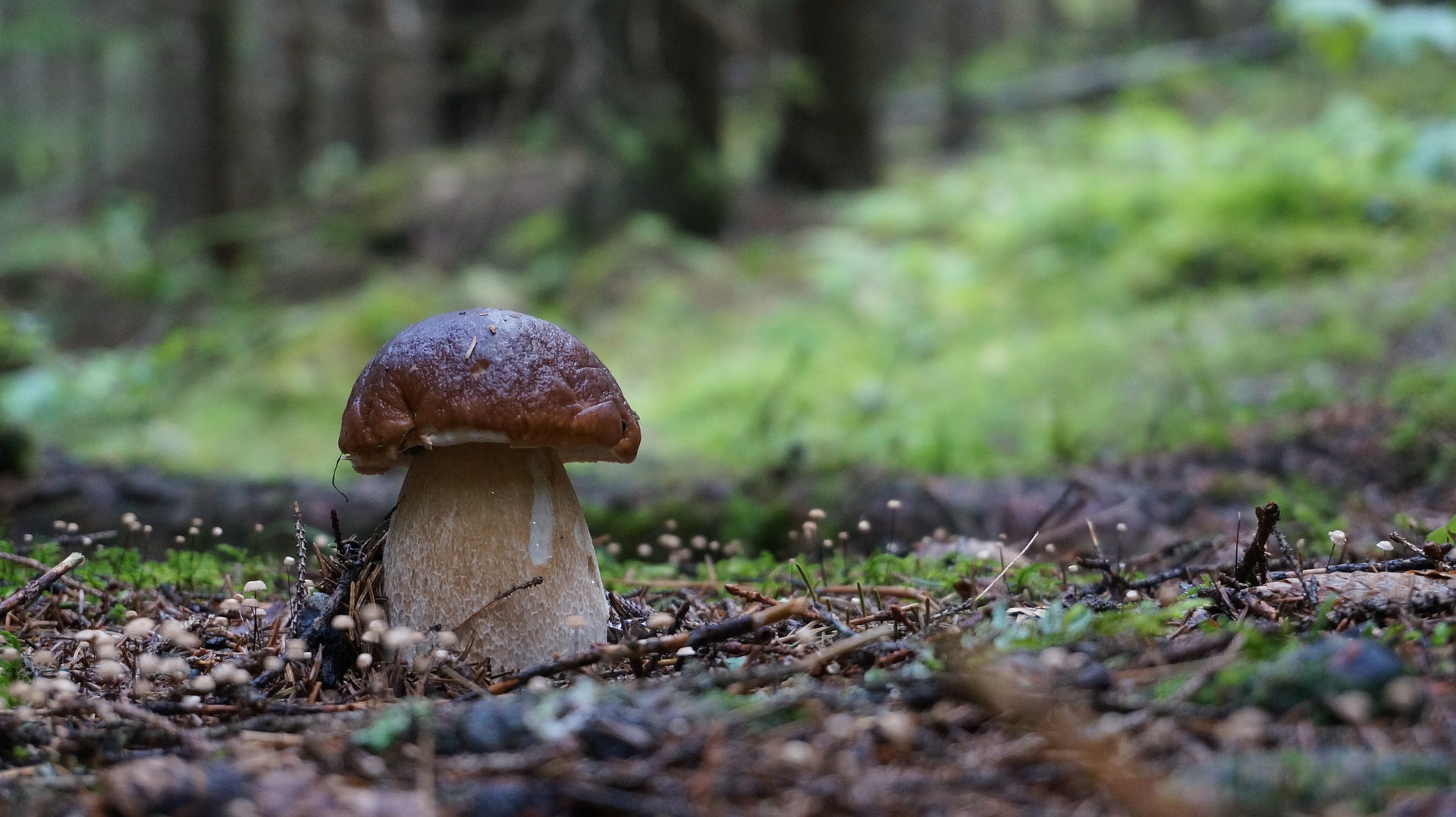 In the vast culinary world of edible mushrooms, only one can be called king. What Italians affectionately call porcini (piglets) is the ruling class of mushrooms. The meat-like texture of porcini, along with their earthy and somewhat nutty flavor, is unequaled among mushrooms and lends itself to countless dishes. Porcini can be found the world over, however American consumers have yet to fully utilize them in all their forms, being mostly seen in the US dried. Nevertheless, there is much more to porcini mushrooms than the dried bags found at the supermarket, and while dried porcini are excellent, the king of mushrooms deserves more respect.

Porcini belong to the boletus genus of mushrooms, characterized by a soft, meaty white body that does not change color after it is cut (boletus that change color to blue when cut or bruised should not be eaten). All porcini are boletus, but are all boletus porcini?

It is hard to say as mycologists (mushroom scientists) cannot agree on the finer points of the genus, therefore, porcini (or boletus) can take on a range of shapes and colors, but all grow under similar conditions. Porcini grow in association of specific trees and are considered mycorrihzal associates – in effect, porcini live in a symbiotic relationship with the trees they grow under. Many mushroom foragers find porcini living under pine trees, poking up through the dead needles, but it is well known that the best porcini are picked in chestnut woods. These are known for their light-colored hat and are best eaten fresh. As porcini gets older, their underhat turns a darker color. All species of porcini are characterized by a big, round, fleshy cap that is supported by a short round stalk.

There are several different types and qualities of porcini mushrooms. Boletus Edulis or Porcino D’ Autunno (Autumn Porcino) is one of the most sought after boletus species in the world. Referred to as the “King”, this porcino (called cep in France) is found in North America, Europe, and Asia. Fresh porcini of this species are sought after by mushroom hunters the world over and have recently started being exported out to Russia (known for its fanatical love of mushrooms) where they are known as Belyi Grib.

The Boletus Brisa is an Italian variety that grows mainly in the Apennines near Parma and in other mountain areas. Porcini with dark hats, known as Porcino Nero, grow in stands of beech or fir trees. They are suitable to be preserved, but are less tasty. The Porcino d’Estate or Boletus Reticulatus is found in the summer near evergreens, while Porcino del Freddo is found in colder areas.

Gathering wild porcini is still the preferred way of getting them, but is not suggested unless you are properly trained. California and New Mexico in the US are major hotspots for porcini gathering, with large harvests available in pine forests and mountain areas. In Italy, porcini are almost too popular, with gathering strictly regulated as boletus is becoming endangered from over-harvesting. A permit is required and a strict quota of two kilos per week is enforced. Porcini harvesters in Italy are also required to gather the mushrooms in open baskets to let spores escape and ensure the mushroom’s survival in the wild.

For the rest of us, finding fresh porcini may be difficult, but worth the hunt. Farmers are often seen selling porcini on the side or the road in Italy, but this is not as likely in the States. However, farmer co-ops may have them if they grow nearby, and good organic produce/ethnic markets may have them shipped in fresh, jarred or canned. The internet is a growing marketplace for many boletus species, with Russia and Asia being the leaders in exporting fresh varieties of porcini. Other forms of porcini products – dried or jarred in oil – are much easier to find, but fresh porcini are always superior.

When buying fresh porcini, carefully examine the mushroom for signs of age. If the undersides of the caps have a yellowish-brown tinge to them, the mushrooms are becoming over-ripe. Do not buy a porcino if it has a dark under-cap or black spots on it. Also look out for tiny holes in the stem, which is a sign of worms. If you do notice some signs of worms after purchasing them, stand the porcini on their caps for a time to allow the worms (they are harmless) to escape out of the stalk. Brush off any dirt you may find and wipe the mushrooms clean with a damp cloth. You can wash them in cold water if you want, but only if you plan to use them right away.

In Italy, fresh porcini mushrooms are preferred grilled and served with fresh olive oil and parsley. Often known as a “poor man’s steak”, grilled porcini are much more flavorful and satisfying than a grilled portobello – which after all is simply an overgrown crimini. Fresh porcini are also excellent fried, stewed with tomatoes (Porcini in Umido) or used as the base of a decadent pasta sauce or bruschetta topping.

In Italy, porcini that are not ideal for eating fresh are often jarred or canned in olive oil. The Porcino Nero, with its dark cap, as well as other porcini growing under fir trees make the most likely candidate for preserving. The oil preservation seems to make these lesser porcini much tastier than if they were used fresh. They all are extremely versatile, and can be used to replace both fresh or dried mushrooms in several recipes. When looking for porcini mushrooms jarred in oil, choose extra virgin olive oil and make sure the jar was not exposed to too much light. You may find local boletus species preserved in oil, and they are most likely very good, but may have a different flavor from Italian porcini due to the huge variety in the boletus genus, as well as possible variations in growing conditions.

Dried porcini are how most consumers got to know these mushrooms in supermarkets, but that is not to say they are bad. Dried porcini have a concentrated flavor and mushroom aroma that is excellent in risotto, soups, and sauces. To prepare dried porcini, cover them in boiling water and let them steep until they are reconstituted. After draining them, keep the steeping liquid. This liquid adds even more concentrated flavor to your recipe: just make sure you strain it first. When buying dried porcini look them over carefully. A bag of old, crumbly pieces and dust will be worthless. A strong mushroom aroma should greet you once opening the package: if the mushrooms have no smell, then they have no flavor either. Like fresh porcini, look over the package for signs of worms and do not buy them if there are pinholes in the mushrooms. Dried porcini should not be neglected, they may not be as versatile as fresh mushrooms, but their flavor can truly add a punch to many a recipe.

Besides the actual mushroom, there are several Porcini flavored products that are worth trying. Porcini-infused olive oils are excellent to drizzle on pasta, risotto or salads, but are too delicate to cook with. Porcini pastes and spreads can be found in gourmet stores or on the Internet and have an intense mushroom flavor that is ideal for antipasti. Whatever Porcini or Porcini product you decide on, you will soon grow accustomed to that exquisite flavor that seems to explode in your mouth. From a rich risotto, to a juicy “steak” to a flavorful oil drizzled on bread, Porcini never disappoint.

Hello Beverly! We do freeze porcinis, when we pick too many to eat in one time. Other types mushrooms can be frozen once cooked, but the porcini must be frozen fresh. Then you don’t have to wait until they are completely unfrozen to cook them, or they will become too soft. Just enough to be ablo to cut them in slices (about 5 minutes after you’ve taken them out of the freeze). So probably frozen porcinis are the best option (even though I’ve never bought them); canned porcini I don’t like, dried porcini are ok.

Hi Baverly. To be honest I never tried the frozen porcini. I am in Italy till the 24 of this month but when I return to the US I plan to order them and see if I taste the difference. Do you have an whee to order them? Thanks Paolo