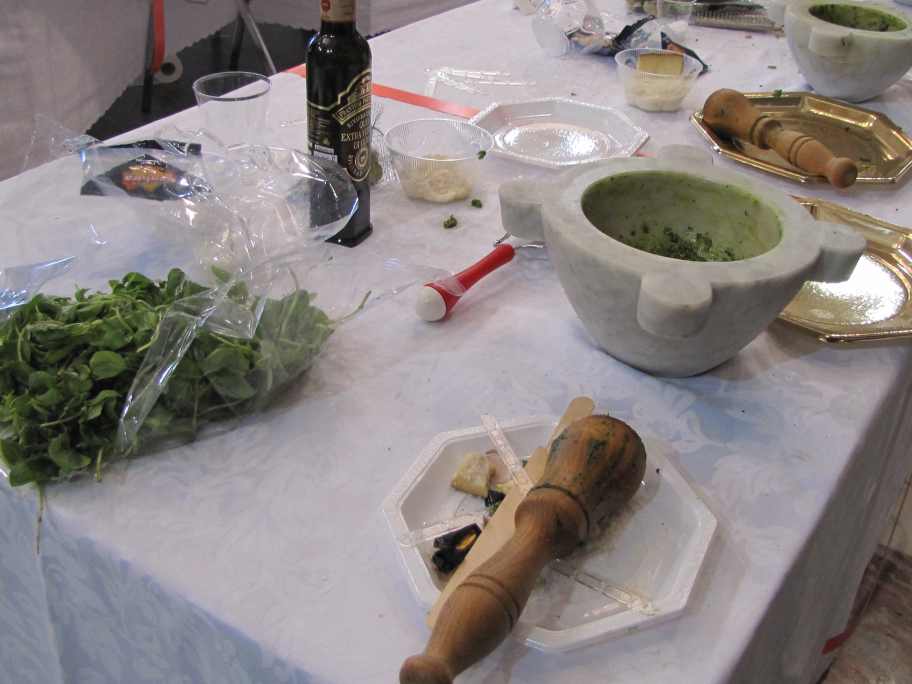 The Pesto World Championship: the competition

Every two years Genoa hosts the Pesto World Championship. In 2014, the competition reached its fifth edition and was a success from the point of view of public and number of participants. The latter are usually professional cooks and chefs as well as amateurs who compete by preparing pesto sauces using only authentic ingredients and traditional recipes. The pesto sauces were then judged by tasters ranging from restaurant owners and expert cooks, as well as food and wine journalists.

In Genoa’s historic Palazzo Ducale one hundred competitors from all over the world met to put their pestles and marble mortars to the test in order to gain the title of World Champion.The ingredients used to make the pesto are the same for everyone: basil from the Ligurian Coast, pine nuts from Pisa, garlic from Vessalico (Imperia), parmigiano reggiano, fiore sardo (a special cheese from Sardinia), salt from the salt pans in Trapani, EVO oil DOP Riviera Ligure.

The winner of the fifth edition of the competition, in 2014, was Alfonsina Trucco, 84 years old. In 2016 she couldn’t partecipate, her son did; but the winner was a 36 years old woman from Genoa, Alessandra Fasce.

The last four editions have been won by Italians, but in 2008 the winner was a Korean-American chef, Danny Bowien.

This event is a great time to visit Genova as the city incorporates the festival and pesto into many other initiatives and special promotions. For example, many restaurants in Genoa’s historic city center and along the Riviera offered menus with pesto-based dishes such as linguine al pesto and trofie al pesto at special rate, fixed prices.

Children are not forgotten during Genoa’s pesto craze, there is a non-challenging “Children’s Championship” Pesto Competition just for them!

During the competition of 2010, I had the honor of interviewing Roberto Panizza, the president of the cultural and gastronomic association Palati Fini, which organizes the Pesto Championship. During our conversation Signor Panizza revealed that the event was created to try to hand down the true tradition of the pesto recipe, prepared traditionally using a mortar, and the pesto culture, which has become a flag of Genoa in the world. Panizza’s mission and passion for his job mean that this pesto competition has been a dream come true for him and his team.

Did you know that pesto is now the second most popular sauce used for dressing pasta in the world? Below you can find the Official Pesto Recipe I used when participating in the Genoa Pesto World Championship.

Wash the basil leaves in cold water and dry them on a small kitchen towel without rubbing them.

In a mortar finely crush the garlic clove and pine nuts until they are smooth. Add a few grains of salt and the non-pressed basil leaves, then pound the mixture using a light circular movement of the pestle against the mortar sides. Repeat.

Add the Parmesan and the Fiore sardo cheeses when the basil drips bright green liquid. Pour in a thin layer of extra-virgin olive oil and mix.

Of course, this is not the only way to create pesto. In fact, every Genoese and Ligurian has their own secret to making their recipe extra special! Why not try creating your own pesto and discovering your own secrets and tricks?