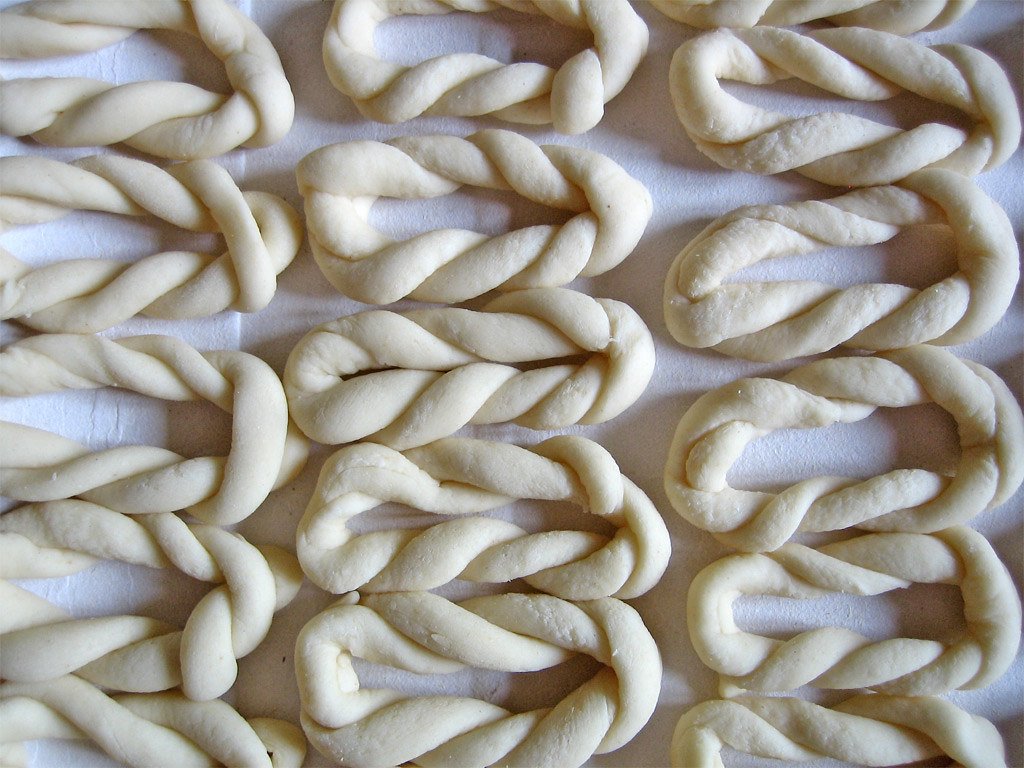 Italy loves its pasta and that’s certainly n stay a day without eating it: in your face, no carbs brigade.

Pasta also has a rather complex history. In school, we were taught Marco Polo brought it to us from China, but truth is a bit different and much more interesting than that.

It seems that the Romans already had a pasta dish, not dissimilar from our modern lasagne although they, of course, had no tomato sauce: that was to come much later, after Columbus crossed the Atlantic bringing back America’s pomodori and turning them into a national symbol.

When it comes to tradition and heritage, pasta also has a special place, because every region has its own shapes and varieties, matched with their own sauces, often tied to local produce, products and culinary influences.

There is a region of Italy, however, where pasta is also at the centre of century-old rituals, symbols of a past so distant it’s hard to imagine it, yet so bright and beloved, it still shines deep within its people’s eyes.

This region is Sardinia.

In Sardinia, there is a pasta only girls can make

Sardinia is a land of emerald seas and rough yet beautiful landscapes, a region where, more than in many others, history and culture developed independently from the rest of Italy.

Sardo, the island’s “dialect” is, in fact, considered a language in its own right, and for centuries the mysterious Nuragic civilization ruled over the region, resisting attacks and succumbing to the Romans well after all other Italic civilizations. We were well into the times of the Empire, when Rome managed to finally conquer Nuragic people.

This profound sense of independence and identitarian strength is not only typical of Sardinia’s language and history, but also of the way some of its traditional pasta shapes are made.

So traditional and identitarian, that sometimes they are made only within a specific village and only by women. This is the case of little lorighittas, a type of pasta entirely weaved by hand by the women of Morgongiori, a small village of 800, in the Oristano province.

Morgongiori is famous for its handmade tapestries and rugs, but the art of lorighittas is, if possible, even more special. They are made in the sinuous shape of a pleat, or of a delicate knot if you prefer, and they seem to date back to as early as the 16th century, when local women used to gather and make them together for All Saints’ Day.

Their recipe was simple, and still is: water, salt and durum wheat semolina, or trigu murru, to say it with the Sardinian themselves, were mixed together to create a firm dough that was then shaped like a little knot and placed to dry in large wicker baskets. The way women would place each little lorighittas next to one another would create a beautiful, lace-like patterns, a little work of art in itself.

Yesterday and today, lorighittas are traditionally made only by women. Of course, the original reason was, as it often is the case in rural cultures, related to the rhythms and necessities of nature: while men were out in the fields, women were leaders in the household. In Morgongiori, the toil and patience needed to make lorighittas meant they had become the duty of younger girls, hence the habit to say they were unmarried women’s job.

And still today, so many centuries later, these little knotty dough-ey morsels are mostly made by girls, a nice reminder of an ancient tradition kept alive within local families with pride. But boys, don’t you worry: if you fancy try making lorighittas, I am fairly sure you won’t be denied the opportunity!

Lorighittas are made, today, also in some local shops, so if you are around the Oristano province you may get lucky and be able to buy some. They are considered a true local treasure, so much so that Morgongiori’s Town Council created an EU-financed project, called Asso Lori, to protect the methods used to make lorighittas, as well as their producers.

But don’t forget: legends say that if you eat too many lorighittas, Maria the Witch will come and poke your belly with a skewer to let all the pasta out!

Sardinia is also home to a type of pasta born specifically to celebrate the holy worship of Saint Francis of Assisi, so precious even its name is witness to it: su filindeu translates as “threads of God.”

These thin, light, golden threads are reminiscent of another Sardinian treasure, byssus, an extremely rare silk-like fabric made with filaments produced by mollusks, the making of which is a tradition kept alive today only by a handful of people.

But also the making of su filindeu is a secret only shared by few. Three women, actually, all of them from the Nuoro area, all of them belonging to the same family, the Abrainis. This is not a coincidence, because the Abraini women have been making su filindeu for the best part of the past three centuries.

It all began in Lula, a small town near Nuoro. For centuries, its people have celebrated Saint Francis of Assisi, patron Saint of the village, twice a year: in October and in May. Many faithful would traditionally walk their way from Nuoro, some 20 and half miles away, to the village, an 8 hour trek through the hills, dedicated to prayer and meditation.

As praiseworthy and spiritually rewarding as it may be, all that walking left pilgrims famished and that’s why the women of Lula would prepare a earthy soup made with sheep broth and light, silk-like pasta, topped with lashings of pecorino sardo cheese: a su filindeu soup. This is how they are still served today, by the way.

If you are tempted, and would like to try them, then travel to Sardinia in October or May because they are made only and exclusively then. As a way to honor Saint Francis, of course, but also because making su filindeu is one difficult, time consuming challenge.

It can take a month to make 100 lbs of them, and the process is so difficult that not even world-known chef Jamie Oliver, who visited the Abrainis to learn about su filindeu, manage to make them.

Indeed so. Lorighittas and su filindeu are beautiful example of a past that still lives and that full communities have been trying to save from the passing of time. Testimony of a special heritage and history, they are also the result of incredible skills, of that saper fare, or know-how as we say in English, that is typical of Italian craftsmanship and cuisine.

It is important to speak, write, read about these realities, so we can, too, help keep them alive.