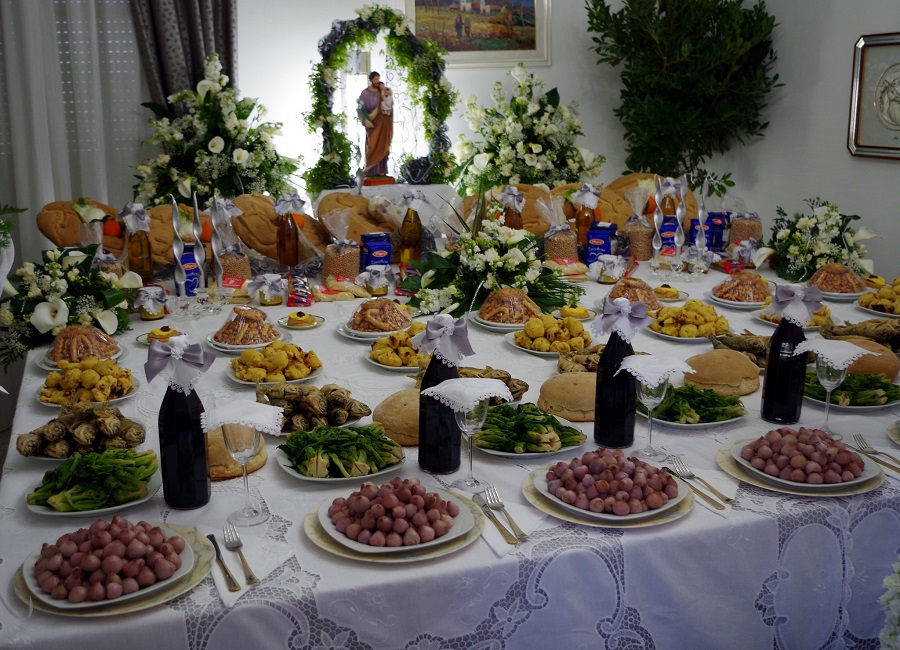 St. Patrick may get all the attention with the famous parades and green beer, but for some Italian Americans (including me) it means only two more days until St. Joseph’s Day. Growing up in an Italian American family, St. Joseph’s Day was always one of my favorite holidays: I could take the day off from school and all I had to do was visit relatives and eat! The tradition was brought over with the first immigrants and is still celebrated in both the old Italian American neighborhoods in the big cities and households nationwide. Every March 19, Italian Americans across the country will be sitting down to one of our favorite feasts.

Why We Celebrate St. Joseph’s Day

Even though St. Joseph played a prominent role in the early life of Jesus, He was not a highly venerated saint in much of Italy until the late middle ages. Today St. Joseph’s Day is celebrated all over the country, but more so in the south. The origins of the Italian American version of St. Joseph’s Day most likely date back to Medieval Sicily when the saint was said to have answered the people’s prayers by ending one of the island’s legendary droughts. Ever since, St. Joseph’s day has been celebrated with a large Lenten feast often served to the entire village (or multi-family meals here in Italian American communities) and an elaborate altar dedicated to the saint.

The altar tradition plays a major role in the veneration of St. Joseph and is the focus of the novena (nine days of prayer) before the actual feast day. The altars take on many shapes, some forming a cross while others occupy a corner table or an entire wall. Most of these altars are broken down before or shortly after the dinner, but I recall growing up that some altars became permanent displays. These permanent altars however, became overgrown with statues and crosses, flowers, oranges and lemons during St. Joseph’s Day. Other decorations found on the altars include candles, religious medals, rosaries, prayer cards, fava beans and loaves of bread. Much of the altar, including the citrus fruits and breads will be given away to guests when it is broken down.

The traditional foods served during St. Joseph’s Day are symbolic of both the legends associated with the saint and the very real struggles of the Sicilian peasantry. The fava bean plays a prominent role in the feast and can be seen on both altars and in the traditional pasta dish. Once considered food for animals, the hardy bean was not affected by the droughts and famines of Sicily, making it an invaluable food source to the peasants. Wild fennel and chickpeas were also some of the few plants available to these poor people and thus became important parts of the Sicilian diet. These are just some of the simple and rustic ingredients that go into the unique Pasta di San Giuseppe.

Below : A variation on the pasta having both fava and red beans. The seafood is a mix of fried mackerel and baby whiting (we call them meruzzi) the other tray is baked shrimp.

A fond memory of mine involves visiting my grandparents days before the feast and having every flat surface in the house covered in drying home-made pasta. In the past this could be huge operation often involving several generations of several families working together for the communal feast. While doing research for this article I have discovered that the dish served for St. Joseph’s Day varies among Italian American communities and is often considered a type of minestrone, whereas I always considered it a pasta dish.

In my experiences every family makes it a little different (all of them delicious) but includes the traditional ingredients of fava beans, fennel, cauliflower, chickpeas (sometimes) and flat, broad home made pasta noodles. The consistency ranges from a pasta and vegetable soup, to a pasta dish with a little broth, to pasta in a thick paste. Instead of cheese, many people serve this dish with “poor man’s cheese” – breadcrumbs, which symbolize the sawdust of St. Joseph the Carpenter. Besides the pasta, other dishes may include fish, shellfish and of course bread, but traditionally no meat since the feast falls during Lent.

For those that still have room left, there is always dessert and St. Joseph’s Day means the famous Zeppole di San Giuseppe. Zeppole are basically “Italian doughnuts” simply dusted with sugar, cinnamon and honey or (as usually found on the East Coast) filled with yellow cream and covered with whipped cream. Zeppole are delicious but where I grew up it seems that Pignolatta is more popular. Pignolatta (pronounced bin-u-lath-a in the dialect still heard in my town) is a pyramid of little fried pastry balls covered in honey, nuts and chocolate bits symbolic of a pine cone. Those of Neapolitan descent or other parts of Italy will know this dessert as Struffoli. Also served are equally filling fried ravioli filled with sweetened ricotta or chickpeas, but for those who want something lighter a citrus salad of oranges and lemons is found in many households.

The fact that every family celebrates St. Joseph’s Day a little differently makes the tradition of visiting relatives and family friends even more fun. Trying out all the varieties of pasta, side dishes and desserts can be a daunting but delicious task. Regardless of matter how it’s made or what is served during the meal, it is intended to be hearty and filling, an experience that must have been rare in Medieval Southern Italy.

Over the generations, St. Joseph’s Day has changed as our lives have gotten busier and more secular. Most households no longer have altars and the traditions of visiting other households have dwindled, mostly it seems due to our busy schedules. In my community, St. Joseph’s Day has become more family oriented than community oriented like it was in the past. When Italian Americans were still living in concentrated communities the feast would be large gatherings of several families, but today it is more in line with an extra special dinner with close relatives. However it is good to hear that in Italian American communities across the country traditions are still alive including “Tupa Tupa“, (knock knock) a reenactment of Joseph and Mary seeking shelter. The people portraying the Holy Family would be accepted and allowed to join the feast after knocking three times.

There is always hope that celebrating St. Joseph’s Day will continue since even in cases where much has been lost, some traditions are continued to be passed on – such as making the special pasta. Some older traditions become rekindled by the younger generations, such as creating altars like their grandparents did. If there ever was a testament to the strength of devotion to St. Joseph it would be the City of New Orleans. Not even the devastation left by hurricane Katrina can stop their altar tradition or the famous St. Joseph’s Day Parade.

Thank you for enlightening me on this tradition. I am an Italian descentand and we never celebrated this, grateful to learn. Thank you again.

Much of what you posted was not known to me. Thank you for the posting.

Great to know the tradition continues. Growing up my brother was baby Jesus w/an elder gentleman playing St Joseph and a young girl, Mary They would walk in a procession from our local church to the hall where a huge Feast table was set up.There they were sat at the table for a pasta meal. When my brother got to old I took over for many years…

I live in Connecticut and we celebrate St. Joseph Day. Our Bakeries have Zepolle and Our Churches hold St. Joseph Dinners. They serve Bean soup and of course Zepolles for desert.

I live in Connecticut where St Joseph Day is still celebrated! Our bakeries have zeppole and our Italian parishes serve Bean Soup and Dinners held at the church. Zepolle for desert of course! very special day!

I remember fondly the celebrations that we had to honor our Saint Joseph. Your article was great. The blessing of St. Joseph bread had been done I the past. The feast is alive in our hearts and memories. Ite ad Joseph! Go to Joseph!

Hello James, it’s a really good thing that you carry on your traditions! They are a very important part of what we are.

Thank you for the great article. There are so many traditions that my family tries to keep. Even though we live in Central Pennsylvania, and there are no bakeries around that have St. Joseph pastries, we do our best to honor St. Joseph with other food.