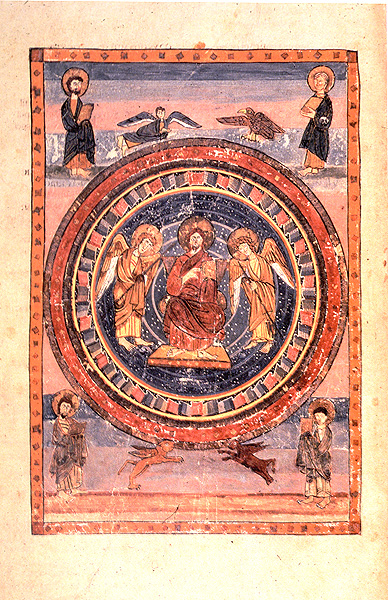 A most intriguing fact has been brought to my attention, and one that I feel slightly ashamed, maybe, for not having known before.  Can you name the important historic connection between Anglo-Saxon North East England and Monte Amiata in Tuscany?  It’s known as The Codex Amiatinus and actually happens to be one of the most treasured pieces of historic work in existence.

It is the oldest manuscript copy of the Bible in its Latin Vulgate form (4th century version), it is said to be the most accurate copy of St. Jerome’s text and features wonderful medieval calligraphy.  St. Jerome was a Roman Catholic thinker and historian, born in Stridon, a town close to the countries then named Dalmatia and Pannonia, now known as Croatia or Hungary. The Codex Amiatinus is a magnificent book made up of a staggering 1040 vellum leaves (an early form of paper produced from calf skin) positioned in quires of 4 sheets or ‘quaternions’ with two columns per page, written in capital uncial characters. Amazingly, it weighs over 75 pounds, measures just over 19 inches in length by just over 13 inches in width, and is 7 inches thick.

At this point, enters Biscop Baducing: born in 628 and enamored with the City of Rome and its Christianity, he became so fond of the order of St Benedict to be given the name Benedict Biscop. He was granted 70 hides of land around 674, from the King of Northumbria, Ecgfrith. Benedict Biscop founded the monastery of St. Peter’s at Wearmouth; a twin institution, St. Paul’s, was to be built after more land was granted at Jarrow.  The style of the monasteries was influenced by Biscop’s fascination for Roman architecture. Can you imagine what it must have been like to travel in the Early Middle Ages? They had to be quite determined and brave to quell the fears of risks and dangers brought about by unsafe traveling and bandits, as well as coping with illness along the way. Biscop introduced masons from France as well as glaziers, who initiated the production of stained glass in England. Incidentally, the great writer and scholar Venerable Bede was born in 673 close to St. Peter’s, where he eventually entered at the young age of seven, to become one of Biscop’s pupils. Venerable Bede’s most famous writing is the Historia Ecclesiatica Gentis Anglorum or Ecclesiastical History of the English People, a five book account written in Latin on Anglo-Saxon times, and the history of Christian Churches in England. Bede died at Jarrow AD 735.

The abbot of Jarrow, named Ceolfrid, once a disciple of Biscop, travelled along with him during one of his long journeys to Rome in 678, and returned to England having purchased a comprehensive and complete single volume Bible in Latin, the Codex Grandior, which was to be placed within the monastery’s vast library. This pandect had been written by Flavius Magnus Aurelius Cassiodorus, who was a statesman, writer and founder of the monastery Vivarium in the southern Italian region of Calabria. In January 690, Benedict Biscop died, his body buried near the altar of S. Peter’s church.  Prior to his death, he instructed to preserve his much loved library, which was then known to be the best in Europe.

Ceolfrid took over the role of abbot of the twin monasteries. A couple years later, in 692, Ceolfrid decided to commission three copies of the Codex Grandior to be written by seven scribes and put together by the monks of Jarrow and Wearmouth.

He wanted a copy each for his  twin monasteries, whilst one was to be a gift to Pope Gregory II. Ceolfrid planned on delivering the gift personally to the Pope in Rome, once the work had been completed. Further land was granted to raise the 2000 head of cattle required to produce enough vellum for the three great Bibles. Eventually, the copies including several full-page illustrations, were finished. It was 716 when Ceolfrid, then 74 years old, along with around 80 followers, commenced his last, long pilgrimage to Rome: he sadly died in Bourgogne, before reaching the Eternal City. Interestingly, it has been said that some of the followers continued the pilgrimage and presented the gift to the Pope. Whatever the case, nothing is known of what happened to the pandect, and how it eventually arrived at the abbey of San Salvatore. This abbey within the medieval town of Abbadia San Salvatore, is situated at the side of an ancient inactive volcano, the Monte Amiata in Tuscany. There, the pandect became known as the Codex Amiatinus. The very famous Via Francigena, used by pilgrims and merchants through France and Italy down to Rome, passes at the feet of Monte Amiata: if only the Codex Amiatinus could talk! We would probably never know exactly whose hands this historic treasure fell into before arriving at the abbey during the 9th century.

However, one fascinating fact has since come to light. After the suppression of the abbey in Abbadia San Salvatore, the Codex Amiatinus was transported to the Biblioteca Medicea Laurenziana in Florence, in 1786.  Many scholars, fascinated by the pandect, had tried to determine why the codex had appeared at Abbadia San Salvatore, when it was noticed the dedicatory verses may have been faked.

The verses told the reader that the codex was a gift to the venerable convent of St Saviour’s (Salvatore) and the written name of the donor was abbot Peter, whereas the recipient was the Abbadia. Indeed these were not the genuine dedications. There were signs that some of the original writing had been erased and someone with a very slightly different hand style had gone over this. It was revealed that the donor was Ceolfrid and the true recipient should have been the Pope.

The names had therefore been forged. Essential for the reconstruction the history of the Codex were Bede’s writing, and the fact that he had remarked that three bible copies had been produced in Anglo-Saxon England. Unfortunately, the Codex Grandior hadn’t survived: just a few leaves had been discovered, which belonged to a copy. The Codex Amiatinus, then, is a true survivor. As well as witnessing various local historic battles, it saw the Black Death, survived two world wars, and the huge 1966 Florence flood, which had destroyed so many other precious objects. It saw the births and deaths of characters such as Napoleon and Galileo as well as Michelangelo, who had actually designed Biblioteca Medicea Laurenziana where the Codex Amiatinus is safely kept, within the grounds of San Lorenzo. In more recent years, a public vote proclaimed Benedict Biscop saint Patron of Sunderland, for having been so dedicated to his faith and for establishing marvellous learning centres. In celebration, a complete replica of the Codex Amiatinus has been made and donated to Sunderland city council.