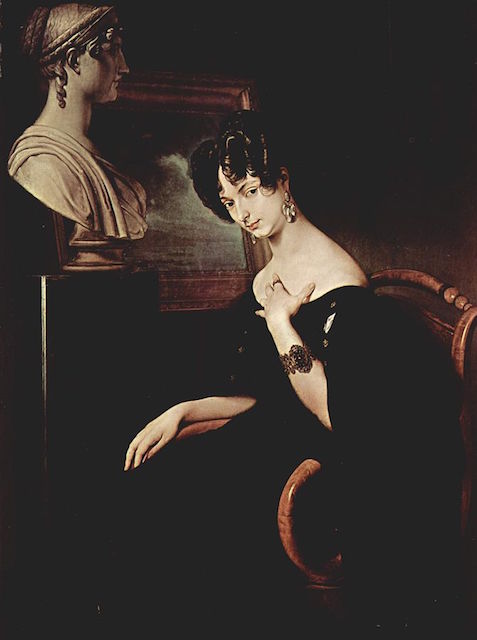 Many women played key roles in the Italian Risorgimento: some  fought with the soldiers, others held secret meetings or helped important men raise funds. Some became nurses, or took charge of hospitals. These fiery women were mostly well-educated and somewhat liberated.  Some were even rebellious members of the aristocracy.

Two women who played important roles in the unification of Italy are Margaret Fuller and Princess Cristina di Belgiojoso, real example of women of the Italian Risorgimento.

Margaret Fuller was an American who  became  one of the women of the Italian Risorgimento, leaving her mark in this period of Italian history.

Extremely well-educated, she studied Latin and Shakespeare from an early age. She spoke fluent French, Italian and Greek before she turned 15. When she came of age, she taught at a school run by Bronson Alcott, Louisa May’s father.

At 29, Fuller joined the great writer Ralph Waldo Emerson in publishing the quarterly The Duel. She also started writing articles herself, as well as reviewing books for the New York Tribune.

When the struggle for the unity of Italy began, she became the first wartime woman foreign correspondent.  She sent articles about the war to the Tribune, hoping to obtain the sympathy of Americans for the cause.

By then, Fuller was 35.  Surprisingly, many European men began taking a great interest in this strong, peculiar woman. Two of them proposed: the Polish poet Mickiewicz and the great Italian revolutionary Giuseppe Mazzini, father of Italian Risorgimento.

She rejected both of them, but she soon fell in love with the charismatic Marchese Giovanni Ossoli and helped him with the revolutionary cause. She told her friends that she was married to the Marchese, but that may not have been true. They did have a son, however, Angelo.

The dedicated woman supported Garibaldi‘s siege of Rome. She also took charge of the hospital Fate Bene Fratelli for Princess of Belgiojoso. The American Consul praised her highly: “The weather was intensely hot; her health was feeble and delicate; the dead and dying were around her in every form of pain and horror; but she never shrank from the duty she had assumed. Her heart and soul were in the cause for which these men had fought, and all was done that a woman could do to comfort them in their sufferings.”

Fuller was writing a history of the Italian movement for unification when she and her whole family were drowned when their ship crashed on rocks during a hurricane off Fire Island.

An Italian woman from an aristocratic Italian family, Cristina Trivulzio of Belgiojoso was also well-educated. She learned Latin, French, English and studied music and the arts. She even made a living by teaching music at one stage. Unlike Fuller, however, she was raised in the world of revolutionary politics. Her stepfather may have introduced her to the Italian struggle: he even went to jail for his politics.

Cristina, born Cristina Trivulzio, married prince Belgiojoso at only 16. The marriage was not happy because of his gambling and womanising. Although the prince eventually left his wife for another woman, they remained good friends and wrote to each other.

Like Fuller, Belgioioso wrote articles to Italian newspapers trying to gain support for the cause. She also asked important politicians, such as Cavour, another icon of Italian Risorgimento, for it. She may even have spoken in the French Chamber of Deputies about the cause.

Courageous and fervent, the princess even financed her own regiment and travelled with them to support the Milanese against the Austrians. She also became known as the Florence Nightingale of Italy: she took charge of the hospitals in Rome, especially the main one, the Trinità de’ Pellegrini, and asked Roman women for help in supplying lint and bandages. She would remain there day and night helping the wounded, according to Margaret Fuller.

These inspirational women of the Risorgimento were different from most women of their day, who often didn’t become involved in politics because it wasn’t ‘feminine’ and indulged in more womanly pursuits.

The female politicians and political fund-raisers of today can thank also these Risorgimento women for showing the way forward.