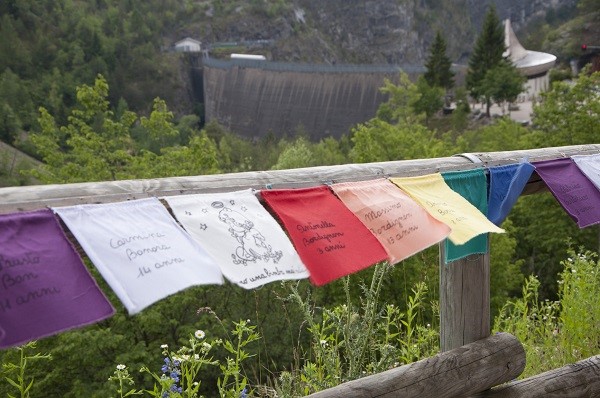 The Vajont is a stream flowing in the valley of Erto and Casso before merging with the Piave River in Langarone and Castellavazzo, in the Belluno province (Veneto).

On October 9th, 1963, at 10.39 pm, a terrible disaster happened. A big piece of the Toc mountain fell into the artificial lake created by a dam on the Vajont river, giving life to a huge wave that covered the towns beneath the dam and killed probably 1,910 people. The disaster did not cause the breakage of the dam, that was strong enough, but the huge landslide that fell into the artificial lake displaced enough water to create a 200-metre-high wave that crashed onto the Piave valley below like a Tsunami wave.

The catastrophe was caused by three main factors:

1. Tha dam was built in a valley geologically not adequate

2. The height of the dam was increased over safety limit, because constructors wanted to build the biggest dam in the world

3. The inhabitants of the towns beneath the dam were not warned of the danger during the evening of that unfortunate day

Previous alerts about the risks of the Vajont dam

Before the disaster happened, some events foresaw what was about to take place.

In 1959 there was a landslide at a dam in nearby Pontesei, where the mountain had a similar geological structure, and in 1960 a small landslide fell into the lake of the Vajont dam. Furthermore, during the construction of the dam, some fractures appeared on the side surface of the Toc, and the land shook a few times. None of these facts stopped the works and the replenishment of the new dam, in which too much money had already been invested and that was meant to create large quantities of electricity.

Tina Merlin, a journalist of L’Unità, tried to inform the public about the risks involved in the construction of the dam, but she was accused of giving false information, of causing useless alarmism and acting against progress. Various geologists who warned about the danger of the dam were dismissed.

History of a foretold disaster

First unauthorized excavations on the site of the dam took place in 1956. It was immediately clear that the land was friable. The concrete used to build the abutment of the dam was absorbed by the rock. For this reason SADE, the company in charge of the construction of the dam, decided to defer the explosions needed to dig into the land, and to use a lower quantity of explosive.

Carlo Semenza, an engineer designated to check the state of security of the dam, highlighted in various occasions that the structure was weak, but the Commission that had to decide for further works and adjustments, had among its members three of the people who had approved the project in the first place: they could not admit that what they had previously approved was not perfect. So no further actions were taken. Also, SADE was to become ENEL, the National Authority for the Production of Electric Power, so politics was involved: finishing up the construction of the dam was essential.

The geological studies used to support the work of Semenza were very superficial. In charge of them was Giorgio Dal Piaz who, at the time, was quite old and did not have the strength to do the appropriate surveys. Instead, he based his opinions on experience. During the construction of the dam some problems related to the nature of the rock emerged and further geological studies were carried out. In spite of them, works did not stop.

Prof. Caloi was one of the specialists called to study the terrain of the mountain. On his first survey, in February 1960, the rock was strong and solid, with 12 metres of debris on the surface. On the second survey, started in December of the same year, he noted that there were 100-150 metres depth of debris and shattered rock on the surface. The increased amount of crumbly terrain was due to the seismic shakes that became a common occurance with the construction of the dam.

Muller was another specialist appointed to study the situation. In his report, dated 1961, he declared the extreme danger of the dam. The report was never sent to the authority in charge of checking the security of the site. Muller also noted the water level in the dam influenced the instability of the mountain. In the meanwhile, little landslides continued to occur and could not be stopped.

Geologists Franco Giudici and Edoardo Semenza (son of Carlo Semenza) also forecast a landslide of 200 millions cubic metres was possible, but their report was never sent to the authority, either.

The first replenishment of the dam with water took place in February 1960, up to the height of 600m (again, unauthorized: the authorization arrived only one week later). On November 4th of the same year, a 700.000 cubic metres piece of land came off the mountain, but without causing any damage. Nonetheless, the level of the water was raised to 655 meters and in 1963 up to 710 meters, 10 above what was considered the safe level. The continuous land movements were considered safe and not alarming.

In the last month before the disaster, the inhabitants of nearby villages were worried by the frequent roars, but no one advised them to move. The level of the water was eventually lowered, but it was not sufficient to prevent the disaster.

At 10.39 pm  on October 9th 1963, 270 million cubic metres of rocks and debris fell off the side of mount Toc and landed into the dam created on the Vajont river 3 years before. 3 kilometres of forest, fields and villages fell into the lake, causing a roar, an earthquake and two huge waves. The first one wiped out the towns around the lake, the second one passed over the dam and crashed into the underlying valley with an incredible speed and strength. It swept away the town of Longarone, crashed against the mountain and returned back into the valley digging a bit more. When the people already asleep in their homes heard the roar of the big wave arriving, they could do nothing to save themselves.

“That event was not a tragic, inevitable disaster, but the dramatic cause of precise human negligence that must be denounced and the responsibility for which cannot be avoided”, president Napolitano said in a message during a commemoration event in 2013, 50 years after the disaster.

Longarone and the other towns of the valley have now been reconstruced.

Various movies have been filmed about the Vajont disaster. One in particular, “Vajont” by Renzo Martinelli, 2001, is a good presentation of the events before and after the overflowing of 1963.

Vajont, the movie by Renzo Martinelli

The longing for power and money (more water in the dam equalled more profit) and the pride of having the highest dam in the world, left in the background the life of 2000 people.

October 9th has become the Vajont tragedy’s Memory Day: because we cannot allow that other innocent people die just because of our passiveness. Before the Vajont disaster we were told that something was wrong and could cause big damage, but we did not listen.