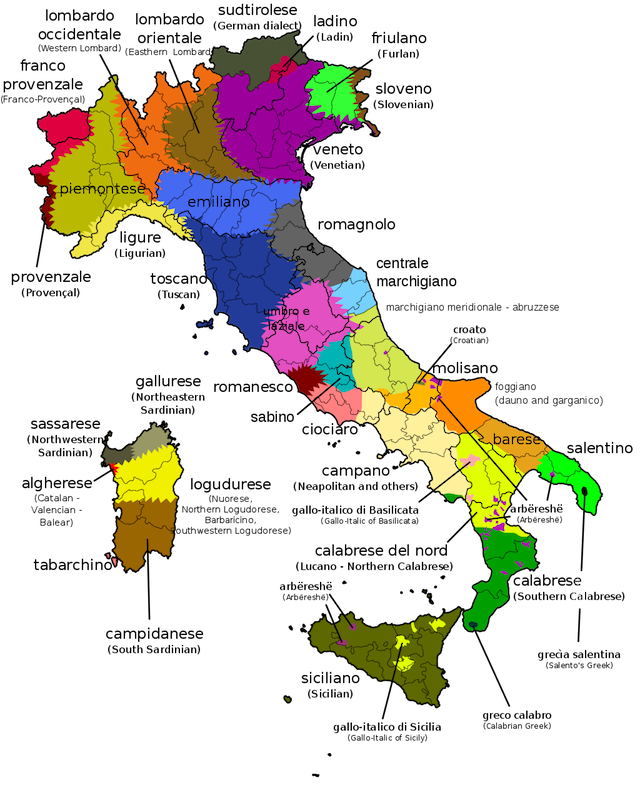 While the Italian language is not exactly universal, it has spread to regions beyond its native land. Italian can be heard throughout all of Italy, as well as in the southern parts of Switzerland, in the Vatican, in Corsica, in Slovenia and Croatia. Some Italian is also spoken in countries which used to be Italian colonies, such as Abyssinia, Eritrea, Somalia and Lybia, in Africa.

Above: a funny video on moms’ different dialects around Italy

The evolution of the Italian language from Latin occurred at a deliberate and leisurely pace over the course of hundreds of years. This resulted in many varying dialects of Italian. Though all of the dialects are classified as Italian, they are quite distinct and can be difficult to recognize as the same language. As you can imagine, some of the most distinct versions of the Italian language occur on the islands of Sardinia and Sicily, regions completely separated by water from the mainland on the Italian peninsula. A group of the dialects in the northern and northwestern regions of Italy are known as Gallo-Italian and show much influence from the French language once spoken throughout the north western regions of Italy. The areas surrounding the famous city of Venice exhibit yet another distinctive dialect of the Italian language.

The Tuscan dialect hails from central Italy and is probably the best known among all Italian dialects. During the 14th and 15th centuries, Tuscany became central to Italy’s commercial and diplomatic power, largely due to the immense growth of the city of Florence. The Tuscan dialect is also the one that most strongly resembled Latin, which made it favorable among famous Italian politicians, philosophers and writers of the time, who usually preferred the Latin language over any other. These prominent members of society made the Tuscan dialect popular in regions throughout Italy. Famous written works, such as Dante’s Divina Commedia and Petrarca’s Canzoniere also spread the popularity of the Tuscan dialect, which was now considered “Italian”. Thanks to such pieces of literature, Italian gained recognition and passed from a language only good to talk about trivialities, to being good enough to discuss about philosophy in it.

With the formal unification of Italy in 1861 Italian finally became the official language of the nation. The appearance of a collective Italian language signified the unification that took place among Italians at this time, which was also evident in Italy’s political scene, educational system, and economy.