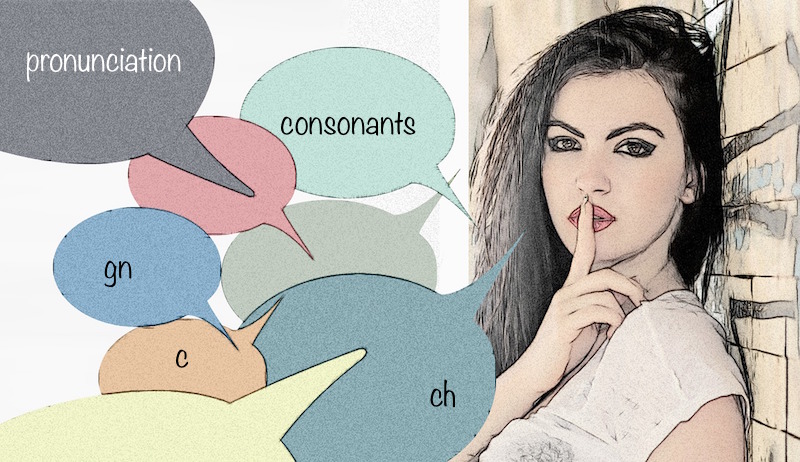 Most Italian consonant sound the same as in English. However, there are a few spelling peculiarities you should take notice of:

Two other tricky sound combinations are gl and gn.

gn like gnomi is pronounced soft, as in gnocchi (where the g is soft but the ch is hard)

Another important difference is with double consonants. In English, it usually makes no difference but in Italian it does. A double consonant is pronounced over a longer period of time than a single consonant. You already know one example: the pronunciation of pizza.

For some consonants in particular: t, d, c, g, p and b there is no way to lengthen the consonant sound. Instead you stretch the holding period before you release the consonant – for instance there is a difference in Italian between fato (fate) and fatto (fact).

Play the second recording to hear the pronunciation:

The most problematic double consonant is the Italian pronunciation of the letter r – The English language has nothing like that and only people really fluent in Italian can master.

It can be difficult for beginners to pronounce words like:
birra (bear), chitarra (guitar), ramarro (green lizard), corro (I run), carro (cart), corrida, and many more…

Most people already know how to pronounce:

For example in “pasta” ? pesto, cesto, costo, pastello, pescare.
When followed by C and e-i the sound is soft.
Like in pesce, while pescare is hard. Pescare (fishing) and pesce (fish) have two different pronunciations.

When is ‘s’ pronounced as ‘z’ when is followed by a consonant? Which consonants?