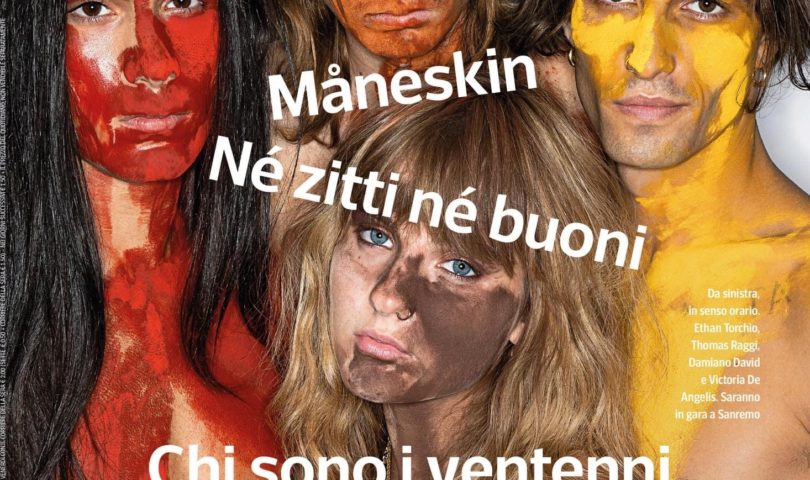 Picture this: four young friends in Rome. They dream of living and doing music. While their story starts from the Italian capital, their goal is the horizon. And, to reach it, they audition for X Factor Italia.

Suddenly, the Måneskin are on everyone’s mouth -and playlist.

How it all began

Damiano, Vittoria, Thomas, and Ethan have known each other from middle school. But they started playing together in 2015. The name Måneskin comes from the Danish. It means “moonlight.” It evokes a melody that cuddles yet challenges you.

And that’s exactly what their music did, when the band participated to X Factor.

Two years after the groups’ birth, the four friends swept away the Italian audience. Their music is a mix of rock and pop, topped with the reggae voice of Damiano, the lead singer.

Their mentor was Manuel Agnelli, the frontman of the rock band Afterhours. Under his wing, the Måneskin charmed the viewers and the music industry. So much so that they ended up in the podium. They celebrated their silver medal with the EP Chosen.

However, the real boomed happened with the song Morirò da Re. I will die as a king.

And even when I’ll be sick, I’ll be too much tired

As fire I’ll step to take everything

That is waiting and be ready to face the pack

I don’t want to come back, now I’m leaving

So baby wipe your tears, Baby drink up from my plate

Yes, you can land on your feet even from the high

Life after the talent show

In 2018, they released the hit Torna a Casa, which played for months on both radio and TV. The song speaks about Marlena, a girl that needs to come home. She’s a girl who can leave the cold out.

“Marlena is our idea of youth,” said the Måneskin to Vogue Italia, “we made it real to make it more powerful.” While they are having fun with their music, they want to spread a positive message. The message of smiling, no matter what.

They also take inspiration from their concerts, from the thrill of being in front of their audience. They value the exchange and connection with their supporters. That’s how the Måneskin created their first album, Il ballo della vita. It’s the “dance of life,” indeed.

The band is ready to conquer this new year.

The first big news? Their participation in Sanremo with the song Zitti e buoni. From March 2nd to the 6th, you can see them on stage. The second big news is the release of their second album, titled Teatro d’ira, “theater of wrath”. More than album, this is a project. A year-long project in which supporters can follow the Måneskin. Though their creative process and their musical experiences.

“Our anger is not directed at someone,” said the Måneskin, “our wrath moves and it creates revolutions. It’s against the oppressors.”

The third news is the song Vent’Anni, twenty years. The fourth news? The photoshoot with Oliviero Toscani. In which the band is naked. Literally and figuratively. Once again, they wanted to express freedom. It’s love, with no prejudices.

The Måneskin mania conquered the Sanremo Festival in 2021. Their song Zitti e buoni gave them the final victory. Here’s the band, playing on the Italian stage.